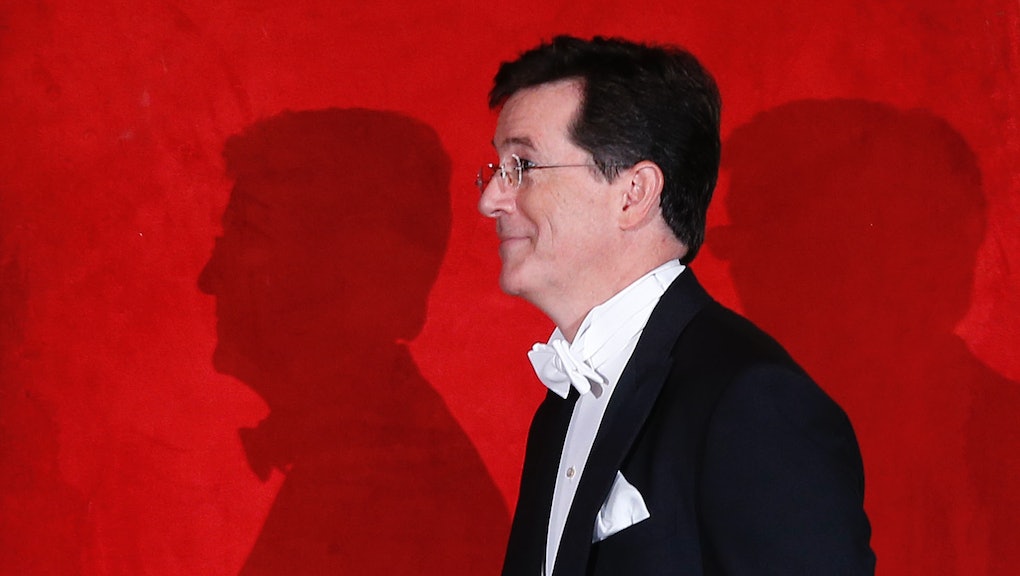 "Simply being a guest on David Letterman's show has been a highlight of my career," Colbert said. "I never dreamed that I would follow in his footsteps, though everyone in late night follows Dave's lead."

"I'm thrilled and grateful that CBS chose me," he added "Now, if you'll excuse me, I have to go grind a gap in my front teeth."

And Colbert is apparently in it for the long haul, signing off on a five-year contract with CBS. Here are three very important reasons he got the slot.

1. He fits into the new age of late-night hosts perfectly ...

The Colbert Report's Colbert will be joining Jimmy Fallon and Seth Meyers (both of SNL, and in particular the show's popular Weekend Update segment) as part of the new generation of younger, news-oriented talk-show hosts. Both Fallon and Meyers have been crushing rival hosts Jimmy Kimmel and Letterman in the youth demographic, with Fallon beating the combined viewership of the two shows. Networks have been scrambling to pick up funny faux-newsmen, with reports indicating CBS also solicited former Daily Show correspondent John Oliver to replace Craig Ferguson on The Late Late Show.

Networks are looking for familiar faces with experience in making current events sound hilarious, and it's no coincidence that virtually every one of the new hosts have spent time behind a "news" desk. Viewers want a new generation of hosts familiar and accessible to young people (and more importantly, networks need to lure a larger audience in the profitable 18-49 demographic).

As PolicyMic's Eileen Shim previously noted, "The seeming consensus around Colbert also demonstrates that even though TV execs are trying to shake up the late-night scene, they don't want to stray too far from one tried-and-true ingredient: middle-aged white men."

Slate's Amanda Hess points out this isn't really very surprising, considering the late-night show formula: "Celebrity self-promotion vehicles packaged with broad, sanitized humor that is highly topical but rarely actually relevant ... funny to everyone, and hilarious to no one." Letterman was by and large the exception — ditching conventions (including being nice to guests he didn't like), deferring to network executives, and not sleeping with his staff — but he's faltered over the course of his exceptionally long career. The always-brilliant Colbert seems the most likely to rejuvenate The Late Show, but he probably won't revolutionize the genre. (There won't be any in-character racism, for one.)

3. His online presence is incredible.

Fallon has been maintaining extremely strong numbers, and a big part of that might have to do with his ability to project The Tonight Show's brand across social media. Lost Remote paired with social analytics company uberVU to analyze Fallon's ratings from March 11-20 and found that he was dominating Twitter, accruing some 431,280 mentions in those weeks alone. And segments like Kevin Bacon's Footloose dance, which got 8 million views on YouTube in the first few days alone (now up to 12.5) are helping push Fallon's ratings to a new level.

Colbert has 6.2 million followers on his personal Twitter alone (half of what Fallon has), but the more important factor will be how he's built a loyal audience that religiously follows his work online.