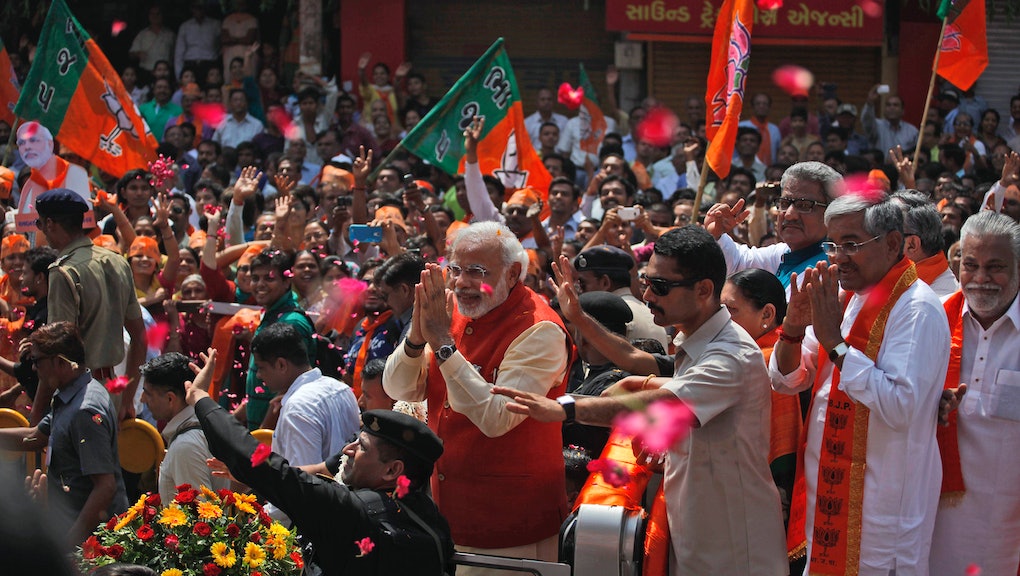 Narendra Modi is the leading candidate in the world's biggest election and a rather controversial figure.

A potential victory for Modi has led to warnings of a grim future for India. A letter published in the Guardian signed by a group of artists and lawyers, including famed novelist Salman Rushdie and Indian artist Anish Kapoor, warned that his victory would "bode ill for India's future as a country that cherishes the ideals of inclusion and protection for all its peoples and communities."

His victory means more than fodder for debate in Western newspapers: If he were to win, it would be the beginning of a whole new dynamic for India's relations with the West.

Modi posits himself as the CEO in the making for a country that has long since tired of rampant corruption plaguing its ruling party. The myths surrounding the man include the fact that he sleeps only about three hours a night, has a very conspicuous lack of family ties and no inclination toward any pastimes other than early-morning yoga.

The chief minister of Gujarat (a northwestern Indian state), Modi belongs to the Bharatiya Janata Party (BJP, as it is commonly abbreviated) and is also the party's prime ministerial candidate in the ongoing general elections. This means that if the party were to defeat the incumbent party, the Congress, he would be the holder of the top-most office in the nation.

Here's why we need to be worried about Modi:

He has a history of right-wing Hindu nationalism.

In addition to his carefully cultivated image as that of an economic fixer whose state was the only one to claim development while the rest of the country's economy suffered, Modi also has a long-standing history of right-wing Hindu nationalism. He is known for his thinly veiled anti-Muslim rhetoric, whether it be denouncing political opponents as Pakistani "agents" or his anti-beef stance (strict Hinduism forbids the consumption of beef).

His government did nothing to prevent a riot that killed 2000 people.

Even more worrisome is the fact that during his term as chief minister of Gujarat, the state was swept by a violent riot against the Muslim community, and it led to a death toll of nearly 2,000 people. Modi's government was accused of consciously having aided and abetted the violence. In subsequent interviews, Modi has not once acknowledged nor taken responsibility for his actions.

In a 2002 interview with the New York Times, shortly after the riots, he admitted that his greatest regret was not having handled media queries better.

In 2013, in an interview with Reuters, his remarks on the riots sparked a nationwide furor when he compared the victims of the violence to running over a puppy.

"If someone else is driving a car and we're sitting behind, even then if a puppy comes under the wheel, will it be painful or not? Of course it is," he said. "If I'm a chief minister or not, I'm a human being. If something bad happens anywhere, it is natural to be sad.

Because of this, the U.S. also distrusts him.

In 2005, the U.S. State Department denied him a visa to visit the States, on grounds of his involvement in the 2002 riots. More recently, Rep. Frank R. Wolf (R-Va.) urged to "never to grant a visa to allow Chief Minister Modi to visit the United States under any circumstances." If Modi were to become the prime minister, however, it would put the U.S. in a bit of an awkward position, as he would automatically be eligible for a diplomatic visa as a head of state.

He has a secret wife. Sort of.

On the subject of his perennial bachelorhood, both his party and Modi have been tight-lipped. The latter has only repeatedly chosen to emphasize how as a single man, he is less prone to indulge in corruption.

However, as the New York Times reported this week, he recently changed his official biography, acknowledging that he is, in fact, married. He abandoned his wife in his youth as a member of the RSS, a Hindu nationalist organization that mandates a vow of celibacy. The casual acknowledgement is an indication that it was done to avoid intense scrutiny as he became the front-runner for prime minister.