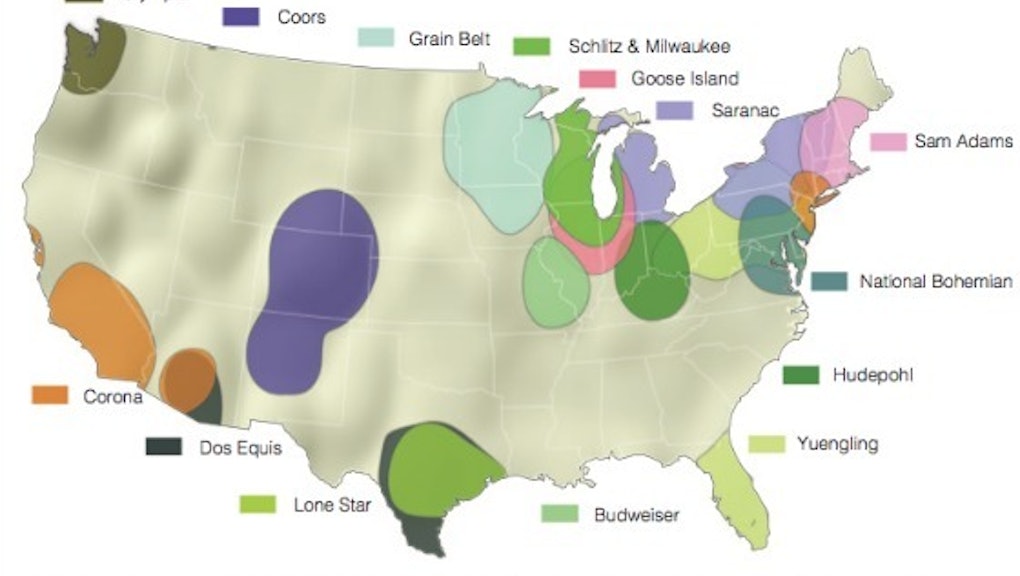 Which Beer Is Most Popular in Your State? Check These Maps

From University of Kentucky geographer Matt Zook and colleague Ate Poorthuis, these beautiful maps claim to show the geography of beer across the nation.

Usually, these things are always more for fun than serious consideration — like this map, which is just an assessment of a state's most "iconic" beer. Sometimes a slightly more insidious agenda like marketing emerges, such as this map by Blowfish that claimed somewhat implausibly that Blue Moon and Sam Adams were the nation's favorite beers. But the new maps used millions of geotagged tweets from the larger DOLLY database to determine which beers were discussed where across the country.

The researchers claim that the maps they've come up with closely match the "historical and material presence of beer production and consumption" across the country. Zook and Poorthuis conclude: "In short, this exercise in mapping georeferenced social media about beer shows how tightly imbricated the material and digital worlds are in the twenty-first century."

This map compares which regions in the U.S. are partial to wine, beer, or a little bit from glass A and stein B:

Beer reigns in the heartland, according to the data, while wine seems to reign on the coasts (including, bizarrely, Florida — snowbirds maybe?).

This map explains which cheap beer is drunk where:

While this much more intriguing series of maps breaks down individual brand popularity across the country:

It's dispiriting Bud Light is so popular compared to cheap and much better alternatives like Yuengling, but I for one am glad Corona is being outperformed pretty much everywhere but SoCal.

Finally, this map tracks some smaller brands and "clusters them spatially based on a percentage comparison to their aggregate mentions." The result is a very complicated picture of beer markets as they come across online:

Some caveats: There wasn't much data to observe for much of the West. The researchers note that "These areas are lightly populated, which equates strongly with low levels of tweeting activity, and therefore remain uncategorized in this map in a repetition of the classic 'interior unknown' labels of nineteenth century colonial maps." And since the study relies on indexed tweets, it reflects Twitter's demographics rather than the general population. Additionally, because of the tweets are geotagged, this could mean that someone was tweeting while not at home or not necessarily tweeting positive things.

Despite these drawbacks, it's certainly an interesting picture of America's drinking habits and one that shows that despite our differences and tastes preferences, pretty much everyone likes beer. And that's a good thing.