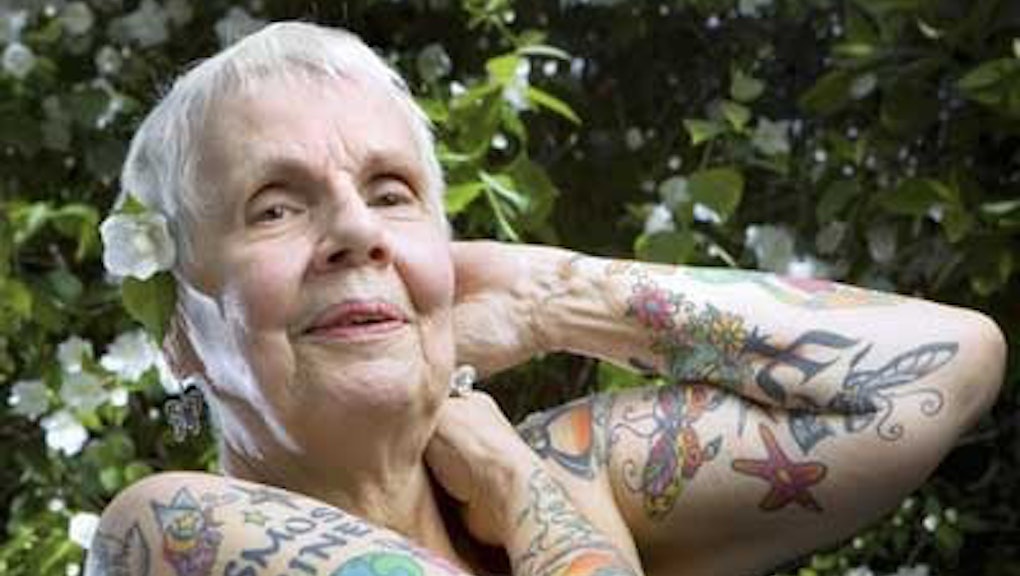 These Tattooed Seniors Show That Aging With Tattoos Looks Amazing

The same question always comes up when you announce your plans to get a tattoo: "But what's it gonna look like when you get old?"

The fear of sagging skin and fading colors deters many from getting inked with an image they love, but these photographs of tattooed seniors prove that ink can look even more badass and beautiful the older you get.

Tattoos have had a tumultuous history and weren't always the tell-tale sign of someone young and fashionable. Sailors regularly wore them in the 19th century, they are horrifying reminders of Jews imprisoned during the Holocaust and criminals and prisoners donned them in the 20th century. Needless to say, tattoos' road to mainstream culture has been rocky and history-filled.

The latter half of the 20th century saw a massive tattoo uptick in popularity, particularly among our generation. It often seems more unique not to have a tattoo than to have one. In fact, 36% of Millennials have at least one tattoo, indicating that more than a quarter have opted for one and the rest of us have fully embraced the form. In 2014, it's not uncommon to have an acquaintance practiced in the art of the stick-and-poke DIY tattoo — or to come home from a night out in Brooklyn with a new word or image scrawled onto your skin.

But what happens when a temporary trend leaves permanent marks?

The tattoo series on Imgur unfortunately does not give praise to the artist behind these shots — or photo alterations, if that's what they are — but either way, the images answer the thought-provoking question we've all probably had in mind during one tattoo pondrance or another.

To all my tattooed brethren, if the images provided aren't proof enough I'll say it explicitly here: We can fully stop worrying about what tattoos look like when we get older. These images prove, they're just going to look straight-up awesome.