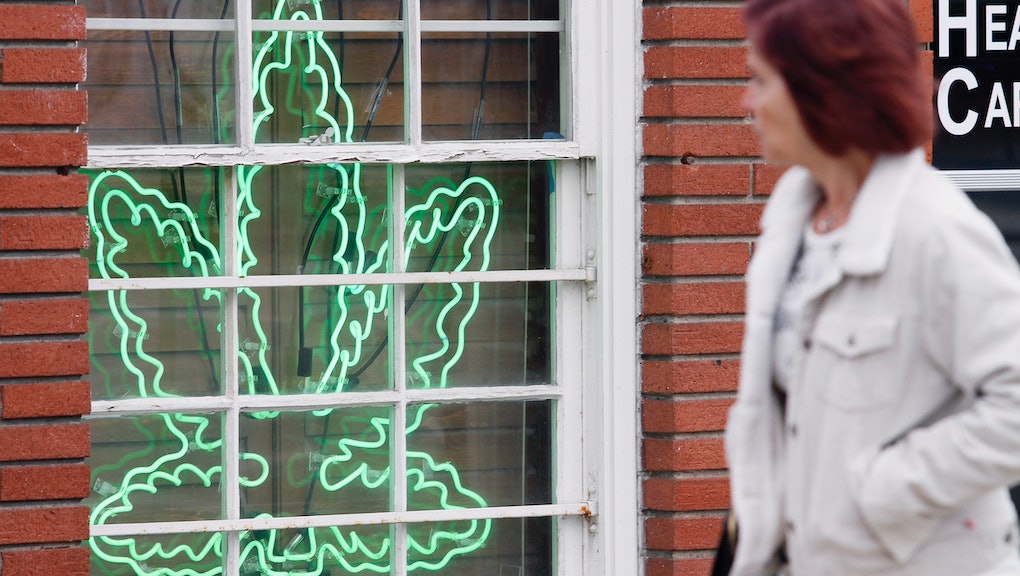 It's alarming that today in the U.S., there are more people behind bars for committing drug offenses alone than there were in 1980 for all offenses combined. This fact — from Michelle Alexander's 2010 book The New Jim Crow: Mass Incarceration in the Age of Colorblindness — is disgraceful. The roots of the problem lie in former President Nixon's 1971 "all-out offensive" war waged against drugs in the United States. But in a new report, the Vera Institute of Justice found that since 2009, 30 states have passed 50 bills that reform how their criminal justice systems define and enforce drug offenses. Sorry, Mr. Nixon.

Peggy McGarry, director of the Vera's Center on Sentencing and Corrections, wrote in the recent report, "The growth of mandatory minimum sentences and zero-tolerance sentencing practices have contributed to the massive increase in prison populations, while uneven enforcement has caused the devastation of communities on the frontlines of drug interdiction and enforcement activities. Until now."

Vera found that the states accomplished reform mainly by enacting changes in the following ways.

2. Modifying drug sentencing schemes. An example here is passing legislation that legalizes, decriminalizes or lowers penalties for the possession of small amounts of marijuana.

3. Expanding access to early release mechanisms. In some states, offenders can reduce their sentence length by earning good-time credits through demonstrating good behavior or participating in a drug treatment program, for example.

4. Expanding or strengthening community-based sanctions. This includes, for instance, increasing the use of incentives for drug offenders by permitting a reduction in offense class from a felony to a misdemeanor upon the successful completion of probation or drug treatment.

5. Ameliorating collateral consequences. Many states passed new laws to alleviate the burden of civil penalties that attach to convictions for drug offenses, such as restrictions on housing, employment and occupational licensing.

The map below indicates the states that have enacted legislative changes — and which changes — since 2009.

Real reform is possible, but perhaps we have to convince our leaders that it's also economical.

Prisoners under state jurisdiction accounted for 86.1% of the total U.S. prison population in 2012. State spending for corrections reached $52.4 billion and has been greater than 7% of overall general fund expenditures every year since 2008. According to the U.S. Bureau of Justice Statistics, state spending on correctional institutions accounts for 75% of state correctional expenditures. This means that a relatively small amount of corrections money is going toward probation, parole or anti-recidivism and reintegration programs for ex-offenders to assist with housing, education and work.

We have more to be concerned about.

From 2002 to 2010, capital outlays (infrastructure, construction and building expansion) made up less than 5% of state correctional expenditures, compared with 13.5% at one point in the early 1990s. This is troubling because while the number of incarcerated persons has skyrocketed over the past 30 years to a staggering 2.4 million, prison space has not expanded to accommodate it.

Only nine states have reduced their prison population over the past few years: California, Texas, North Carolina, Colorado, Arkansas, New York, Florida, Virginia and Maryland. This fact sheet includes total state costs of prisons as well as average annual cost per inmate for each state. For example, in New York, the total state cost of prisons in 2010 was $3.6 billion and the average annual cost per inmate was $60,067. In California, those numbers were $7.9 billion and $47,421, respectively. The map below shows the percentage of a state's spending outside of the corrections budget for 2010.

Nixon-era drug laws are not only ethically questionable, they are also economically unsustainable. For this reason, there might be hope politically. The need for criminal justice reform is actually something that players from both sides of the aisle agree on. It's an issue that has turned Attorney General Eric Holder and Republican Sen. Rand Paul (R-Ky.) into unexpected allies. Let's hope the progress continues.