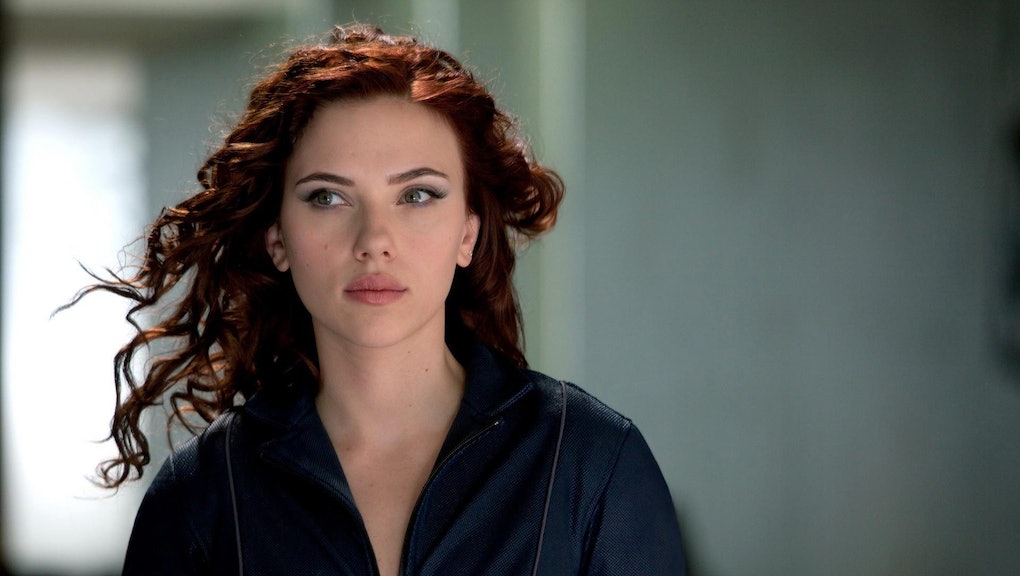 For those who spend time thinking about the role of women in film, conventional wisdom has it that Natasha Romanoff, the character played by Scarlett Johansson in the Marvel movies — most recently in Captain America: The Winter Soldier, but also in Iron Man 2 and The Avengers — is a significant step forward for the cause of gender equality amongst superheroes. A female action hero who can really hang with the boys, Romanoff (aka Black Widow) fights alongside Iron Man and Captain America, and better yet, she is not a romantic love interest for either of them (well, not yet, anyway). She is pretty close to their equal, and even in 2014 that’s kind of a big deal.

But let's not break that glass ceiling quite yet. It's true that the prominence of Black Widow in the Marvel film universe is a sign of progress. For years, Hollywood has resisted depictions of strong, independent women in lead roles, despite the fact that the strong female protagonist is rapidly becoming a reliable box-office draw (see Gravity, Frozen and The Hunger Games for recent examples), but they have not quite cracked the superhero movie genre in a meaningful way. Black Widow, for example, takes a clear back seat to her male counterpart. More important, those female superheroes who have of late anchored a film or played a prominent role in one, all have something in common: They don't have superpowers.

Black Widow is an assassin who has worked for the KGB and S.H.I.E.L.D., but she's just a woman who knows how to fight. The same goes for Jennifer Garner's Elektra or Anne Hathaway's Selina Kyle (aka Catwoman) in The Dark Knight Rises, both of whom are fierce fighters and smart as a whip but still are bound by the laws of nature.

In some ways, these films paint a progressive picture of gender relations, and they could provide important role models for the next generation of women; but without superpowers, these strong, independent women will always be second-class citizens to the male superheroes. Despite Black Widow's ability to kick ass and take names, she is never really a formidable threat. She never fights anyone with superpowers because if she did, she would lose.

It's the same story for Elektra and Catwoman, who notably also wear skin-tight outfits that show off their assets, and Hit Girl in the Kick-Ass films, which take things to a new, twisted level by making their female superhero not just sexualized, but also a child. Male superheroes are rarely seen as sexual objects and often remain hidden behind masks (Spider-Man), armor-like suits (Iron Man) or a ghoulish alter ego (Hulk).

Of course, most of this is a matter of marketing. The objectification of women in film may be inevitable as long as men ages 18-39 remain Hollywood's most prized demographic, but making a movie about a genuine female superhero — with actual superpowers and not in a supporting role — would be a huge step in the right direction.

It would reflect what we all know to be true: That our society is ready to incorporate the notion of a super powerful, independent woman into our cultural identity. If the Wonder Woman film murmurings are true, we could see this in the next few years and we will definitely be seeing her character in Batman/Superman. Let's see if the film gives her enough screen time.

There are a few other strong female characters who are currently edging pop culture in the right direction, and while they don't exactly have super powers, they have nearly the same impact as if they did.

Katniss Everdeen is not a superhero, but she's as good with a bow as Hawkeye in The Avengers. Further, her character seems specifically designed to challenge traditional gender roles. In the original film, there is a moment when she and Peeta split up so that she can take on a dangerous task, and he can go pick berries. It's a sharp inversion of the hunter-gatherer roles men and women have occupied for thousands of years. Of course, Peeta can't even do that right; he picks poison berries, and Katniss has to save him, which underlines her dominance over him.

Despite the increasing presence of characters like Katniss who provide strong female role models for young girls everywhere, a heroine with superpowers is still an important benchmark for our society to meet. The superhero genre reflects so many of our contemporary political and social realities, and audiences both need and crave this mirror.

Such a character is already in the works, and audience members at screenings of Captain America: The Winter Soldier may have seen her, except her name isn't Black Widow. Playing before the film was a trailer for Luc Besson's Lucy, which also features Johansson, this time as a woman who is kidnapped and forced to be a drug mule. What makes her situation particularly unique is that the drug she is carrying is not cocaine or heroin; it's an experimental drug that allows the user to access up to 100% of her brain. When the drug leaks into her bloodstream, Johansson essentially gains superpowers — everything from super strength to telekinesis and the ability to physically mutate in an instant.

Unfortunately, Johansson still appears to be highly sexualized in the film, or at least the trailer sells it that way. But she also appears to wield enormous power, the kind that female superheroes have almost always been denied thus far. Director Luc Besson loves to work with strong female protagonists (La Femme Nikita, The Messenger: The Story of Joan of Arc, Colombiana), but this would be his first time working with an actress as famous as Johansson, who has the star power to get enormous attention for the film and really drive a discussion about gender equality.

It's always risky reading too much into a film just from the trailer, but there is a chance that Lucy could represent the next stage in our social evolution as a a super powerful woman. Black Widow, despite all her skills, just isn't that.