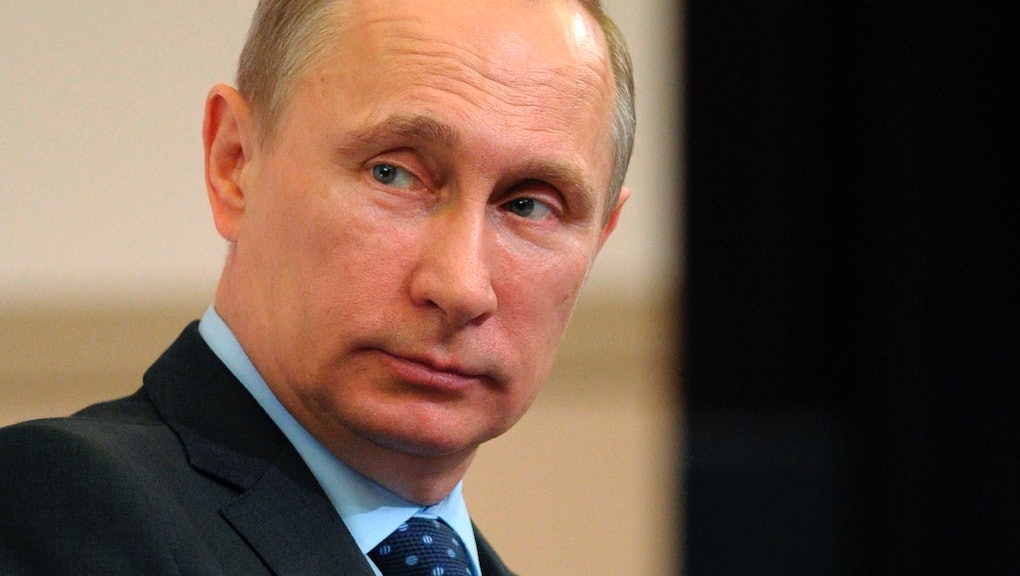 Think Ukraine Is on the Brink of Civil War? That's Because Putin Wants You To

Russian President Vladimir Putin is making dire noises about the possibility of civil war in Ukraine. The eastern Donetsk region has declared itself its own republic, and reports of fighting between protesters, rebels and pro-Russian forces are coming from all sides. Meanwhile, world leaders are warning each other all over the place, and the markets don't know what to do.

You don't have to be a president to see that things keep getting scarier in Ukraine. What's worse is the possibility that the whole world is being played. The Kyiv Post is reporting that audio has leaked proving that paramilitary forces in eastern Ukraine are in communication with and acting under the support and orders of forces within Russia.

Euromaidan PR, the independent media site operating in Ukraine, has posted an English translation of a six-minute wiretapped conversation between an alleged pro-Russian subversion group in Sloviansk and its leadership. Four operatives, going by code names like "Nose" and "Shooter," discuss strategy, weapon stockpiles and requests for reinforcements with phone numbers bearing a +7 Russian country code.

At one point, the operatives are given instructions for contacting a Russian TV network to pass along misinformation and "rebel demands:"

I want to coordinate you with live channel of LIFENEWS from Moscow. I will give them this number, they will call you. Do not identify yourself. Or take your deputy guy, the one with Ukrainian accent, and have him identify himself as deputy chief and clearly explain the situation, that everything is fine; enemies backed off with big losses and we have no loss. And that your demands are: immediate federalization of Ukraine, Governor's election latest 25th of the month, and that the Rada [Parliament] cannot further take external credits without approval by 2/3 votes from the Region. This is essential.

Outside news sources are being careful to say that they have not yet independently confirmed the veracity of this tape. We already know to be wary of propaganda in this conflict.

If this thing is real, it seems shady to say the least that Putin is warning Ukrainians to settle down and control themselves when this sort of activity is also in the mix.