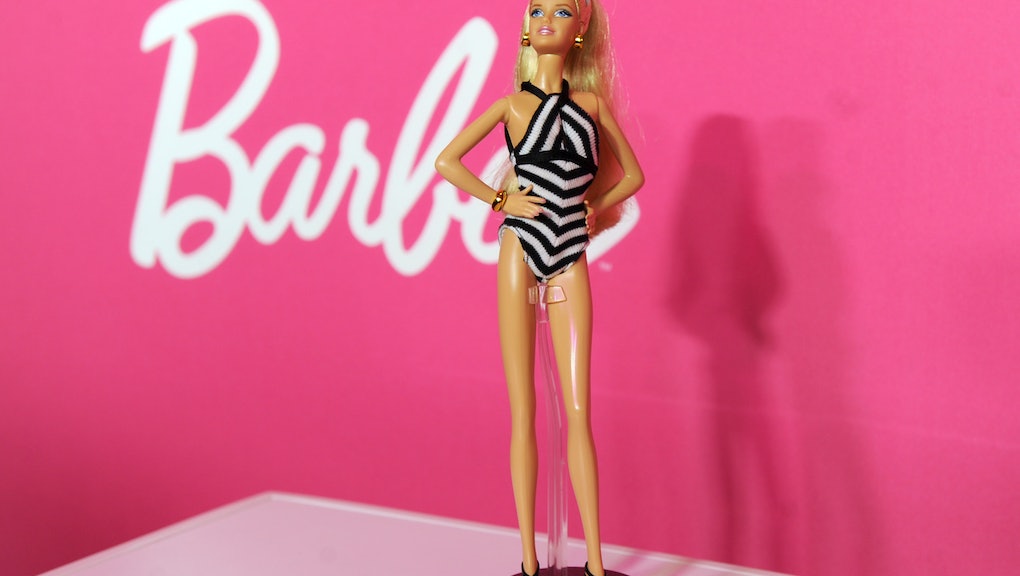 What Little Girls Believe They Can Achieve, When Playing With Barbie vs. Mrs. Potato Head

Say what you will about the size of her waist, but Barbie is one of the most professionally accomplished toys in existence. Since her debut in 1959, Mattel's ubiquitous doll has tried her hand at more than 130 careers, from ballerina to astronaut to zoologist.

But is Barbie's resume inspiring the next generation of real girls to attempt similarly diverse careers? It doesn't look like it. A new study published in the journal Sex Roles that suggests playing with Barbies can actually stunt little girls' career aspirations.

It looks like feminists were right all along: Barbie is bad for girls, regardless of the uniform she's wearing.

The study, conducted by the psychology lab at Oregon State University, gave girls ages 4 to 7 one of three dolls to play with: Barbie dressed as a fashion model (which was, in fact, her original incarnation), Barbie dressed as a doctor, or Mrs. Potato Head. Those who played with either of the Barbies later viewed themselves as having fewer career options than boys do, and espoused a preference for more "pink collar" jobs like teacher or flight attendant. Those who played with Mrs. Potato Head, on the other hand, were able to envision themselves in more varied — and less gendernormative — roles, like firefighter or pilot.

When drawing attention to these types of studies, the goal is not in any way to disparage traditionally feminine roles, which have long been undervalued and under-payed by a society that continues to place a premium on masculinity. Rather, this is about recognizing the limiting effect that playing with heavily gendered toys can have on children's ultimate ambitions. Of course little girls can — and absolutely should — dream of becoming teachers, librarians and nurses. But they also should know that they are not beholden to these careers by virtue of their gender any more than the boys are.

Mrs. Potato Head obviously isn't an accurate representation of the average female body type either (because, well... she's a potato), but apparently even a root vegetable with detachable facial features sends a better message to little girls than do Barbie's unrealistic curves.

It's important to note this trend isn't new. Barbie's figure has been a source of controversy for years. One recent study showed that girls who play with skinny dolls may eat less afterwards, and Sports Illustrated turned the kids' toy into a very adult sex object for its 50th anniversary Swimsuit Edition in February.

This really is a shame — as the former owner of at least 13 different Barbies, I can attest to the fact that playing with them can be a lot of fun. Companies are starting to discover the market for empowering toys, with dolls like the more realistically-proportioned Lammily potentially hitting shelves soon. But as long as Barbie maintains her sexualized silhouette, Mattel's efforts to pass her off as a role model may always fall flat.