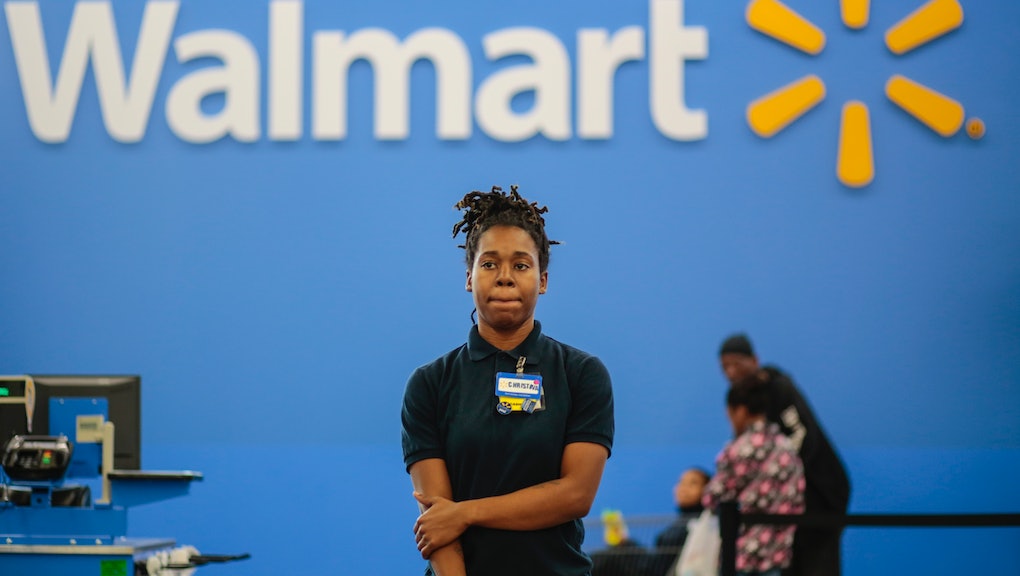 Walmart’s Wages Are So Low, You’re Actually Paying For Their Employees

The news: On Tuesday, Americans for Tax Fairness, a coalition of 400 national and state-level progressive groups, released an analysis that determined many Walmart employees' wages are so low that many of their basic living expenses end up being subsidized by the taxpayer. Employees at the mega-chain cost the country roughly $6.2 billion annually in public assistance such as SNAP (food stamps), Medicaid, subsidized housing and other benefits. For comparison, that figure's higher than the national GDP for more than 40 nations around the world. Using data provided by the Democratic Staff of the U.S. House Committee on Education and the Workforce in May 2013, the study determined the average Walmart Supercenter costs taxpayers between $904,542 and $1.75 million per year in supplemental assistance, or about $3,015-$5,815 for each of its 300 workers.

What's more, Citizens for Tax Justice estimate that Walmart saved around $5.1 billion in federal income taxes from 2008 to 2012 thanks to federal tax breaks and loopholes that enabled Walmart to pay around 29.1% instead of the statutory 35%. (The $41 million in lobbying Walmart spent between 2008 and 2013 might have something to do with this.)

And to top it off, the Walton family, which founded Walmart, are themselves estimated to have saved $607 million in federal taxes each year, according to that same Americans for Tax Fairness report, because their capital gain and dividend earnings are taxed at lower rates than standard income.

All told, Americans for Tax Fairness says that Walmart has cost the U.S. taxpayer about $7.8 billion a year. Plus, the company's own estimate that they receive 18% of all SNAP funds spent means another $13.5 billion flows directly from the United States government into their coffers.

Big business: Walmart is pretty huge, so it's not like they can't afford to pay workers more. The company posted 2013 U.S. sales of $274 billion. In 2012 profits were $17 billion. In November, CNN Money senior editor Stephen Gandel cracked the numbers and estimated that Walmart could give its employees (who on average make around $22,000) up to a 50% raise without tanking its stock. Additionally, earlier this month Slate calculated that the mega-chain could raises its wages from $8.81 and hour to a more livable $13.63 an hour and would only need a 1.4% price hike to cover their costs. Seems pretty doable for one of the world's largest corporations.

The company's meteoric rise can be seen below in a mesmerizing gif made by Daniel Ferry:

Walmart is far from the only corporation getting special treatment from the government when Tax Day rolls around. co.Exist's Ben Schiller found that 111 of Fortune 500 companies paid no taxes in the past five years, while some like Boeing, General Electric, Priceline.com and Verizon actually posted negative tax rates despite combined profits of $170 billion. Maybe Benjamin Franklin wasn't correct about that whole death and taxes thing.