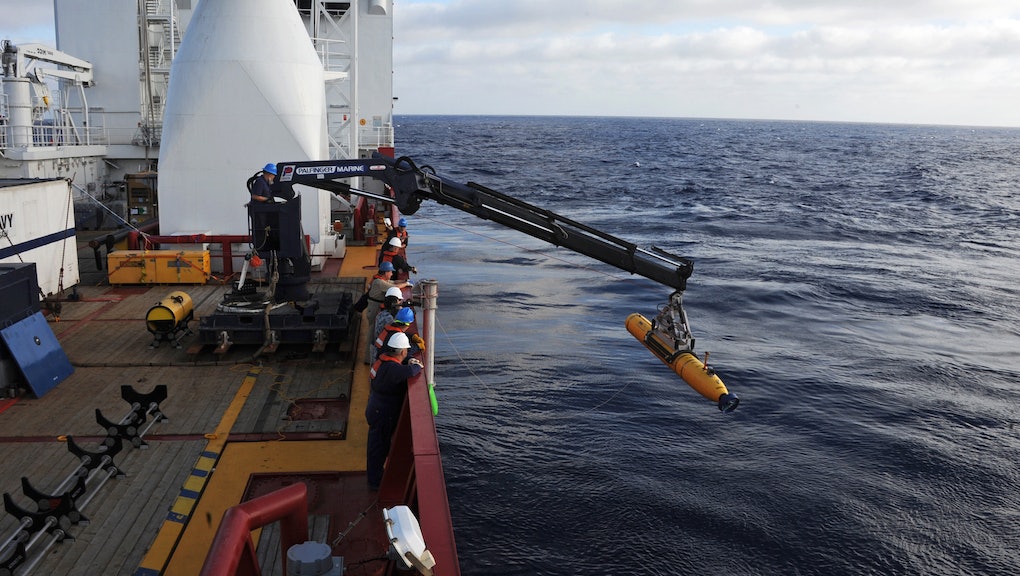 How in the World Did We Completely Lose an Airplane?

The news: This week, NASA announced a very exciting discovery of what may be the first planet, other than Earth, capable of sustaining life. Labelled Kepler-186f, the planet is believed to be made of rock, with similar size and gravity to Earth and the right temperature to have liquid water. If so, these conditions could be indicators of alien life, as well as a sign that there are many more inhabitable planets out in space.

But the genuine excitement of this discovery is ironically complicated by the fact that here on Earth, we are still struggling to look a mere three miles under the surface of our ocean. Even though we can observe a planet 490 light years outside our solar system, we have yet to find a sign of the missing Malaysia Airlines Flight 370. After over a month of fruitless searches by 26 countries, it's frustrating and confusing to not have found a single piece of the wreckage.

This all raises the question: How is it so impossibly difficult to dive down and find the plane?

The astronomic difficulties: The fact is, we simply don't have much experience with deep-sea exploration. As this incredible graphic from the Washington Post shows, the Malaysia plane is estimated to be three miles below the surface of the ocean — which is deeper than the maximum known depth of the deepest diving mammal, the Cuvier's beaked whale (9,816 ft), the depth of the wreck of the Titanic (12,500 ft) and the depth at which the flight data recorders from Air France Flight 447 were found (13,100 ft).

And keep in mind that it took two years to find the black boxes from that Air France plane.

Technology isn't on our side either. Most forms of modern communication — light, radio, X-rays, wi-fi — rely on electromagnetic radiation, which are basically useless in seawater. That leaves sonar, which is still not the most accurate method of measurement, especially this deep in the ocean.

Another huge problem is the sheer amount of debris in the ocean. There is so much junk in the water that it's affecting visibility and providing false leads in the investigation. Several times, satellite images have captured promising sightings of possible airplane debris, which have all turned out to be nothing more than ocean trash.

The best lead yet: Even so, investigators believe that they may be close to finding the plane. After a couple of failed attempts, the U.S. Navy's Bluefin-21 — an autonomous vehicle that moves at a walking pace — has been able to scour 68 square miles near the presumed crash site. On its latest mission, it was able to travel as far down as 15,404 feet.

Australian vessel Ocean Shield has also significantly sped up the operations. Last week, the ship used a "ping" detector to triangulate the electronic signals from the plane's black boxes — narrowing the search area from 18,000 square miles to 36 square miles.

Investigators are now hopeful that Bluefin-21 will turn up some concrete evidence. "We believe that search will be completed within a week or so. If we don't find wreckage, we stop, we regroup, we reconsider," said Australian prime minister Tony Abbott.