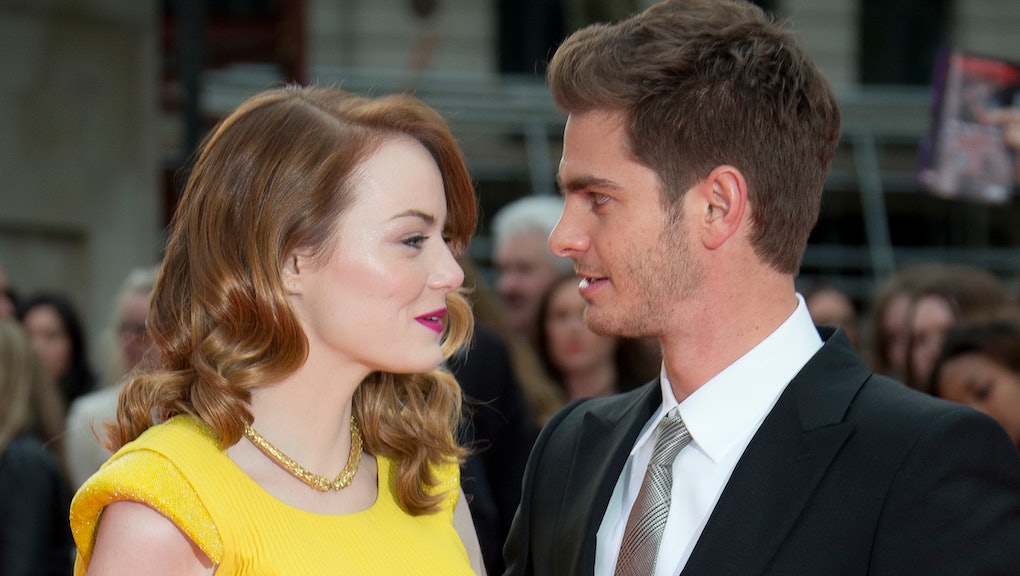 The Amazing Spider-Man 2 star Andrew Garfield stuck his foot firmly in his mouth at a recent Q&A when he (accidentally) mocked femininity in front of an audience of impressionable young kids. Luckily, Garfield's co-star and girlfriend Emma Stone was there to seamlessly call him out on the error, which he eventually corrected. Moral of this story? We all make mistakes sometimes, but it's important to speak up when we see others perpetuating stereotypes, even inadvertently.

The whole affair started earlier in April during a special event featuring Spidey co-stars Garfield, Stone and Jamie Foxx. During a Q&A portion, a boy asked Garfied where Spider-Man got his costume.

"He made it," Garfield replied. "He made it with his bare hands. He sewed it, he took some sewing classes and some needlework. It's kind of a feminine thing to do, he made a very masculine costume out of a very feminine [task]."

The message here, though subtle, is troubling: "Don't worry, kids. Spidey did a girly thing, but it was just to make a costume. He can still be a macho superhero!"

This gender-stereotyping did not escape Stone, however, who quickly pressed Garfield to explain: "It's feminine, how?"

The audience gasped, and Garfield was clearly taken aback. There's a smidgen of defensive mansplaining in his reply at first: "It's amazing how you took that as an insult." But Stone, who has called out media sexism in the past, just soldiered on with a smile, saying, "No, no, I'm not taking it as an insult. I'm asking how it's feminine."

With Stone amicably refusing to back down, Garfield tried to dig himself out of the hole. "It's feminine because I would say that femininity is about more delicacy and precision and detailed work and craftsmanship. Like my mother, she's an amazing craftsman," he said. "She in fact made my first Spider-Man costume when I was 3 so I use it as a compliment, not just in complimenting women but in men as well. We all have feminine in us, young men."

That final phrase sealed the deal. The issue here was never that Stone needed a primer on the value of a craft considered to be "feminine," but that Garfield tried to wring a tired laugh out of the image of Spider-Man, a male superhero, doing something girly. In explaining himself, he recognized that there's nothing inherently lesser or mock-able about a feminine act like needlework, and that both boys and girls have the capacity for "feminine" skills.

What started as a silly comment turned into a pretty awesome teachable moment, which is honestly the best outcome one could hope for in any interaction about sexism.