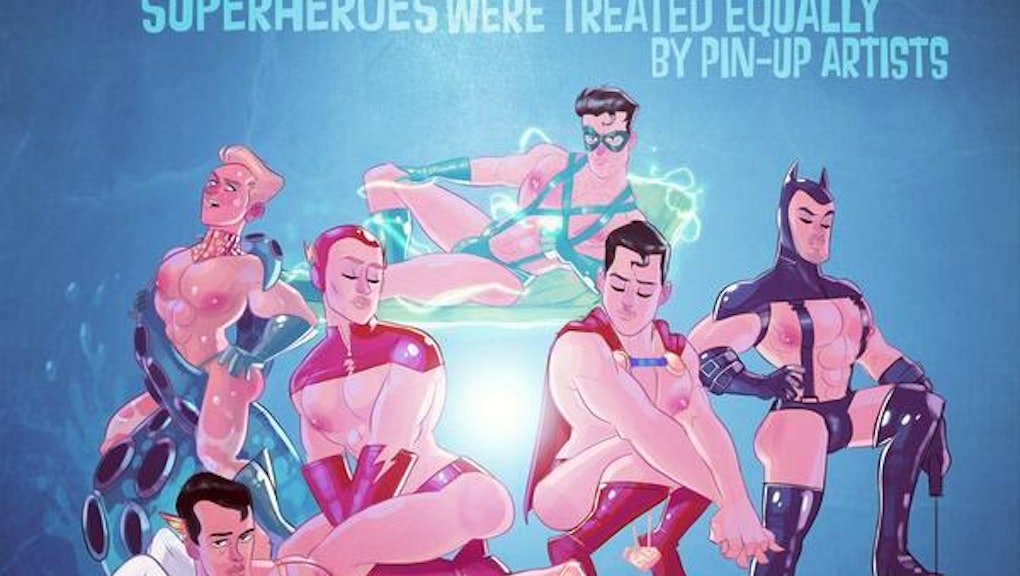 What if Batman was a pin-up model?

In hilarious (and ultimately thought-provoking) fashion, illustrator Stephen Byrne sets out to answer that question with his gender-bending re-imagining of such superhero standards.

While at first look the images might seem a little ridiculous, one would be wise to remember how much skin super heroines typically expose. Check out Halle Berry's Catwoman, for example, or this rather revealing Wonder Woman costume. Indeed, Byrne's gender-swapping is a powerful way to demonstrate gender stereotypes.

This technique has also been used skillfully for many different genres. For example, artist Sakimi Chan playfully replaces female Disney characters with their male counterparts in a way that reminds viewers of the heteronormative, sexualized nature of women in Disney films.

But particularly in the hypersexualized world of comics has been in some ways even slower than other genres to give women equal footing. This trend can be seen clearly in Hollywood's representation of female superheroes. Why is it that Black Widow, for all her bad-assness, doesn't have her own superpower?

To this end, The Hawkeye Initiative's side-by-side comparison of superheroines and their male, similarly sexualized versions deffectively showcase these failings. Check out the Neverland Hook's male version with its bikini top and bare ass for a great example of the way these images play with gender and beauty standards.

So far, Byrd seems to be getting a lot of positive reviews on his sultry superheroes, which has brought up some interesting points about male sexuality. In a dispiriting example of why society needs to keep talking about these issues, however, one commenter noted the comic "made me throw up in my mouth lmfao." Classy.