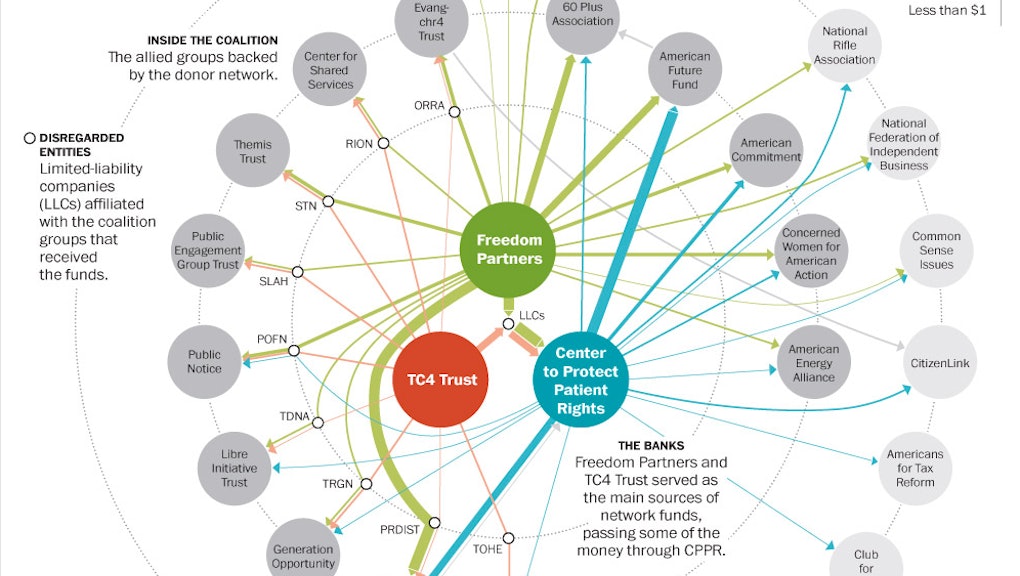 Here's How Dangerous the Koch Brothers Really Are, By the Numbers

By now, you've probably heard about Charles G. and David H. Koch, the incredibly wealthy libertarians at the helm of Koch Industries. Their combined net worth recently soared beyond $100 billion. And using that wealth, they've built a massive network of political donors designed to push a libertarian agenda that has become a flashpoint in the buildup to the 2014 midterm elections, with Senate Majority Leader Harry Reid (D-Nev.) even making the brothers a major Democratic talking point.

But just how far does the Koch Brothers' web of spending go? Unfortunately, much of their spending does not have to be federally disclosed, so it's difficult to know where the money comes from or to track its ultimate destination. What outside analysts have been able to piece together is nearly incomprehensible, a complex web of limited-liability companies and nonprofits seemingly designed to shuttle money and obfuscate external monitoring. The Washington Post put this infographic together showing the Koch's 2012 web:

This funding network is confusing by design. It's since grown even larger over time, but here's what it looked like in 2008, courtesy of Muckety:

And grown this monster has. An analysis of tax returns and other documents conducted by the Washington Post found that the network of politically active nonprofits backed by the Koch brothers and other donors raised an astonishing $407 million in 2012 to defeat President Obama. That's just short of what the Romney campaign, excluding RNC and outside group spending, was able to spend.

It's hard to visualize the scope of the network they've built — it matches the $400 million or so unions poured into national, state, and local elections in 2012, and dwarfs the $100 million from wealthy liberal donors raised through a group called Democracy Alliance. And it beat out establishment conservatives' best efforts like Karl Rove's Crossroads, which took in $325 million.

Even just the spending that comes directly from the Kochs themselves and not their larger network is felt across the nation:

All of this funding is just what they spent on the 2012 elections. Koch dollars also flood to everything from think tanks (most prominently the Cato Institute, which they founded in 1977, the Heritage Institution, and the Reason Foundation) to climate change denial.

From 1997 to 2010, Greenpeace estimates groups involved in climate change denial got over $61.375 million from the brothers' network. In 2008, when then-candidate Obama described climate change as "beyond dispute," the Cato Institute took out a full-page ad in the Times to issue a rebuttal. In 2010, the Kochs and their employees gave over $300,000 to members of the House Energy and Commerce Commitee debating the Keystone XL pipeline, making them the oil and gas industry's biggest donors to that body.

And there's a real, meaningful difference between those other groups and the Koch network. For one, they outpace the left's biggest donors by a very large margin. Here's how Mother Jones charted their spending compared to conservative boogeyman George Soros in 2012:

But the way in which they co-ordinate their network of donations is also very different.

"It is a very sophisticated and complicated structure,"University of Notre Dame Law School professor Lloyd Hitoshi Mayer told the Washington Post. "It's designed to make it opaque as to where the money is coming from and where the money is going. No layperson thought this up. It would only be worth it if you were spending the kind of dollars the Koch brothers are, because this was not cheap."

Still, that money wasn't enough to kill Obama's presidency in 2012. But they're not about to give up — not with basically unlimited financial reserves and an increasingly lax campaign finance system to give them and other large donors more leeway. "We raised a lot of money and mobilized an awful lot of people, and we lost, plain and simple," David Koch told Forbes. "We're going to study what worked, what didn’t work, and improve our efforts in the future. We're not going to roll over and play dead."

And they're already trying out new methods for the 2014 midterm elections. Freedom Partners, a conservative political group sometimes referred to as the billionaire Koch brothers' "private bank," has gone on the attack against Democrats in the Iowa and Colorado Senate races. The two ads, which cost a combined $1.1 million to air, go after Colorado Democratic Sen. Mark Udall and Iowa Rep. Bruce Braley (the presumptive Democratic candidate for Senate) for supporting Obamacare while simultaneously taking dirty insurance company money.

As seen in the charts above, Freedom Partners (FP) is one of the key central components of the Koch fundraising system. In the year after it was founded in November 2011 alone, FP raised $256 million and paid out $236 million. Slapping its own name on the ads is a big change for the group, which has previously been content to just give the money to the other Koch affiliates like Americans for Prosperity (which spent about $122 million in TV spots in 2012 and is preparing to spend another $30 million this year).

... Freedom Partners is bringing in-house many of the functions it financed through other groups in the last campaign. The organization's elevated role speaks to how the Kochs are exerting more control over the political activity they fund, a strategy that provides more accountability to fellow conservative donors who want to know how their money is being spent.

The Chicago Tribune also notes that Freedom Partners is planning to take a "more direct" approach this year, and by all indications, that doesn't sound like a good thing for democracy. Secret spending is no joy for democracy, but openly pouring cash into the nation's political system doesn't seem much better either. And it may just indicate our standards have dropped so low that no one cares much anymore.

The Koch's secretive right-wing fundraising network is cutting out the middlemen and stepping up their attack with more directed and aggressive messaging. The shadowy middlemen have been deemed an unnecessary inefficiency and the Kochs are practically doing the job themselves. Why bother even hiding the money anymore? And why even call it "dark" money anymore? The money's there and it's being spent however the Kochs want.