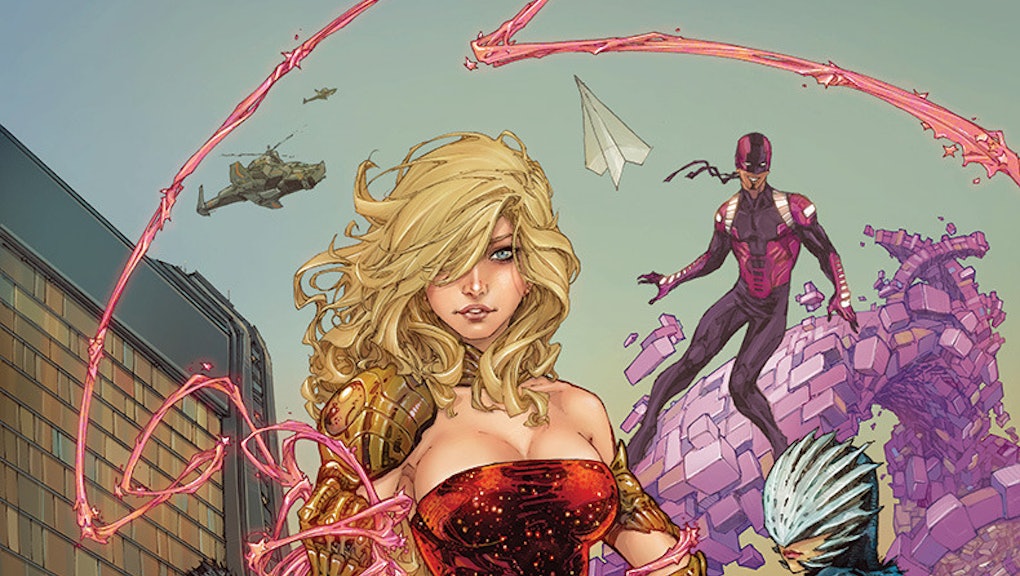 Rape Threats Are Not the Way to Defend Comic Book Misogyny

The comic book industry has always been criticized being dominated by men. However, the recent abuse directed at writer Janelle Asselin for her critique of a sexist Teen Titans cover proves that the pervasive misogyny is now completely out of hand.

Asselin, a former DC Comics editor of Batman, wrote a critique of the cover for the brand-new Teen Titans comic series. The cover portrays a teen heroine front and center, breasts bulging out of her skintight catsuit, waist impossibly small — the cartoon ideal of a male fantasy in teenage form. Asselin writes, "The worst part of the image, by far, are her breasts. The problem is not that she's a teen girl with large breasts, because those certainly exist. The main problem is that this is not the natural chest of a large-breasted woman. Those are implants. On a teenaged superheroine."

Though the gender aspect was only one element of her critique, Asselin was shredded for it. Comic fans took to Twitter, message boards and even a survey run by Asselin to sexually harass her and tear apart her perspective. The most disturbing element of the insults was that many of them were rape threats.

Asselin wrote in a follow-up on her blog, "I was called a whiny bitch, a feminazi, a feminist bitch, a bitter cunt and then the rape threats started rolling in."

In a sick and ironic way, the backlash to Asselin's argument about institutionalized sexism in comics is entirely proven by the type of backlash she received. She wasn't hit with debate or even death threats — the fact that they were rape threats proves her point and says a great deal about what's considered normal within the comic context.

As Asselin writes, "If you really want to 'get me' and prove that sexual harassment doesn't exist in comics, I don't know, maybe it's better for you to answer honestly about how you haven't been sexually harassed. Because certainly sending me rape threats proves my point, not yours."

On online spaces, women are often treated to similar threats, particularly when the focus of the content is "geeky" in nature. The fact that this continues to happen, and is even expected, is a type of status quo that we really can't be tolerating. As Tauriq Moosa at the Daily Beast writes, "A powerful reason some men feel no hesitation when sending horrible messages to women is they believe they're operating within a space that accepts it as the norm."

It is our responsibility to highlight these moments and prove that this is not, and should not, be the norm. Women like Asselin should be able to freely express their opinion and perspective without the threat of rape ever factoring into the equation. In fact, women like Asselin are crucial as they're working hard to make the industry feel both accessible, fair and safe to female comic fans.

As for the sexist Teen Titans cover? It deserved to be called out — or at the very least it deserved a fair discussion. It underscores a pervasive issue in the industry, which is a medium where female characters are often seen through the lens of looks and not through the lens of power. In fact, female superheros often don't even have powers. If a woman in the industry is working to lessen this misogynistic culture, threatening her on the basis of gender, threatening her with rape, is a horrible way to perfectly prove her point.

Corrected 4/24/14: An earlier version of this article stated Janelle Asselin was an editor of Newsarama. She is no longer an editor of this website.