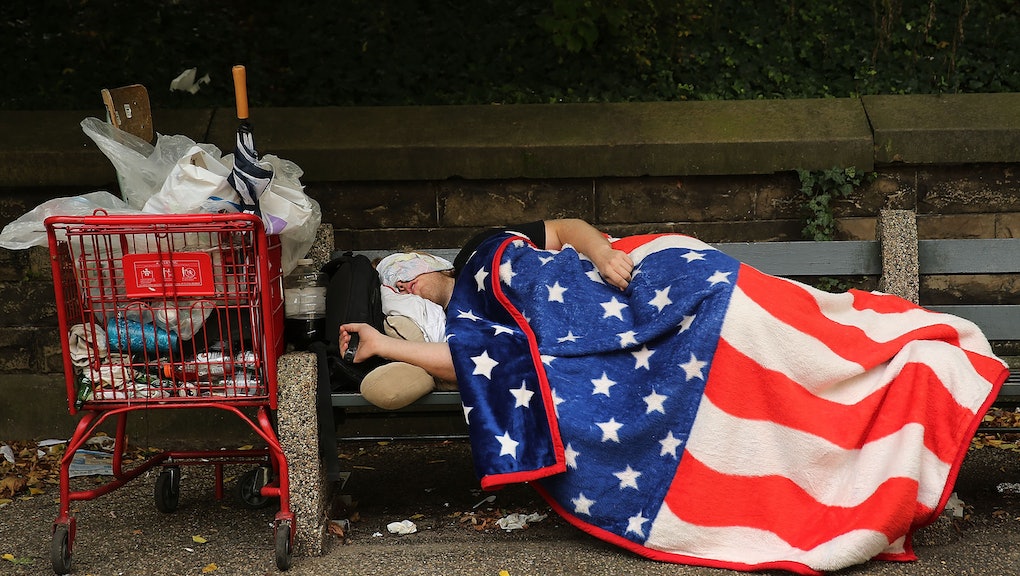 The news: Fort Lauderdale, Fla., is on the way to approving an ordinance that would allow the city to seize homeless people's possessions and lock them up after 24 hours notice, essentially attempting to drive out the city's destitute by putting them under threat of losing their stuff. Under the proposed legislation, police officers would be empowered to take any items stored on public property, and the homeless would be forced to pay "reasonable charges for storage and removal of the items" to the city to retrieve their property. Although the fee is waived if the person can demonstrate an inability to pay, Fort Lauderdale would destroy any possessions not claimed within 30 days.

The city commission gave the measure unanimous preliminary approval, despite what ThinkProgress calls "overwhelming opposition from local residents." One woman said that it was "insanity that we are even here discussing whether an individual can put on the ground the few objects that they own." Maria Foscarinis, the executive director of the National Law Center on Homelessness & Poverty, said that "simply punishing homeless people for leaving their possessions in public places is not an effective or humane way to address" the challenge of cleaning up city streets.

The commission is also considering other inititatives aimed at the homeless, like harsher penalties for going to the bathroom in public, prohibitions on panhandling and even restricting charity groups from feeding the homeless.

Fort Lauderdale and beyond: Fort Lauderdale's initiatives aren't happening in a vacuum. Florida is consistently ranked as one of, if not the, most dangerous states to be homeless, with the National Coalition for the Homeless citing severe anti-camping, panhandling and food-sharing laws. Florida and California cities were directly accused of sending the message that homeless people "do not matter and are not worthy of living in our city." Officials in Sarasota, which has a severe lack of services for the homeless, are fighting viciously over where to place a new shelter. A "camping" ordinance in Pensacola proposed to criminalize sleeping outdoors "adjacent to or inside a tent or sleeping bag, or atop and/or covered by materials such as a bedroll, cardboard, newspapers or inside some form of temporary shelter." In Tampa the city council passed a bill allowing police to jail people for sleeping or storing their stuff in public, plus others banning panhandling.

There are humane alternatives. It actually costs less to build and maintain decent housing for the homeless than it does to leave them on the street, where they're much more likely to develop costly medical problems and use emergency medical resources than receive the care they need. Such an approach to dealing with homelessness also lowers the cost of devoting police resources to the problem, because when homeless people have decent homes and their everyday behavior isn't criminalized, they don't end up in jail. As PolicyMic reported in March:

University of North Carolina at Charlotte researchers released a study on Monday that tracked chronically homeless adults housed in the Moore Place facility run by Charlotte's Urban Ministry Center (UMC) in partnership with local government. Housing these people led to dramatic cost savings that more than paid for the cost of putting them in decent housing, including $1.8 million in health care savings from 447 fewer ER visits (78% reduction) and 372 fewer hospital days (79% reduction). Tenants also spent 84 fewer days in jail, with a 72% drop in arrests.Moore Place cost $6 million in land and construction costs, and tenants are required to contribute 30% of their income (mainly benefits) towards rent. The remainder of the $14,000 per tenant annually is covered by donations and local and federal funding. According to the UNCC study, that $14,000 pales in comparison to the costs a chronically homeless person racks up every year to society — a stunning $39,458 in combined medical, judicial and other costs.

Homeless people are still people, and it's not right to sweep them (or their possessions) under the rug. But in Florida, it's not really looking like any cities will adopt any beneficial policies that could actually reduce or end homelessness. Instead, they will continue an approach driven by police and force.