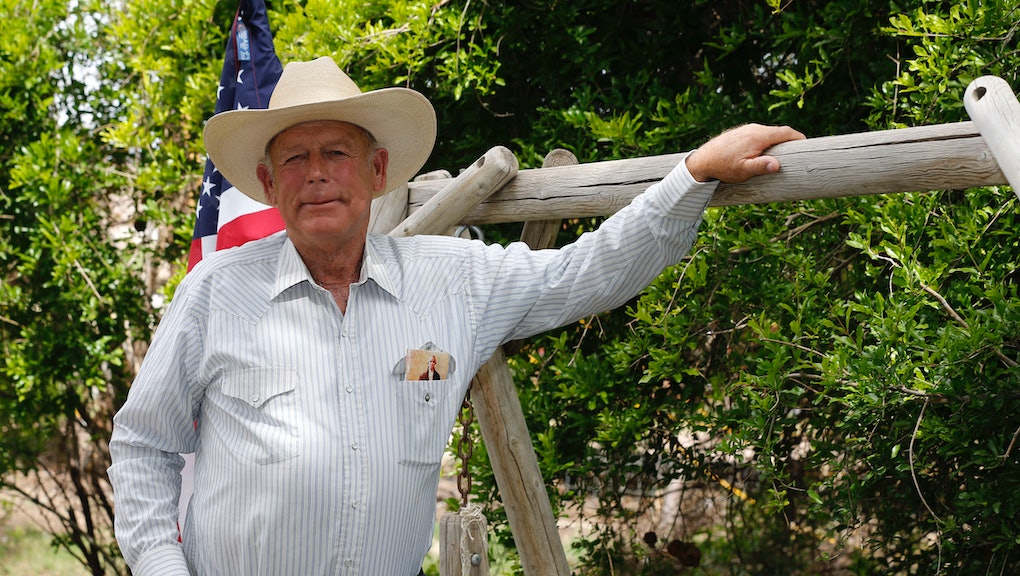 The 58-year-old Nevada rancher is losing supporters by the boatload over some objectionable comments he made to the New York Times yesterday. That's putting it kindly, since really his statements were nothing short of horrific, ignorant, more than a tad racist and, perhaps worst of all, rather unsurprising. Here's an excerpt:

"I want to tell you one more thing I know about the Negro," he began. (Already, there's no way this ends well.)

"And because they were basically on government subsidy, so now what do they do? [...] They abort their young children, they put their young men in jail, because they never learned how to pick cotton. And I've often wondered, are they better off as slaves, picking cotton and having a family life and doing things, or are they better off under government subsidy? They didn't get no more freedom. They got less freedom."

Wow. For context, this is a man who owes the U.S. government $1 million in retroactive cattle-grazing fees from feeding his livestock on federal lands since 1993 without paying a cent.

Earlier this month, his circumstances escalated into some John Ford shit when law enforcement officials tried seizing his animals and Bundy showed up with a crew of armed supporters to protest. The feds deemed the situation so volatile they withdrew. Ever since, Bundy's been hailed as a "hero" and "patriot" by various right-wingers, libertarians and FOX News pundits.

But once his (let's call them) controversial views about black people and slavery came to light, Team Bundy got very thin very quickly. Rand Paul (R-Ky.), a staunch former defender, has since come out and "wholeheartedly [disagreed]" with the rancher's "offensive" comments, while Sen. Dean Heller (R-Nev.) "condemns [Bundy's statement] in the most strenuous way." A slew of others have also started jumping ship, which is bad news for the 58-year-old. Having powerful friends was probably his best chance of avoiding a bullet-ridden demise at the hands of federal law enforcement, and now that's up in smoke.

Whether these politicians and pundits stay at arm's length for the long run remains to be seen. Because when has blatant bigotry ever really stopped them from supporting each other before?

It almost seems redundant to call Bundy a "racist" — it's too easy, and feels a bit like a convenient "you think I'm racist? Look at this guy"-type distraction from the less blatant racism that informs our everyday lives. Instead, let's use a simpler term: "Idiot."

Bundy's assumption that black people would be better off as slaves because at least they'd be "picking cotton and having a family life" instead of lazing on the front porches of their broken homes betrays a stunning ignorance of what American slavery actually was. It wasn't just forced labor, which would've been bad enough. As Ta-Nehisi Coates points out in the Atlantic, slavery was also a massive apparatus of physical and psychological torture, one of the most thoroughly dehumanizing institutions imaginable. So far as "having a family life" was concerned, the rancher gets bonus points for stupidity there. A defining practice of slavery was the routine tearing apart of black families and selling their members to different "owners."

If Bundy thinks this is preferable to pretty much anything whatsoever, I'd suggest he try experiencing it himself. Otherwise, maybe stick to what you know. And in his case, that's screwing the government out of tons of money.