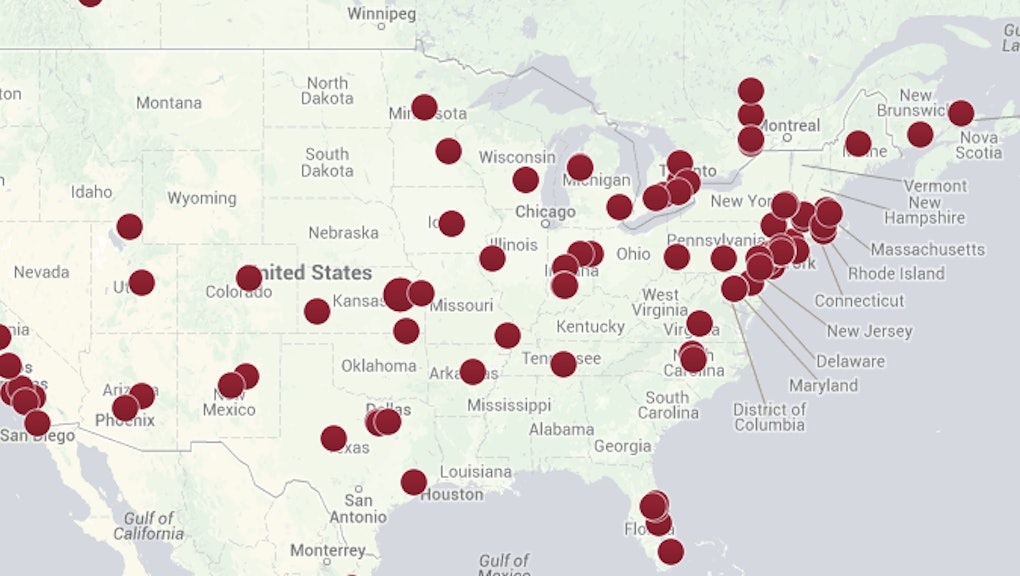 A Disease Considered Eradicated in 2000 Is Now Sweeping the Country

The news: Today in America, measles is not a disease that most people worry about. Since the vaccine was first introduced in 1963, reported cases of measles dropped by 99%. But now, 50 years later, the once-eradicated disease is making a comeback — thanks to the anti-vaccine movement.

In the first four months of 2014, measles has already infected 129 people in 13 states — compared to 189 cases from all of 2013. According to the Centers for Disease Control and Prevention, that's the highest four-month measles count since 1996 — and that's not even the most worrying part.

Until just a month ago, outbreaks had only been reported in New York, Boston, Philadelphia, San Francisco and Los Angeles; now, measles is crossing state lines to spread across the country. California has been hit the hardest, with 58 reported cases of measles. New York has 24, followed by Washington with 13.

Here is how the disease is spreading: Travel is a big factor — 34 of the patients were infected abroad, with 17 contracting the disease in the Philippines.

But the CDC and other doctors say the reason the outbreak has been so huge is because of people who refused vaccinations. "As more parents decline to vaccinate their children, measles incidence is increasing — a fact that alarms me both as a hospital epidemiologist and as a parent of a vulnerable infant too young to receive the measles vaccine," wrote epidemiologist Julia Shaklee Sammons in the Annals of Internal Medicine.

Thanks to declining rates of vaccination, measles and other preventable diseases — which were essentially eradicated decades ago — are now making a comeback.

Why is vaccination so important? It's important to keep in mind that no vaccine is 100% effective. In the case of the measles vaccine, the two-dose regimen creates immunity in 95% of people. But there is always risk of primary failure, which is when the vaccine fails to produce antibodies, or secondary failure, which is when an inoculated person loses immunity later in life.

Still, vaccination is a crucial component of maintaining "herd immunity": if the majority of a population is inoculated, it can stop chains of infection. Even if your body doesn't have 100% immunity against a disease, if others around you are immunized, you are less likely to contract the disease.

And California's 58 measles patients demonstrate why vaccination is so crucial: 43 of them had not been vaccinated, and the vast majority contracted the disease abroad. Though some had legitimate reasons for not being immunized — three were too young to receive shots — others refused due to religious or philosophical reasons.

How dangerous is measles? It is a respiratory virus that causes rashes all over the body. Though it is a painful condition, it is rarely deadly: only one or two cases out of 1,000 turn out to be fatal. But in the Philippines, where upwards of 20,000 have been infected, the outbreak has already claimed 69 lives.

"We really don't want a child to die from measles, but it's almost inevitable," said Anne Schuchat, CDC's immunization director. "Major resurgences of diseases can sneak up on us."

There's also the risk of bringing an infected person to emergency services, where the virus can spread to other patients. It's especially dangerous in pediatric care, where children without the appropriate antibodies can contract the disease from others. Though some parents might not like the idea of putting vaccines into their children's bodies, their refusal to do so can put other children at risk.