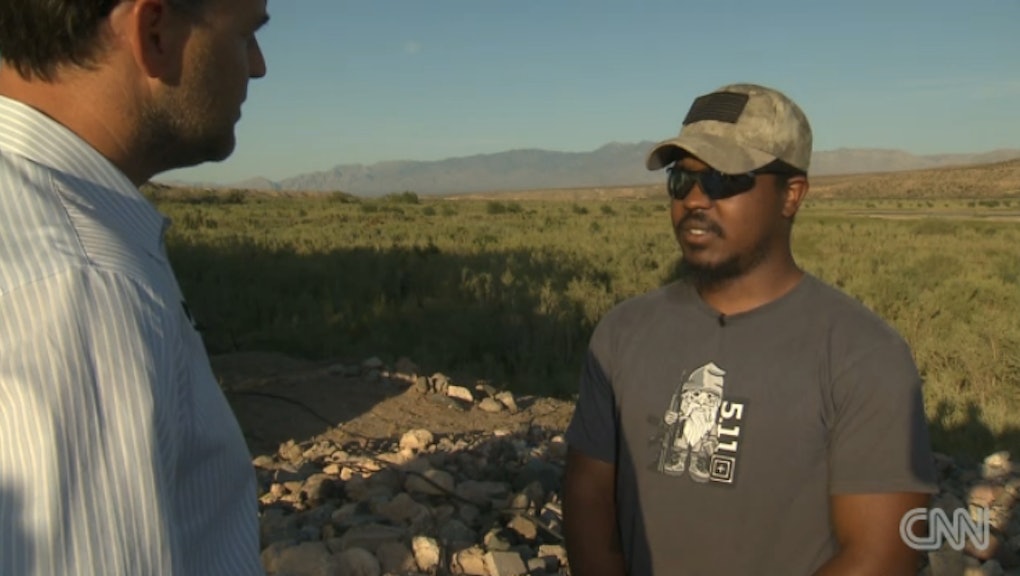 "I would take a bullet for that man if need be," six-year U.S. Army veteran Jason Bullock said of the man he serves as a bodyguard, Nevada rancher Cliven Bundy. "I look up to him just like I do my own grandfather. I believe in his cause and after having met Mr. Bundy a few times, I have a really good feel about him and I'm a pretty good judge of character."

By now, pretty much everyone paying attention to the news has heard of Cliven Bundy, a Nevada rancher locked in a tussle with the feds in Bunkerville, Nev. about 80 miles northeast of Las Vegas. Bundy's battle over grazing rights on public land culminated in a small militia of heavily armed locals coming to his defense, scaring federal officials away from a massive cattle-roundup operation. But Bundy scared off all but his most ardent supporters in a recent interview when he suggested black people were better off as slaves (and more recently, said that if people were offended by his racism, then MLK didn't do his job).

And in yet another turn of the bizarre Bundy saga, Bullock — the man who says he'll lay down his life for Bundy if need be — happens to be black.

"Mr. Bundy is not a racist," he told CNN. "Ever since I've been here, he's treated me with nothing but hospitality. He's pretty much treating me just like his own family."

Okay, so this doesn't fit neatly into the "Cliven Bundy is a racist" narrative. But before Bundy's anti-government supporters jump over Bullock's remarks to demonstrate that the rancher loves people of all races equally, we should take his words with a grain of salt. By his own admission, Bullock has only met Bundy a few times (Bullock is one of several of Bundy's "bodyguards," hanging around the ranch in recent weeks). No matter how earnest Bullock's views are, he's likely being paid a fair penny to protect his employer (and rightfully so, given that he could potentially be defending Bundy against the feds).

But wait, there's more: After the initial backlash against Bullock's comments, CNN brought him on the air once again to try to explain himself and his stance on Bundy and his supposed racism. It doesn't exactly go perfectly.

Bollocks on Bullock: And whether or not Bundy has the support of a small number of people of color doesn't excuse his remarks, which were incredibly offensive to the point that virtually all of his mainstream support evaporated overnight. Gun rights advocates have even expressed worry that the militamen who turned out to support Bundy will be cast as white supremacists.

But you can at least respect Bullock for sticking to his guns. The truth is, now that Bundy's let loose, it's probably more telling to examine who supported him before he outed himself as a jerk than those who are sticking with him through thick and thin. That list is a long series of conservative media commentators and politicians who should have known better — not necessarily because their ideologies conflict, but because a man willing to bear arms against the federal government is clearly one who's also a political loose cannon. Essentially, they put cashing in on anti-government resentment ahead of common sense. The Wire singled out a few for us:

Texas Attorney General Greg Abbott (R), who used the Bundy ordeal to call attention to similar battles in his own state then distanced himself.

Sen. Ted Cruz (R-Texas), who seemed to think that this would end up like Waco and bemoaned the "unfortunate and tragic culmination of the path that President Obama has set the federal government on," and now thinks Bundy's remarks are "completely unacceptable."

To which we can add a few, like FOX News' Bill O'Reilly, Judge Napolitano (who called Bundy "a patriot and hero" at the "vortex of this anti-government movement") and Sean Hannity, who might be the only one who isn't backing down. Support for Bundy could come back to haunt any of these people down the road.

The Bundy affair isn't the neat little bundle those on either the left or right would like it to be. And to be clear, it wouldn't be fair to accuse any of the commenting politicians or talking heads of necessarily having the same beliefs as Bundy. But now that the ship is sinking, we can really see who was just tagging along for the free ride and now jumping ship and who's willing to see it out to the bitter end.