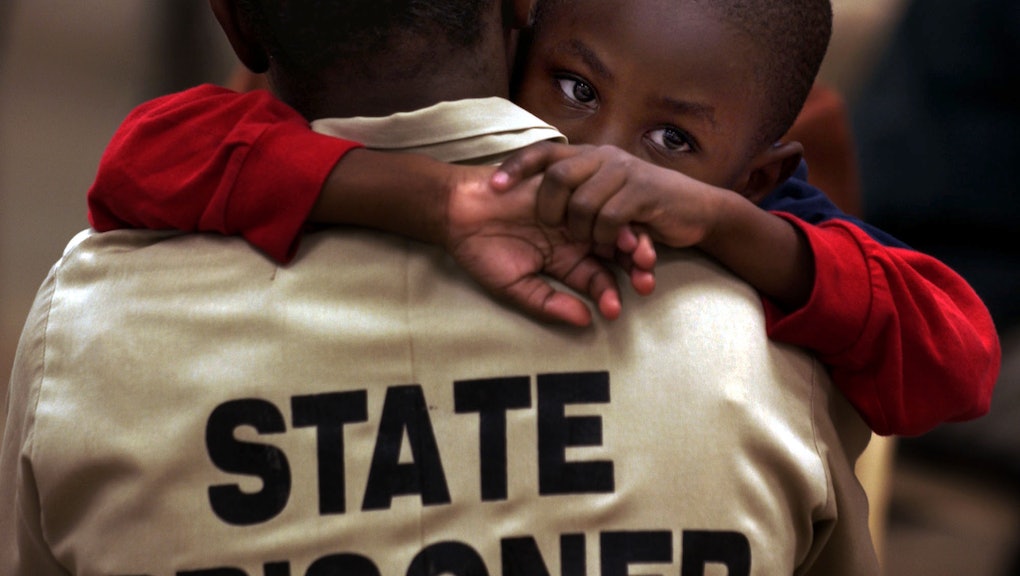 "Women are not just small men," Stacy Burnett said. But they're treated like it in prison.

"The indoctrination begins the minute we put on our clothes," Burnett said. The pants will be too tight in the hips or bust, too loose in the waist or just generally way too big. They're not clothes made for a woman; they're small men's clothes, Burnett, 39, explained in a phone interview.

There's an overarching problem with how women are handled behind bars: They're hardly treated like women at all.

The United States incarcerates more women than any other country in the world. In recent years the number of women in prison has grown at nearly twice the rate of men. Between 1980 and 2010, the rate increased by 646%, rising from 15,000 to nearly 113,000, according to The Sentencing Project. Including jail populations, more than 200,000 women are now incarcerated and more than 1 million are under criminal justice supervision.

Stacy Burnett's story raises a few crucial points about women in prison. She had a good deal of money following various property sales and professional successes in writing. She decided to help her brother on a joint business venture and in August 2007, she began signing checks for him to fill out. Without her knowledge, he depleted her accounts and wrote dozens of bad checks. Once the checks started to bounce, Burnett was arrested for grand larceny and scheme to defraud. She was sentenced to prison on April 20, 2009, and not released until July 2013. She served the majority of her time in Albion, a medium-security prison for women in Orleans County, N.Y.

Firstly, her case is a reminder that women often end up in prison for very different reasons than men do. The majority of women are locked up for drug and property offenses, while the majority of men go to prison for violent offenses; only about 36% of female offenders go to prison for violent crimes, whereas 54% of men do. Also, Burnett noted that many women she served time with were paying for crimes of their men, such as driving a car that they didn't know had drugs in the trunk. "It's really heartbreaking. … I can't tell you how many times I saw that," she said.

One important difference between male and female prison populations is mental health: Women suffer from mental illness at a significantly higher rate. According to the U.S. Bureau of Justice Statistics, 73% of female inmates in state prisons had a mental health problem — "a staggering proportion," the ACLU wrote — while 55% of men did.

Burnett did not sign those checks in a balanced state of mind. She has bipolar disorder, which entails a constant cycle of manic episodes followed by bouts of deep depression. She had signed the checks in a manic state. When she arrived in prison, her illness was not properly treated. They gave her Prozac, which is not the correct medication and only made her aggressive. Burnett asked, "If this is the Department of Corrections, what are you correcting if you're not even addressing the problem?" In the general population, about 5% of women are affected by serious mental illness. "There's a direct causation here that really isn't being addressed," Burnett said.

Nicole Smolter, assistant professor at the School of Criminal Justice and Criminalistics at California State University, told PolicyMic that there is a disconnect between the mental health needs of prisoners and how they are treated. There's a "huge mental health need, and in that kind of environment, the solution is typically to use force," she said. But the "military-style approach," such as yelling, "doesn't connect with people who are in an emotionally vulnerable place." She added that almost 80% of women in prison have experienced physical, emotional or sexual abuse, usually in combination. That history of abuse is not taken into consideration in programming, which varies based on prison, but typically involves education (usually for GEDs), employment skills, vocational training and jobs within the facility.

The needs are not just psychological. Physically, women have significantly different needs from men, needs that are barely met behind bars. Something seemingly minor, like toilet paper allotment, can actually become a contentious problem. Keri Blakinger, 29, who served more than two years for heroin possession, said that women are given five rolls per month, the same amount that men get. "I used newspaper and notebook paper to get by," she said, adding that some women used their towels. "There were always problems with people stealing toilet paper if you forgot to lock up your locker before leaving your cell."

For menstruation, women are allotted an insufficient number of maxi pads (not tampons) each month. If you use them up, then "tough shit," Blakinger said. "If you have money, you can buy more on commissary. ... But you can only go to commissary every two weeks, which can be a problem if you have any unexpected bleeding."

According to the Bureau of Justice Statistics, about 4% of women admitted to prison are pregnant. That results in thousands of babies born in the correctional system each year. But as far as what to do with these babies, the U.S. lacks any national policy. The majority of children born behind bars are immediately separated from their mothers, Smolter said.

According to Burnett, who had a young son when she was sentenced, prenatal and postnatal care was inadequate for the pregnant women. It wasn't necessarily lack of medical care, she said. "They felt really rushed that they had to get back to the prison. … None of the women I knew who delivered were able to stay in the nursery. So the only time they had with their baby was in the hospital." There was "a lot of dissatisfaction with the way guards deal with the baby," she said, explaining that they were extremely impatient.

Shackling pregnant prisoners and those in labor is dangerous to the mother and the baby. Disturbingly, only 19 states outlaw or restrict it.

Nearly three-quarters of women in prison are mothers, and 70% were the primary caretakers in their households before incarceration, as Burnett was. Smolter said that about 11% of children end up in foster care and, if the mother has served time, it can be very challenging to get them back. The Correctional Association of New York writes that women receive "little aid in maintaining relationships with — and sometimes protecting parental rights to — their children." Burnett has not seen her son Timothy since January 2011. He first went into foster care, but she is fortunate that Timothy's father was able to obtain custody. However, she said, "Most women who do the kind of time I did lose their kids. They don't even know where their kids are."

Smolter noted that the woman's family members who care for the children often grow resentful. They have the mentality that the woman is "not fulfilling [her] role as a mother and as a caretaker," Smolter said. "We don't really see the same thing with men." Expectations for mothers are "much, much higher than they are for men." To compound the resentment, she added, "One of the biggest problems, especially for women, is that in many states, there may only be one facility." So families may have to drive hours to see them, and then drive for hours back home.

The ACLU writes, "As the number of incarcerated women climbs at an alarming pace, women and their families and their communities are increasingly affected by what happens behind bars." Even a quick glance at some of these issues suggests that programming in women's prisons direly needs to be reevaluated. Smolter said that "the basic humanity aspect of it" is missing. There is too much emphasis and value placed on technical achievements, such as earning a GED or learning a skill while incarcerated. But the root causes of problems have not been accounted for. "When [the women] come out, there's really been no treatment or addressing of those emotional issues," Smolter said.

Burnett said that at Albion, balconies from the Orleans men's facility overlooked the women's yard. The men would shout awful things, such as "Show me your tits," or "I can smell that pussy," she said. If the women ever shouted back, they'd get in trouble. "They can say whatever they want to us, and we have to take it," Burnett said. The whole attitude was "just suck it up. … They want us to be passive."

"It's a man who arrests us, a man who drives the bus to take us to the frickin' facility. There really isn't any input from women through this whole process. Men put us in prison and keep us in prison."

"I really would end with a question," she said. "Where are the feminists?"