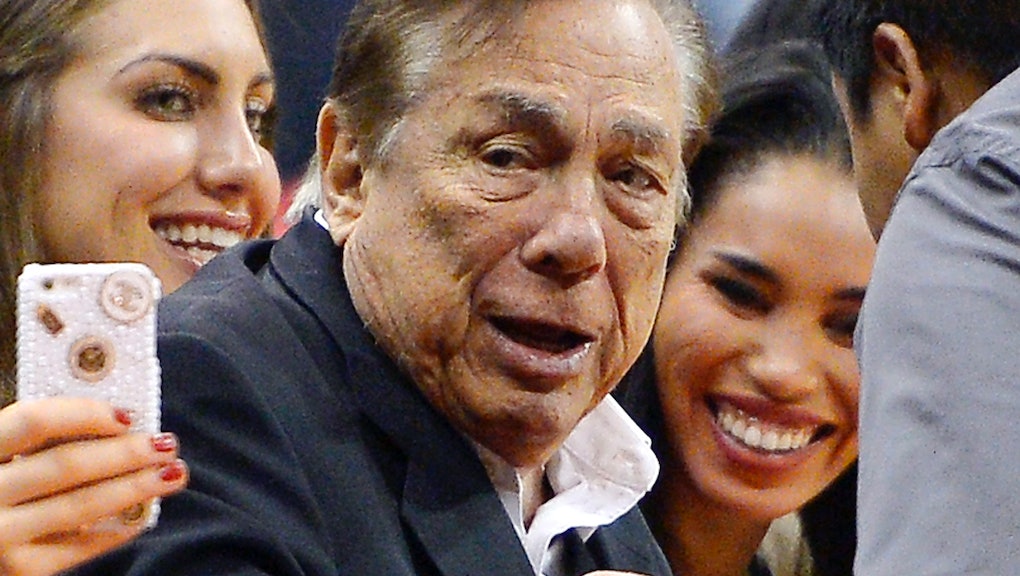 Since getting pummeled in the 2012 election among voters of color, the Republican Party has attempted to rebrand itself. With workshops on how to talk to women and CPAC sessions on minority outreach, the Grand Old Party is clearly hoping it can right the ship in time for the next major election cycle.

But recent events like the outrageously brazen racism of billionaire Republican Donald Sterling suggest that the party still hasn't found its way out of the political wilderness. Sterling isn't a politician, but he is highly-visible and very rich, making him a figure with influence. The mogul's money is also probably one of the reasons his bigotry was eventually revealed. Either way, Sterling is the worst racist this week, but as we've seen countless times over the past year, he has many like-minded brothers — mostly Republicans — and this critical mass doesn't appear to be going away any time soon. Even more troubling for young people and minorities, the GOP may not actually be trying that hard to eradicate these elements.

The trouble began this past weekend, when TMZ published an audio tape of Los Angeles Clippers owner Donald Sterling ranting about his deep disdain for black people. Sterling, a registered Republican, told a female friend not to bring black people to Clippers' games on the recording, including NBA legends like Magic Johnson.

"It bothers me a lot that you want to broadcast that you're associating with black people. Do you have to?" Sterling allegedly tells Vanessa Stiviano. "You can sleep with [black people]. You can bring them in, you can do whatever you want.  The little I ask you is not to promote it on that ... and not to bring them to my games."

Sterling's comments are clearly offensive, but the absurd nature of his rhetoric should not distract from the real problem — Sterling is not just a loudmouth, he's a racist who puts his money where his mouth is when it comes to prejudice. In fact, Sterling has previously been investigated by the Department of Justice for racially based housing discrimination.

But it would be a mistake to write off Sterling's comments as the racist ramblings of an out-of-touch businessman. In fact, Sterling is really just one example of the how extremism in the Republican party is increasingly able to dominate the narrative.

Separately, these examples are racist flare-ups, but together they suggest a pattern. If left unchecked, the Republican party may find itself unable to woo youth and minority voters this election cycle. But unfortunately for millennials, such an election coup may not be enough to prevent racially-charged policy decision from taking a toll on the demographic.

The saga of Nevada rancher Cliven Bundy is a perfect example of the right's dangerous flirtations with the fringe. Bundy, who has been hailed as a conservative hero for weeks, instigated an armed stand-off with the Bureau of Land Management over $1 million in unpaid grazing fees. It wasn't until Bundy's outlandish views on race and "the Negro" came to the light did the Fox News crowd slow their supportive commentary.

I want to tell you one more thing I know about the Negro ... They abort their young children, they put their young men in jail, because they never learned how to pick cotton. And I've often wondered, are they better off as slaves, picking cotton and having a family life and doing things, or are they better off under government subsidy? They didn't get no more freedom. They got less freedom.

Is this your hero, GOP? A man who sounds like he might be stuck in the year 1814?

Hitting closer to home, however, were the comments of influential (and relatively young) Rep. Paul Ryan (R-Wisc.) who recently blamed an "inner city" problem for high rates of black unemployment:

We have got this tailspin of culture, in our inner cities in particular, of men not working and just generations of men not even thinking about working or learning the value and the culture of work, and so there is a real culture problem here that has to be dealt with.

While not using the plantation language of Bundy and Robertson, Ryan's intent seemed clear to colleagues like Rep. Barbara Lee (D-Calif.), who called Ryan — in subtle and not so subtle ways — a racist. Eventually, a backpedalling Ryan claimed he had been "inarticulate." But was that non-apology enough?

The GOP, despite its outreach to youth and minorities, is still dominated by white men. And while racial bias is difficult to quantify, data also suggests that more Republicans than Democrats exhibit signs of "implicit racism." What is more clear, however, is that as long as Republicans engage with extremists like Sterling and Bundy, publicly praise rogue rednecks like Robertson or resort (even inadvertently) to racially coded language like Ryan, they may never be able to gain traction among communities of color.

After all, these types of comments have real-world consequences. Comparing the recent flurry of racist comments, Michael Eric Dyson, a Georgetown University professor, told MSNBC's Chris Hayes last Friday that in American rhetoric, there exists "a continuum of racialized beliefs," some implicit, some explicit, but all connected. Whether the racism is covert or overt, however, people of color are the most likely to be harmed and undermined by their aftermath — discriminatory policies such as opposition to affirmative action programs in education, employment and housing.

With the 2016 election fast approaching, it will be critically important that voters, especially those in minority communities, not view the year's spate of offensive comments in a policy-free vacuum.

As the GOP becomes older and (stays) white, the danger that their policies will attempt to maintain some semblance of white male supremacy looms larger and larger — and if this happens, it will almost certainly be at the expense of young people of color. The NBA has since taken action against Sterling, smacking him with what looks to be a very large fine. But if we don't start working to eradicate the greater problem, the millions Sterling will have to pay the league will look like chump change as compared to the consequences his party's policies could have on generations to come.