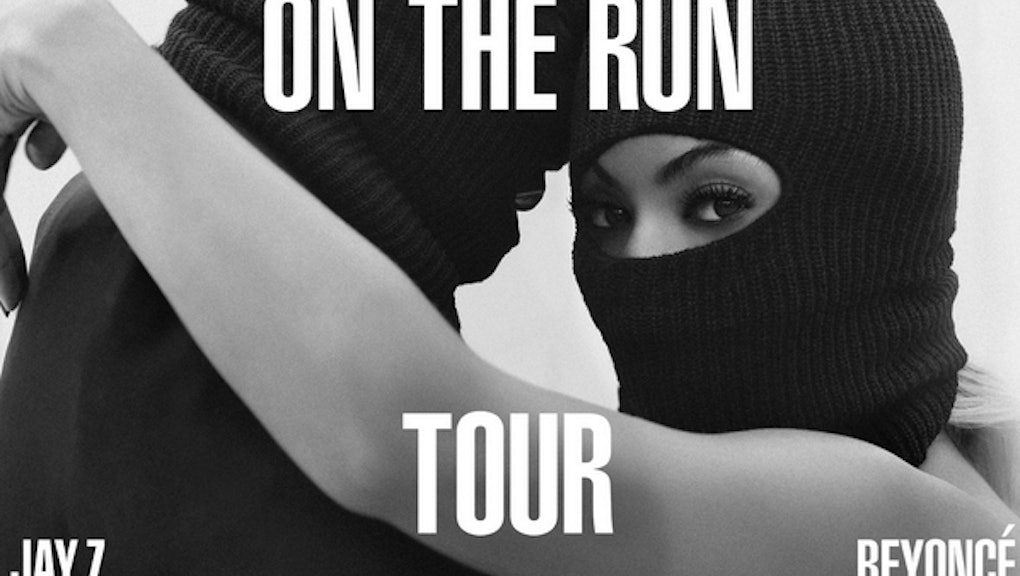 The news: It's happening, America.

Beyoncé Knowles, Queen Bey herself, put all speculation to rest around whether she and husband Jay Z would embark on a multi-city concert tour this summer. April 28 will henceforth be remembered as the day this image appeared on the pop icon's official website:

Yes, indeed. Following a rumor dropped by the New York Post's Page Six blog on April 15, fans have been eagerly awaiting confirmation from the duo. Now the wait is over: According to Beyoncé's site, exclusive On the Run tour presale tickets will be available tomorrow morning — April 29 — at 8 a.m. to members of her official fan club. General presale will continue through 10 p.m. May 1, with general tickets going up May 2.

The tour will visit 14 U.S. cities and two in Canada (listed below). It kicks off June 25 in Miami and wraps up August 5 at San Francisco’s AT&T Park.

Since then, the pair has frequently popped in for surprise performances at each other;s shows: To date, they've performed their duet "Drunk in Love" at the Grammy Awards, Jay Z's DirecTV Super Bowl XLVIII party performance and Beyoncé's O2 Arena show in London, in addition to appearing as guests in other artists' Coachella sets.

But let's talk business: Beyoncé's recently wrapped world tour grossed "well over $200 million," while legs of Jay Z's Magna Carta tour sold out so quickly — “within seconds,” according to reports — he had to add more stops.

The 44-year-old rapper's last collaboration took him around the world with Justin Timberlake for their Legends of Summer tour in July and August 2013. According to Forbes, he personally brought home over $1.5 million for each of the show's 12 stops, which cumulatively grossed almost $70 million.

This is all to say the Knowles-Carter household income is primed for a massive boost in coming months. Ticket prices are TBD, but if you plan on attending it's probably wise to get cracking on that top Ramen diet to save up.

*Conspicuously absent is a stop at Barclay's Center in Jay Z's hometown of Brooklyn. Keep an eye out for developments.