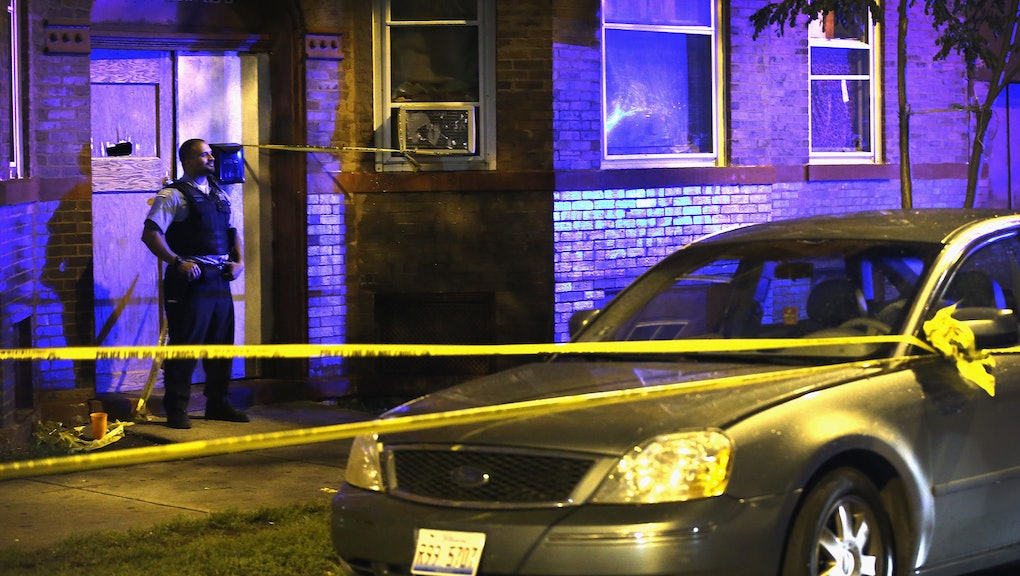 39 People Were Shot in Chicago This Weekend, and the Media Barely Covered It

The news: On a news weekend dominated by the LA Clippers and their racist owner Donald Sterling, a horrific story flew completely under the radar: 39 people were shot in Chicago.

These shootings wrapped up an especially violent string of April weekends in the city. The Huffington Post reported 27 people shot in the three-day span ending April 6, with 36 shot and four killed the following weekend. Matters only worsened from there, as Easter weekend closed with a whopping 45 shot and 8 killed. By April 28, the month’s total number of people shot on weekends alone stood at 147.

147. That’s a big figure for the national media to tune out. For context, that’s more than the number of U.S. soldiers who’ve been killed in Afghanistan all year and just 13 shy of last year’s casualty total.

Chicago’s mayhem-plagued month is filled with unique horror stories: Last Sunday night, for instance, the Tribune reported four girls and a boy ages 11 to 15 were shot from a car that pulled up next to them as they were walking home from the park. It was 7:30 p.m.

The Daily Beast also reported that a 30-year-old man shot and killed two teenage boys following a spat on Facebook. Not long after, a 17-year-old primed to be the first in his family to graduate from high school was murdered. He had allegedly planned to take his mother to prom because she’d been unable to attend her own.

What’s going on? The victims vary in age, background and occupation, but one link remains constant: Most are casualties of a gang epidemic that’s plagued the city for years.

Aaron M. Renn at New Geography writes that the uptick in gang violence stems from a number of factors, foremost being rampant poverty and the loss of social capital spurred by depopulation. Since the turn of the century, Chicago has lost more than 200,000 people. Worsening matters is the disorder and fragmentation that's followed a number of successful police takedowns of local gang leaders. The demolition of numerous major public housing complexes may have also led to the dispersal and redistribution of crime, "as research in other cities has suggested."

Add these to the fact that Chicago cops have seized over 1,500 illegal guns this year so far, and you have a recipe for disaster. The numbers from this past weekend are especially troubling because they’ve been worse in the past. And we mean much worse: In 2012, an estimated 2,448 shootings contributed to 532 deaths, while 2013’s "vastly improved" figures still saw 1,864 shootings and 415 murders.

The city has since been nicknamed "Chiraq" in response to its newfound reputation. But the striking lack of news coverage remains disconcerting.

Perhaps we’ve been conditioned to accept this violence as a normal extension of "ills" confronting the inner city — a mistake the news media is complicit in enabling. But aside from fueling our ignorance, normalizing this also perpetuates a much bigger crime: We deny the victims their humanity.

Put simply, it’s never "normal" when 39 people are shot in one weekend, even if it happens as frequently as it did this month in Chicago. Failing to treat it as anything short of a major tragedy is simply inexcusable and disrespectful to the victims and their families. The world is undeniably filled with underreported horror stories. But for an American media machine so morally outraged by an old billionaire’s racist comments, the moral conundrum presented by Chicago should have ruffled a few more feathers and generated more calls to action.

Just because this seems like a familiar story doesn't mean it's any less worthy of media attention. And no matter where a tragedy this awful occurs, it should in no way influence the value placed on the victims' lives.