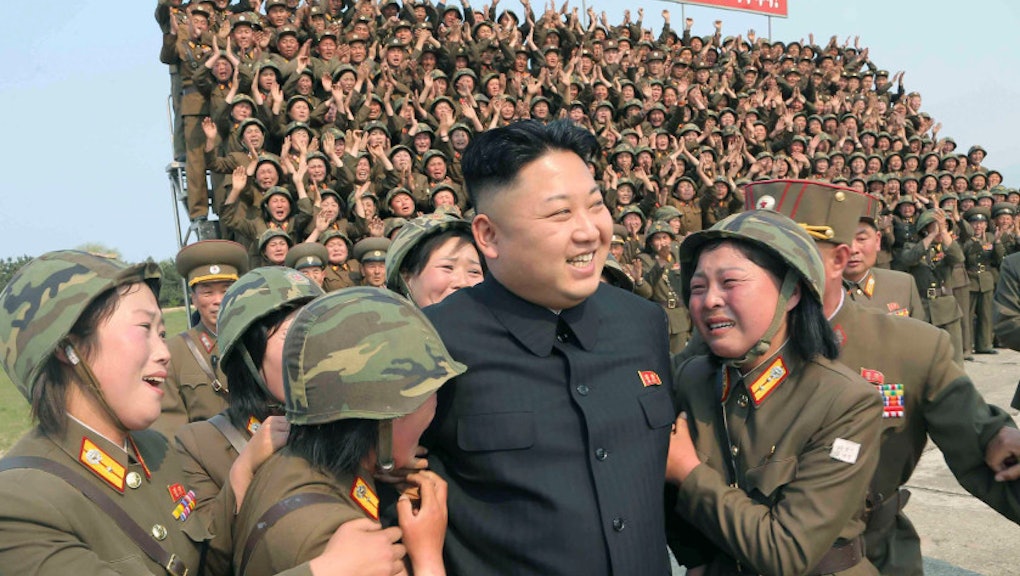 If You Thought U.S. Sexism Was Bad, Listen to What Kim Jong-un Just Broadcast on State TV

The news: Kim Jong-un has been having some bad PR lately. The North Korean dictator has been accused of everything from feeding his uncle to the dogs to going full Bond super-villain and executing a former aide with a flamethrower. And the hermit kingdom's tight-lipped government, which has done little to dispel these mostly made-up rumors, may have just made him look even worse.

On Sunday, the North Korean government's official news agency released a statement on South Korea's ferry disaster and President Barack Obama's visit to Seoul. One would hope that in the shadow of such tragedy, Pyongyang might hold back its punches for a while. Alas, Kim's administration instead decided this was the opportune moment to launch a sexist tirade against South Korean President Park Geun-hye and her decision to host Obama.

"What Park did before Obama this time reminds one of an indiscreet girl who earnestly begs a gangster to beat someone or a capricious whore who asks her fancy man to do harm to other person while providing sex to him," wrote KCNA, North Korea's state news agency. "She thus laid bare her despicable true colors as a wicked sycophant and traitor, a dirty comfort woman for the U.S. and despicable prostitute selling off the nation."

And while Kim's name may not have been signed directly underneath the hateful statement, it may as well have been. The state media is not allowed to run anything without the explicit approval of Kim's tight circle of advisers, which means this latest round of misogynist insults may well be coming from the horse's mouth.

It gets worse. While KCNA's insults are bad enough on their own, you have to take Korea's painful past into context in order to understand the full, damaging implications. During World War II and Japanese occupation, hundreds of thousands of Korean women were abducted by the Japanese military and forced into sexual slavery. The hurt and outrage over these "comfort women" are deeply embedded in the Korean consciousness and represent a dark chapter in the peninsula's history.

By attaching the "comfort woman" moniker to Park, the North Korean government not only took a cheap shot at a female politician but also insulted the experiences of those countless Korean women who were shipped away to foreign countries and subject to years of abuse. There's a huge difference between a prostitute and a comfort woman, something that KCNA seems to have failed to recognize.

It's a low blow even for North Korea. The North Korean government has been ramping up rhetoric against Park and her administration, and its attacks have been notably gendered and violent. Earlier this month, the state media ran a vitriolic series of articles titled "We accuse Park the bitch," which did not focus on her foreign policy or her hardline status against the North, but rather on her appearance, her demeanor and the fact that she's never been married or had children.

Though North Korea has never been one to shy away from an angry exchange of words, it's hitting a new low with its aggressive, sexualized tone — something that none of Park's predecessors had to deal with. And while it's easy to dismiss anything coming out of the North Korean government as crazy talk, now we know that Kim is a sexist and a rape apologist as well.