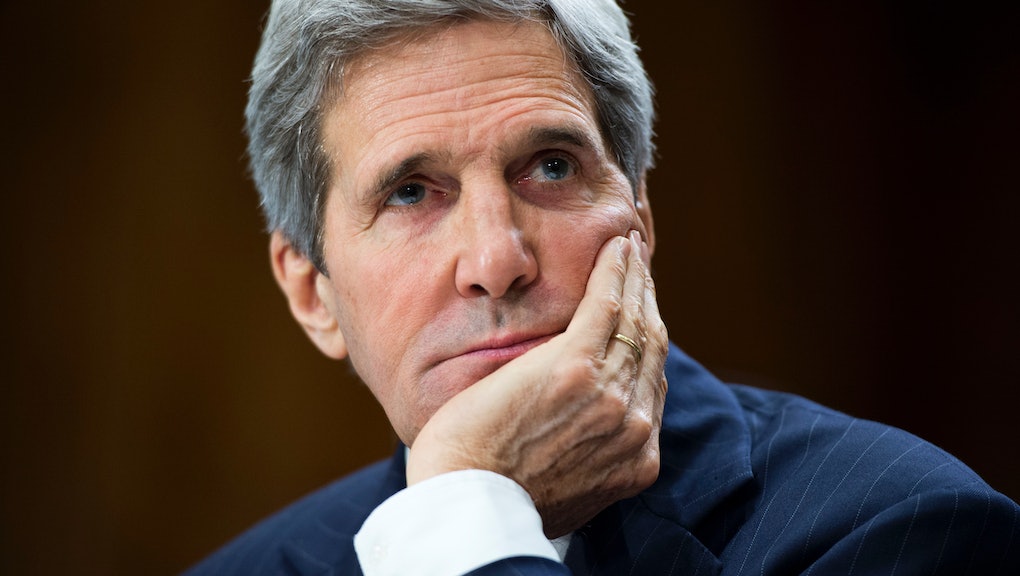 Most people can pretty much agree that a free and open Internet is extremely important for a number of reasons, but few major American politicians have gone on the record saying so. Many have come out in favor of net neutrality, but few have gone as far as to call the Internet a right. That is, until now.

Secretary of State John Kerry has been hitting the rounds on the international circuit with big claims that unfettered Internet access is a "fundamental right." As VICE points out, Kerry has been attacking foreign governments — namely Russia and Venezuela — for aggressively monitoring, limiting and censoring their peoples' Internet rights.

"The places where we face some of the greatest security challenges today are also the places where governments set up firewalls against some of the basic freedoms online," Kerry said at the annual Freedom Online Coalition conference, according to the Hill.

But while Kerry trots out the rhetoric internationally, Americans are being bled dry for subpar service and an infrastructure that's increasingly unable to meet consumer needs. For all of Kerry's grand posturing, there's a certain hypocrisy in proclaiming the right for people to freely access the Internet even as the U.S. auctions off those rights at home to the highest bidder.

Freedom! The state of the American Internet isn't great right now, thanks in part to a de facto rentier's market where Internet Service Providers roll in the dough without really needing to deliver quality service. Despite a burgeoning tech industry (8 of the 10 biggest tech companies in the world are U.S.-based), Americans lag far behind when it comes to quality Internet service. The World Economic Forum recently ranked the U.S. as not No. 1, not No. 2, but No. 35 worldwide in terms of broadband bandwidth capacity.

And even more depressing, the U.S. is actually ranked 20th in terms of the percentage of the population that's actually jacked in.

But there is one thing America is pretty good at: sucking the most dollars/Mbps out of consumers possible. Americans pay a lot more for their crappy Internet than the rest of the world, even adjusting for purchasing power parity.

This is at the same ISPs in America are posting record profits while the cost of delivering data continues to plunge.

No one's happy. Consumers are pretty fed up with this mess — not a single service other than Verizon FiOS beating a satisfaction score of 70 in a 2013 survey. "High monthly costs and problems with both reliability and speed" were cited as the primary reasons the U.S. hates ISPs. That places ISPs right alongside airlines, subscription TV and Internet social media companies as the only industry to achieve such low rankings. But ISPs still want more of the pie and are determined to remove open web rules as a method to both forestall upgrading their lagging infrastructure and cash in on content producers like Netflix, which relies on ISPs to stream high-bandwidth video services to customers.

A losing battle. As many in the tech world have noted, it's a battle that consumers are losing to telecommunications giants like Comcast, Time-Warner Cable and Verizon. Net neutrality is basically dead, replaced by a pay-to-play scheme in which content producers can now pay for higher-speed access to their customers. ISPs aren't upgrading their services because there's little competition in the market and most customers aren't yet hitting the need for faster service. A pay-to-play scheme both passes content producers' cost for premium service onto the customer and lowers incentives for ISPs to upgrade their infrastructure. And it will put much more pressure on the Internet's startups when they try to compete with established companies that can offer premium access. None of this bodes well for the Internet in the long run.

Vox's Nilay Patel writes that these political battles threaten to destroy the Internet as we know it, while the FCC's recent decision to regulate the pay-to-play structure by disallowing vaguely defined "commercially unreasonable" manipulations of the rules is doomed to failure. As he writes:

"The problem is that the Internet is so central to our economy and our future that these short-term pragmatic politics aren't enough to protect it — especially not against service providers who have no competition, no fear and endless legal dollars to spend fighting for what is a guaranteed boost to their bottom line. If you're Comcast, would you rather invest in risky new products that customers might not buy, or in lobbying and litigation that will eventually allow you to simply charge Netflix and Apple and Amazon more money to stream the same videos? If the only check on your power is an ineffective FCC, why wouldn't you push the boundaries as far as you can?"

Even if you trust FCC Chariman Tom Wheeler (a former top-ranking lobbyist for cell phone and cable companies) to regulate this environment fairly, his successor or the next might not.

What to do? The alternative that makes the most sense, minus the political pressure, is reclassifying Internet access as a utility, much like gas, electricity and land-line phones. ISPs in the U.S. currently insist they are providing a service rather than a utility on the basis of various values-added such as email addresses, data backup and search engines. However very few people use these native services, and as a TechDirt user noted back in 2009, the available services on offer rarely make sense. Reclassifying Internet access as a utility would expose ISPs to greater regulation and oversight, and likely force prices down. Of course, the FCC won't do this ... seeing as how it's stacked with ISP lobbyists.

Americans have mostly unrestricted freedom to use the Internet, but our quality of service is abysmal. This should concern everyone, not just Internet junkies and young techies. As the U.S. rapidly becomes a more digital society, the question of service and who controls it will be tantamount to ensuring Americans can continue to use the Internet to innovate and create, rather than be trapped by a rentier's market that reeks of Ma Bell.