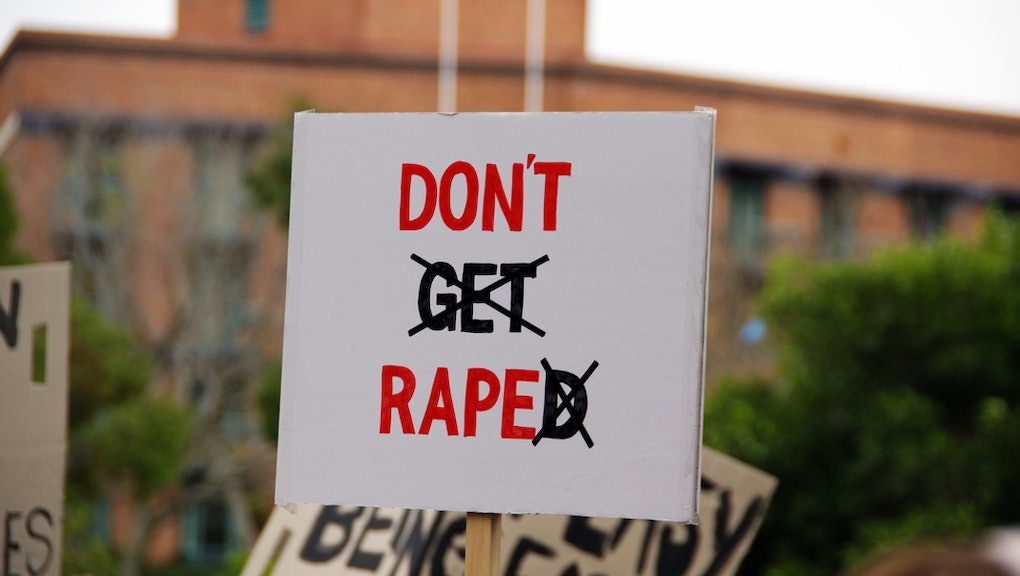 At This College, Rapists Are Allowed to Pick Their Own Punishment

Another day, another example of a college potentially mishandling the sexual assault of one of its students. Wednesday's addition comes by way of Central College in Pella, Iowa, where authorities reportedly allowed a male student to pick his own punishment from a list of options after he had allegedly forced a fellow student to have sex.

The alleged assault happened in March 2013, when a 20-year-old student athlete said she told a male peer she wasn't ready to have sex. The Des Moines Register found that the school's investigative report notes that the woman said "no" and tried to fight his advances. He eventually forced himself on her and tried to silence her yelling with a pillow. The man's version says it was she who asked if he had a condom and initiated sex.

In April the case finally had a hearing in front of the school's five-person Sexual Misconduct Hearing Committee. The panel's decision, according to the Des Moines Register, was that the male student "more likely than not" committed the offense. The panel also noted that there was no reason to believe that the mental health problems the victim experienced following her assault were "feigned or attributable to any other cause."

More problematic was the panel's decision that, owing to "discrepancies between the two individuals' perceptions and explanations of their relationship and the incident," the perpetrator would be given a choice: Either be expelled, or graduate and not walk in the ceremony, with the caveat that Central College might notify future schools or employers that he had broken a code of conduct rule. It's not too difficult to guess which option the senior picked.

Both students have appealed the decision, and Central College president Mark Putnam has since criticized news outlets for unnamed inaccuracies in the reporting of the case. However, either way it seems clear that college officials made serious mistakes in the way this case was handled. The panel's waffling on the believability of the victim sets an even more dangerous precedent, given that so many rape cases already come down to "he said, she said" defenses.

Like so many other victims of sexual assault, the student initially waited to report her assault, but started showing symptoms of trauma and had to be taken to an emergency room in October because she was suicidal. Later that month, her father told the dean of students and other school officials that his daughter said she had been raped.

In a potentially disastrous failure, the college reportedly sat on her complaint for months before opening an inquiry in the spring. The male student was not asked to leave the dorms for weeks and was also notified of the complaint by officials.

Sexual assault cases and their mishandling has finally become such a high-profile issue the executive branch itself has spurred to act. On Monday, the White House issued some tough guidelines for colleges to cut down sexual assaults. It also pledged to start a new website, NotAlone.gov, in an effort to better track enforcement better and provide victims with information. The White House's acknowledgment of the problem is a huge and badly-needed step, but it will ultimately be up to the colleges to implement and enforce the guidelines.