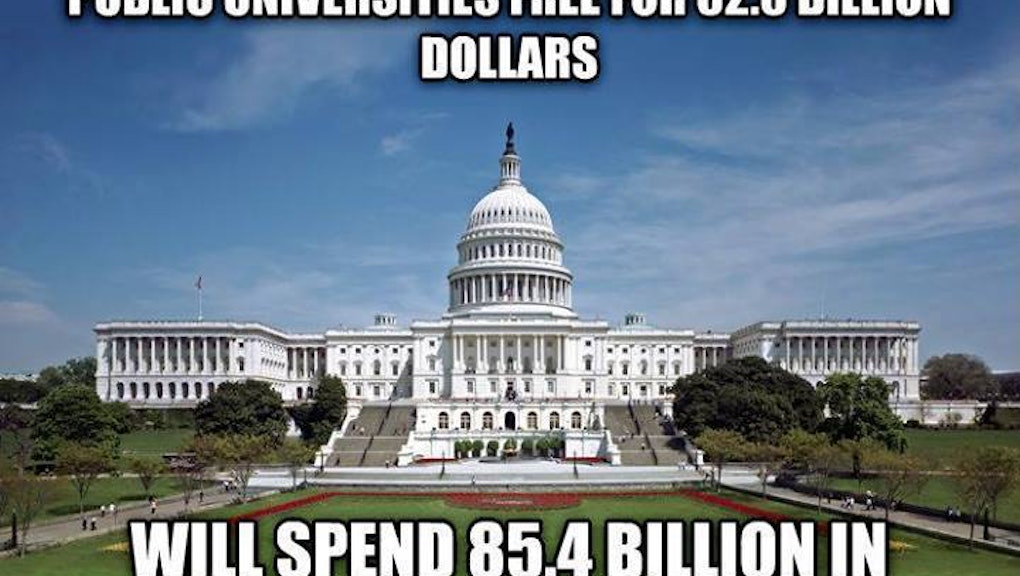 $62.6 billion. That's how much the U.S. Department of Education estimates public institutions collected in tuition fees in 2012 across the entire United States. That's also less than the $69 billion the New America Foundation says the country spent in 2013 on financial aid programs like Pell Grants and work-study programs alone. As the Atlantic's Jordan Weissmann notes, that $69 billion is just the tip of the iceberg, not even including federal loans.

Basically, the U.S. government could afford to pay for the remaining tuition of every public college student, after state and local expenses, for a fraction of the total it spends to subsidize those degrees, which covers most of the college students in the country. According to NCES statistics, 15.7 million students attended public two- or four-year institutions in 2013, compared to just 6.1 million in private institutions.

Too Many War$. Now compare that to $85.4 billion for FY2015 in Overseas Contingency Funds the U.S. is planning to spend during the wind-down of the war in Afghanistan. The Center for American Progress quotes a somewhat lower number, $79 billion, but the point remains. Even as we're slowly and painfully extracting ourselves from Afghanistan, we're still pouring more money down the hole into an unnecessary war in Central Asia than it would take to provide free public college to every student. And don't even ask about Iraq, which costs up to $1.7 trillion and counting.

If the U.S. can afford to dump money into a black hole for a decade of pointless wars, surely it could have afforded to instead use that money here to relieve millions of students of the burden of tuition, which is probably the biggest factor behind why the average graduate in 2012 owed around $29,400 in student loans. (The $1 trillion-plus in student loans spread out among 40 million Americans could have been mostly wiped out by the direct cost of either war.)

Mo' Money, Mo' Problems. Our wars in Iraq and Afghanistan are just one obvious way the U.S. government has allocated our dollars exceptionally poorly lately. Harvard economist Jeffrey Miron, for example, calculated in 2008 that the annual savings that could be derived from ending the War on Drugs would amount to $41.3 billion yearly, with an additional $8.7 billion that could be derived from taxing marijuana similarly to alcohol and cigarettes. The F-35 fighter jet program will end up costing around $1.5 trillion over 55 years, making it one of the most expensive projects in history. That's somewhere in the neighborhood of $27 billion for every year of service.