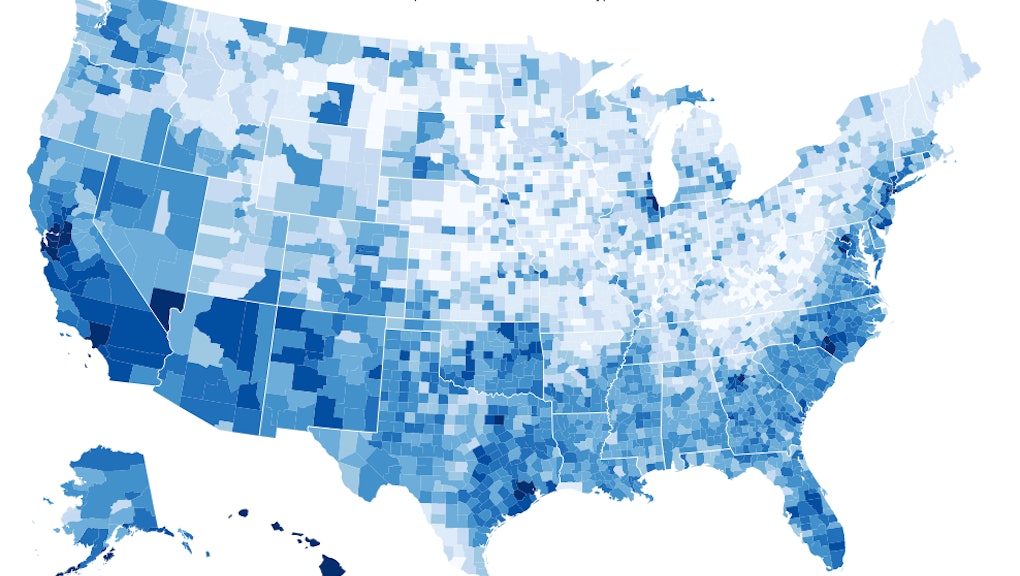 The Most Diverse Counties in the U.S. Are Not Where You'd Expect

The news: The numbers are in, and (surprise!) America is changing.

By almost every conceivable measurement, racial diversity is on the rise, whether via interracial marriages, immigration, mixed kids or the shifting demographics of neighborhoods.

Yet all is not melted in this melting pot of ours. A recent map by Randal Olson depicts how racially mixed each county in the U.S. actually is, and the results may surprise you:

With the darker blue counties representing more diversity, it quickly becomes clear that a huge swath of the Midwest and Northeast remains starkly segregated, and according to Olson, "homogenously white." To illustrate further, here's a breakdown of some of their cities:

Yet even metros within the diverse counties face similar problems:

The point? Despite a growing minority population and ever-increasing rates of intermixing, we remain, for all intents and purposes, a nation divided.

It's certainly no surprise that areas with long histories of legally enforced apartheid, including redlining and other forms of housing discrimination, maintain stark racial divides. What will be interesting to see moving forward is how regions with new and fast-growing metros reflect the changing demographics of our population.

Take Las Vegas: With a 41.8% population growth rate between 2000 and 2010, Sin City drew nearly unprecedented numbers of residents to its newly built housing developments. Without the same legacy of segregation as northern cities, it is easier for people to set up residence in closer proximity to one another, regardless of race.

This is true of many states in the Sun Belt, the southern region of the country stretching approximately from the Carolinas to Southern California. Rapid population growth in these areas is leading to increased racial diversity, a pattern clearly reflected in Olson's map.

Yet interestingly enough, the most diverse counties probably aren't where you'd expect. Olson drew his data from the most recent U.S. Census, which tracks people based on six racial categories: White (non-Latino), African-American, Native American, Asian-American, Latino and Other. He then took the data and picked apart which counties had the most even distribution of each category.

Here are the five most diverse:

And the five least diverse:

That's right: Alaska takes the top two spots. According to the Atlantic, the Aleutian Islands have seen an influx of new and diverse residents due to their evolution into a hub for oil drilling. As can be seen with the Sun Belt, the pattern holds true here: Population growth is largely linked to racial diversity.

What can we learn from this? If you want to raise your likelihood of living in a racially diverse area, the solution might be simpler (and cheaper) than a move to the big city. Opt instead for somewhere new jobs and new housing are popping up. It's worked for people in the Sun Belt, and perhaps, with time, it will spread to the rest of the country.