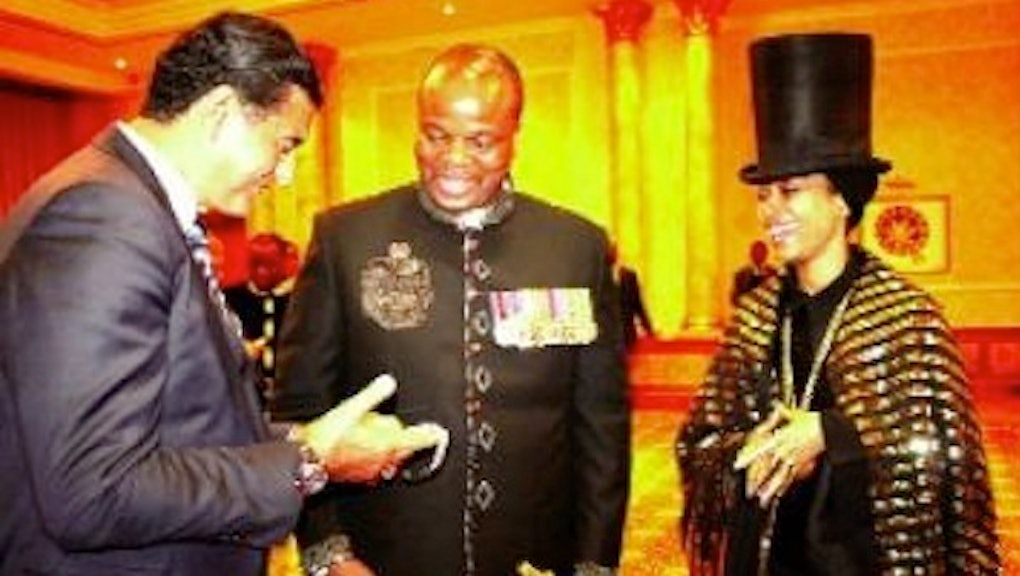 The news: It's been a rough week for Erykah Badu.

One minute she's singing "Happy Birthday" to an African king, and the next she's being lambasted by human rights activists for endorsing the continent's "last absolute monarch" — the brutal and despotic Mswati III of Swaziland:

How did this happen? According to the Dallas Morning News, the R&B icon "thought nothing of it" at the time. Her "acquaintance" Jacob Arabo had invited her to perform for the Swazi king's birthday, in part because she was already recording in neighboring South Africa.

So Badu hopped on a quick flight, sang to a "packed-house stadium" then handed Mswati a gift before leaving to stay at a friend's house. "It was harmless," she said.

But actually, it wasn't. According to Jeffrey Smith of the Robert F. Kennedy Center for Justice and Human Rights, it's "highly unfortunate that someone of Erykah Badu's international stature would use her star power for inherently reprehensible reasons — namely, to provide legitimacy, and, in a sense, endorse a brutal dictator who both manages and directs every facet of Africa's last absolute monarchy."

George Ayittey of Human Rights Foundation International added: "For an artist who claims in her music and her philanthropy that she believes in the struggle against unjust government policy, Badu's celebration of Mswati is the height of hypocrisy."

They both have a point: King Mswati's dubious human rights record features highlights like a wholesale ban on political parties, "prohibition of peaceful gatherings and widespread use of the security forces to harass, arrest and torture dissidents." Not to mention his lavish lifestyle in a nation where 63% of people live on less than $1.25 a day and face the "world's worst HIV/AIDS epidemic."

So how did Badu respond to these revelations? Not so well: In an increasingly defensive series of tweets, she claimed:

1. That she was unaware of the nation's "political climate" and had not been paid for her appearance:

2. That actually she was paid, but gave the money to Mswati's servants:

3. That she'd been to Swaziland before, but not during "election season:"

4. That, oh yeah, dictatorships don't have elections, but that's kind of the point(?):

She also called one guy a "monkey:

It's pretty clear that Badu knows nothing about what's going on in Swaziland. Like, absolutely nothing. And plenty of outlets have given her grief for it, from Billboard and Rolling Stone to TIME and Slate's disdainfully titled takedown "Twerking for a Dictator-King."

Most of them lump Badu with singers like Mariah Carey, Sting and Beyoncé, who’ve all been criticized for performing for dictators and lending legitimacy to, or even profiting from, the suffering of their people and neighbors. But there's something clearly missing from this argument — namely where our own government fits the narrative.

It comes down to this: If we're going to blast Badu for "legitimizing" leaders implicated in torture, mass murder and crackdowns on dissidents, we can't then ignore the "interrogation" practices of Guantanamo Bay, the escalating global drone strikes and the massive, and often racist, surveillance apparatus supported and maintained by the Obama administration.

It's certainly easier to pass sweeping moral judgments on African nations and their leaders. After all, they're foreign, mysterious and routinely divorced from the historical context that created their "political climate" to begin with.

But while Mswati's methods are indefensible, his "Othernes" lets us appraise him more harshly for practices that are, in fact, eerily similar to those of our own government. Imagine if every time an artist performed for President Barack Obama, they used it as an opportunity to decry his policies — as HRF suggested Badu do in Swaziland.

This recommendation is rarely made, however. And we're a weaker country for it. Perhaps we expect too much of our artists, considering Badu is already slated to perform for the brutal Gambia regime next month. But at the very least, we should start applying the same moral outrage vented here whenever our own government is implicated in wrongdoings.

Too often do we remain silent. And without this basic moral consistency, how much change can we really expect?