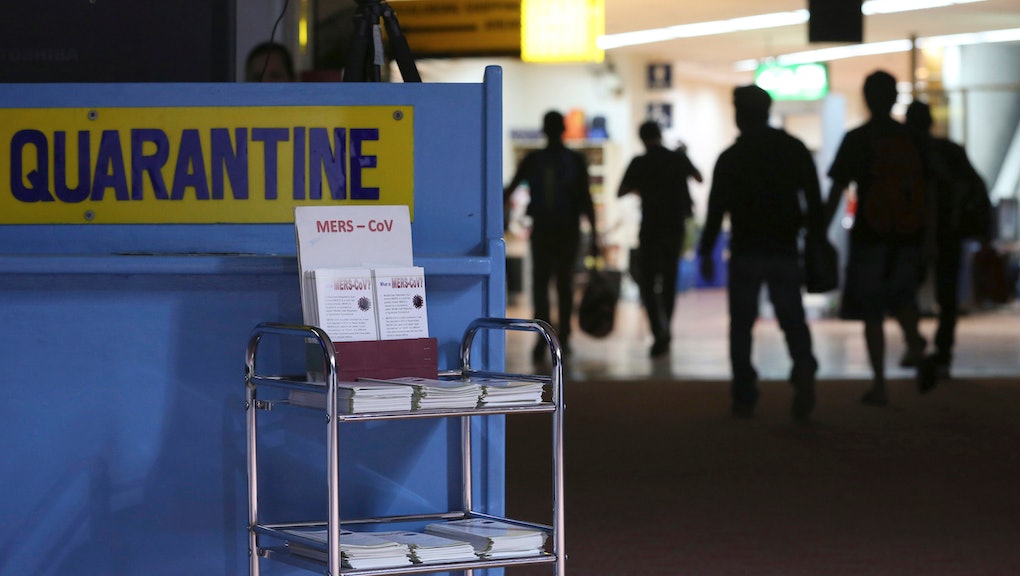 A Disease Three Times More Deadly Than SARS Has Made It to the U.S.

Last month, news came of an outbreak of a deadly virus called MERS-CoV (Middle Eastern Respiratory Syndrome Coronavirus) that was sweeping through the Middle East and claiming more and more lives everyday. Considered three times more deadly than the SARS virus, the steady spread of MERS was frightening. But experts believed that it could only be transmit from diseased animals (like camels and bats) to humans and not humans to humans, meaning that the virus could hopefully be contained in the region. But as time passed, more cases of MERS were diagnosed in parts of Asia and Europe and now officials have just confirmed the first case of the deadly virus in the U.S.

On Friday, the Centers for Disease Control and Prevention along with Indiana health officials announced that a man fell ill after flying to the U.S. last week from Saudi Arabia where he was a health care worker. He has since been diagnosed with the first case of MERS in the U.S. Though the virus remains unable to spread from human to human and is therefore not highly contagious, it's still unclear how the man contracted the disease.

"Given the interconnectedness of our world, there's no such thing as 'it stays over there and it can't come here,'" said Dr. W. Ian Lipkin, a Columbia University MERS expert. Despite the virus' non-contagious classification, it was still only a matter of time until it was spotted in more places around the globe. However, experts and officials have continued to emphasize that, at the moment, MERS is not contagious and the general public should not be overly alarmed about the recent Indiana diagnosis.

Because the infected man used public transportation, the CDC is looking into all passengers who shared passage with him, but "there is no reason to suspect any current risk to travelers or employees at O'Hare Airport at this time," said CDPH commissioner Bechara Choucair.

While MERS continues to be a lethal virus, there's no reason to be overly alarmed. As long as it's unable to transfer between humans, you can rest easy that MERS will not be having any major outbreaks in the U.S. any time soon.