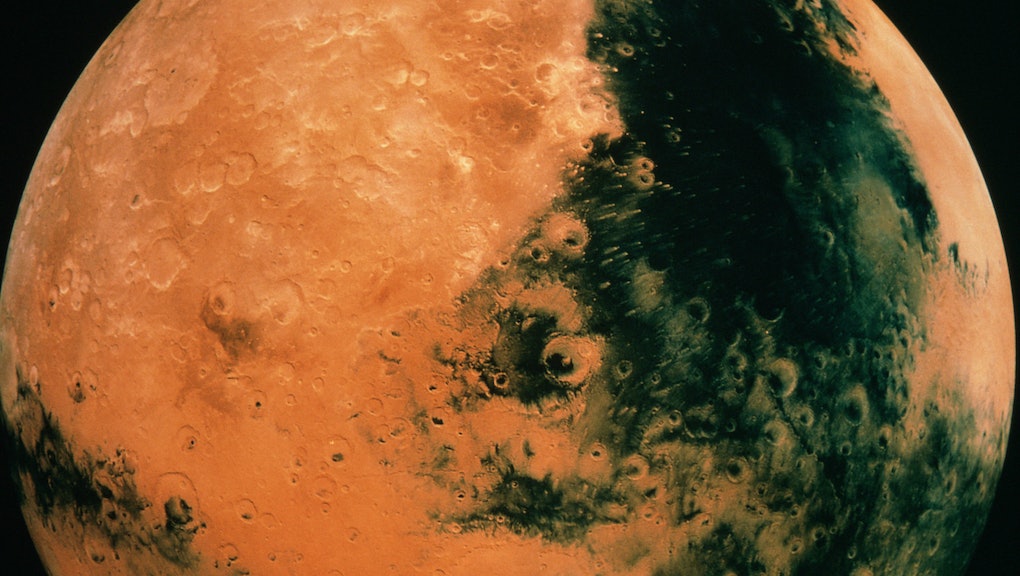 How Close Are We to Actually Finding Life on Other Planets?

Scientists have begun to put together the pieces of the puzzle that is our universe. NASA's recent discovery of Kepler-186f, the first habitable Earth-sized planet is big news in humankind's long search for extraterrestrial life. Thanks to the Kepler Space Telescope, which was launched in 2009 to hunt planets across the universe, we've managed to find around 1800 exoplanets so far, many of which have been discovered in just the last year or so.

But how close are we to actually finding life outside of Earth?

Humanity is still taking its first baby steps into space, and the answer to this question remains elusive. But three new discoveries provide tantalizing new evidence.

1. We might be able to sustain life on Mars.

Scientists have discovered that a microbe contamination on any future device sent to the Red Planet could quickly and easily spread across the planet's surface. A team of international researchers found that microbes that evolved to survive in hostile environments on our planet could survive both the vacuum of space and solar radiation.

"It was found that some ... are also partially resistant to the even more hostile environment of outer space, including high vacuum, temperature fluctuation, the full spectrum of extraterrestrial solar electromagnetic radiation, and cosmic ionizing radiation."

Another group of researchers found that bacteria exposed to the harsh conditions of outer space could have a 10-40% survival rate after 18 months. In a simulated Martian environment, that rate rose to an incredible 85-100%. And fungal endospores had a 50% survival rate when exposed to conditions equivalent to a trip to Mars.

So encountering life on other planets after accidentally introducing it to a terrestrial ecosystem might be the most plausible scenario for the discovery of extraterrestrial life. Furthermore, the studies suggest Earth life is very versatile, increasing the possibility that there are other life forms capable of surviving in extreme environments. And though the experimental periods used by researchers were extremely short, they at least increase the plausibility of lithopanspermia — the theory that life can spread through space on debris ejected from orbit.

Scientists suspect that Europa, Jupiter's sixth-closest moon, could harbor liquid oceans far below its outer crust where life could evolve. Burrowing through Europa's surface to explore the depths below is going to be an incredible challenge: the moon has an average surface temperature of -276.07°C, and scientists currently believe it could be over 12 miles thick in places. To do that, planetary scientists are looking at unconventional methods recently. Instead of sending a drill, for example, the European Space Agency is considering sending a rocket with a penetrator at its tip — essentially an armor-piercing bullet designed to punch through the ice. While the unit wouldn't go deep enough to explore Europa's hidden oceans, an integrated microscope, mass spectrometer and electrodes could analyze segments of ice, potentially determining whether the chemical signatures of life are present.

"We might not have to get all the way down to the ocean to look at whether anything is living in Europa's water," says planetary scientist Britney Schmidt of Georgia Tech.

Others researchers are hoping to find a way into the hidden oceans by developing burrowing cryobots that could melt their way through miles of ice by shooting jets of heated meltwater and launching a miniature submarine once it hits liquid water. Such a device would need a power source equivalent to a nuclear reactor.

Short of intercepting some kind of transmission, our ability to detect life in distant stellar neighborhoods is extremely limited. A recent study published in the Proceedings of the National Academy of Sciences titled "Some inconvenient truths about biosignatures involving two chemical species on Earth-like exoplanets" concluded that determining the chemical compositions of exoplanets is virtually impossible. Scientists looking for signs of methane and oxygen typically rely on specific signatures in the light passing through an exoplanet's atmosphere — say, as it passes in front of its local star. But lead author Dr. Hanno Rein says "The spectral resolution is so low, that we can hardly say anything about them."

"It's a fundamental physical limit, even if we had perfect technology that measures every single photon we receive from an exoplanet, there's just not enough photons reaching us to say whether there's life on the planet or not," Rein says.

And if the planet had a moon, the problem would be even worse.

"From a long way away an exoplanet and moon system would appear so close together that they couldn't be separately resolved, and would look like a single atmosphere to us," Rein says. "If one had oxygen and the other had methane, it would suggest an oxygen-methane atmosphere, providing a false positive for signs of life when none exists."

Rein says that looking for planets very close to the Earth system, or that orbit small red dwarf stars, would be better targets.

Finding life just in our solar system, though, could answer the question of life elsewhere. Says physicist Dale Winebrenner of the University of Washington in Seattle, "If we found life twice in the same solar system, it would tell us that when you look up at night, you're seeing lots of places where there might be microbes."