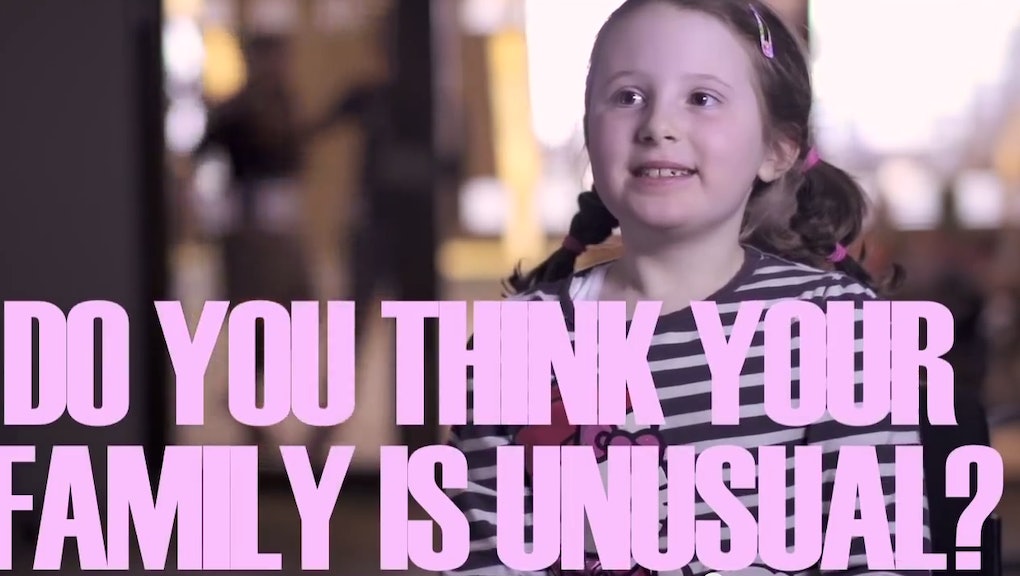 They want to make dinosaurs come back to life, change gravity and invent a car that doesn't burn fuel. But given a chance, these 10-year-olds wouldn't change a thing about their families — yes, even being raised by gay parents.

In a video filmed last year during the Imagine Children's Festival at London's South Bank Centre, interviewers asked a group of children about their hopes, dreams and family life. The results are heartwarming, and not because they're unusual; just the opposite, in fact. In interview after interview, the children make it clear how blissfully typical their home life is. Without ever coming out and saying so, the video is the perfect reubuttal for anyone who argues that gay parents are somehow worse for children than straight ones.

"Do you think your family is unusual?" the interviewer asks the kids. "No" is the common refrain. The message is simple: A loving family is a loving family no matter its color or shape, and kids simply don't care if they have two moms or two dads or something in between.

While their levels of awareness vary, some of the kids are also adorably proud of their parents. One boy sports a t-shirt reading "Some people are gay. Get over it." And that's his attitude toward his family as well. "Because my family's not awkward, it's just fine," the boy notes. "[The shirt] says, 'Get over it.' That's why I bought it."

While there are now quite a few high-profile gay and lesbian families, raising children with same-sex partners is becoming more and more common, especially in the United States. As many as six million American children and adults have an LGBT parent, and many states now allow parents to apply for a joint or second-parent adoption. Mississippi has the highest percentage (26%) when it comes to same-sex couples raising biological, adopted or step-children, followed by Wyoming (25%), Alaska (23%), Idaho (22%), and Montana (22%) are next, according to research by the Williams Institute, a national think tank at the University of California, Los Angeles, School of Law.

With gay and lesbian parents increasingly becoming the new normal, it's a little incredible that some people continue to argue that sexual orientation has any bearing on one's ability to be a good parent.

Sadly, some conservatives have continued to give voice to this idea, including U.S. Supreme Court Justice Antonin Scalia, who brought up the topic during arguments relating to Proposition 8. "There's considerable disagreement among sociologists as to what the consequences are of raising a child in a … single-sex family, whether that is harmful to the child or not," Scalia said at the time.

No disrespect to Justice Scalia, but in fact, the anecdotal evidence of this video aside, research heavily supports the idea that gay parents are just as fit as their straight counterparts. Writing in a report published by the American Academy of Pediatrics, for example, the authors note that science consistently shows absolutely no reason to give credence to such claims:

Extensive data available from more than 30 years of research reveal that children raised by gay and lesbian parents have demonstrated resilience with regard to social, psychological and sexual health, despite economic and legal disparities and social stigma. Many studies have demonstrated that children's well-being is affected much more by their relationships with their parents, their parents' sense of competence and security, and the presence of social and economic support for the family than by the gender or the sexual orientation of their parents.

So, what would make a family truly unusual, according to these kids?

"We're all normal, unless you could fly or had a long nose," one child tells the interviewer. It's pretty hard to argue with that.