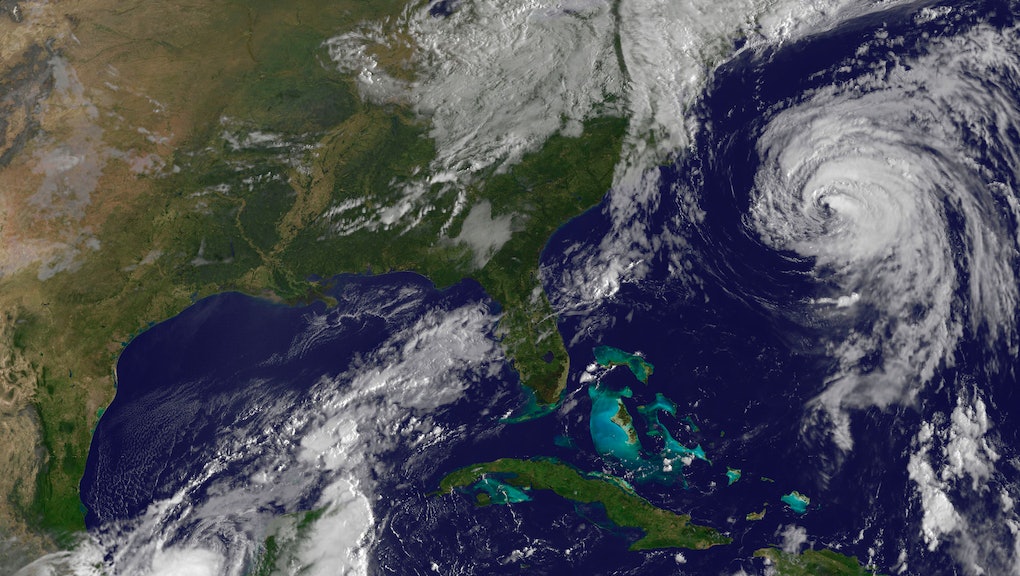 The White House Has Released The Definitive Report on Climate Change, And It's Terrifying

It was fun to pretend climate change wasn't a problem, wasn't it? Now it's time to face the elephant in the room. According to a massive new study — one being hailed as the definitive report on the impact of carbon pollution in the U.S. — climate change isn't just real, it's creating catastrophe around the country.

Water is growing scarcer in the driest regions of the U.S., and heavy rains are becoming more common in the wettest regions. Heat waves are now not only a regular occurrence, but are more severe than ever. Floods and rising waters are impacting not only America's farmland but urban centers like Miami and New York City. Wildfires are growing worse. Forests are being consumed by insects that have seen a population boom in the warmer climate. Thunderstorms and hurricanes are more menacing.

A group of 300 leading climate scientists and experts put together the congressionally mandated report, which was reviewed by the National Academy of Sciences.

Their conclusion is sobering: "Climate change, once considered an issue for a distant future, has moved firmly into the present," the National Climate Assessment says, adding that the evidence of man-made climate change "continues to strengthen" and that "impacts are increasing across the country."

To be even more clear, this is happening:

This could be the watershed moment for climate change. For years, the issue has been paid mostly lip service, reserved to political sound bites and not much political action. Climate change has been important enough that for every year since 1995, world leaders have summoned at annual UN climate conferences to hash out ideas to curb carbon emissions. But few solutions have come into effect. Novel answers like cap and trade were trashed. The U.S. has the lowest emissions pledge of any developed country.

In 2008, President Barack Obama campaigned heavily on the premise of taking broad steps to stem the effects of global climatic changes if he was elected president. But during his re-election campaign in 2012, Obama barely mentioned the issue. In his second inaugural address, Obama placed climate change at the forefront of his political agenda, but no major action has taken place. Meanwhile, Republicans voted to literally deny the reality of climate change.

And here we are, in 2014. ABC News meteorologist Melissa Griffin claims this year could be the globally warmest year on record, with 2015 even warmer.

"Summers are longer and hotter, and extended periods of unusual heat last longer than any living American has ever experienced," the climate report continued. "Winters are generally shorter and warmer. Rain comes in heavier downpours. People are seeing changes in the length and severity of seasonal allergies, the plant varieties that thrive in their gardens, and the kinds of birds they see in any particular month in their neighborhoods."

The new report is in line with a similar analysis provided by the UN in late March. As the UN report explained, climate change was causing worldwide problems including famine, war and mass migration. The most vulnerable parts of the planet are expected to be hit the hardest, worsening existing problems such as air pollution, coastal erosion in low-lying areas and the availability of water in sub-Saharan Africa — leading to climate change-related migration, conflict and security issues. The UN report warned that the problems caused by climate change are likely to grow substantially worse unless greenhouse emissions are brought under control.

"Americans face choices," the study outlines. Hard choices. Time is running out to save the U.S. from climate catastrophe. "Climate change presents a major challenge for society," the report warns. "There is mounting evidence that harm to the nation will increase substantially in the future unless global emissions of heat-trapping gases are greatly reduced."

There is a new groundswell of action building. Young people are leading the way to redefine the public perception of climate change as a non-issue. Studies show 71% of Millennials agree that the country should "do whatever it takes to protect the environment" and 51% say "stricter environmental laws and regulations are worth the cost."

They're even making public pushes to demand action. In 2011, thousands of young people supported by 30-plus environmental and constitutional professors filed suit against the Environmental Protection Agency and the Departments of Agriculture, Defense, Commerce, Energy and the Interior. Individual actions have been filed in all 50 states. All allege that government inaction on climate change violates their rights under the Public Trust Doctrine, which obligates the government to protect resources for the public's reasonable use.

It is, of course, only a tiny step in the right direction. Action on the issue won't be easy. However, as the effects of environmental issues like Hurricane Sandy and the California drought have demonstrated, there is no better time than now to attempt to take action.

Editor's Note: This story has been updated to remove language that was used without attribution to Forbes and the New York Times. We apologize to our readers for this violation of our basic editorial standards. Mic has put in place new mechanisms, including plagiarism detection software, to ensure that this does not happen in the future.