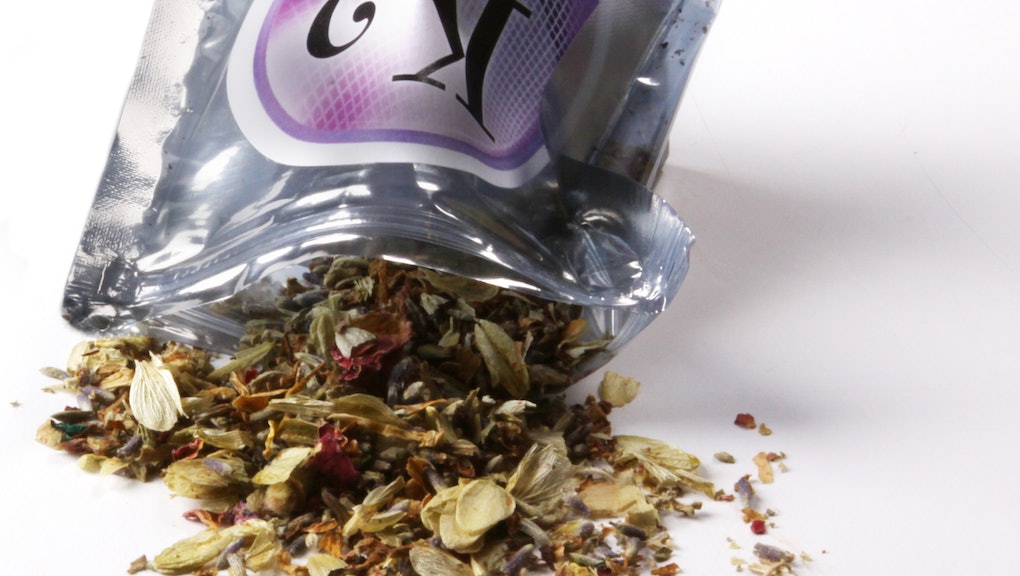 More than 100 people in a five-day stretch in Dallas and Austin, Texas have exhibited signs of overdosing after consuming K2, a poorly regulated form of synthetic marijuana. A doctor at Dallas' Baylor Medical Center said that "several of [the patients] came in with similar symptoms of psychosis, altered mental status, abnormal behavior." Police say the overdoses are likely related and originated from a single Dallas supplier.

Fake grass? Synthetic cannabinoids, known under brand names like "synthetic marijuana," "K2" or "Spice," are designed to mimic the effects of marijuana. These "drugs" are usually just a mix of herbs or dried flowers, which are then sprayed with solutions containing psychoactive synthetic cannabinoids that bind to the same brain receptors as weed. The DEA thinks synthetic cannaboids are typically made by chemists in Asia, and the synthetic drugs are smuggled into the country and applied to dried and distributed by local sellers.

In theory, users get high and the producers don't put themselves at any risk. It's a booming, and technically legal, industry in which the products are often sold in convenience stores or online (though in some states, including Texas, K2 is considered a "controlled substance"). Drug reform advocates say that marijuana prohibition has created a market for synthetic substitutes that's grown in the past several years due to the perception of synthetic alternatives as legal and safe.

But it's not marijuana. People are probably right to be concerned about these poorly understood narcotics. Synthetic cannabis' high can be very intense, and the side effects potentially severe. They range from "fast heartbeat, dangerously elevated blood pressure, pale skin and vomiting" to "severe, potentially life-threatening hallucinations and, in some cases, seizures." Some studies have even linked them to strokes in otherwise healthy adults.

John Huffman, a Clemson University organic chemistry professor who helped first synthesize cannabinoids as a medical marijuana replacement, said that "[p]eople who use it are idiots. ... It's like playing Russian roulette. You don't know what it's going to do to you. ... We don't know a darn thing about them for real."

Pharmacologist David Kroll, who wrote a useful primer on synthetic weed, says that he still gets comments on his article like the following [sic]:

"I smoked k2 and only k2 for about a year and a few months straight. When I was on it I was very aggressive, didn't have the sense of right and wrong. K2 was all I cared about and it gave me weed highs most of the time, but then I also experienced bad trips where I was projectile vomiting and also had mini seizers. I would slur my words and look mentally retarded. I hallucinated on it once and saw a group of people where there wasn't anyone but a friend and i."

Is it that big a deal? A dangerous and poorly understood drug on the market is pretty bad news. And with marijuana use on the rise over the past decade, there's a danger of consumer exposure, considering the legal and tempting substitute can be sold at places like gas stations. The Office of National Drug Policy claims 1 in 9 twelfth graders have tried it in the past year.

The latest rash of overdose incidents seems likely to have originated from a supplier who over-applied the active ingredient, or perhaps the packets were adulterated with other drugs. Regardless, the K2 industry is poorly regulated (if at all), and it was only a matter of time until something like this happened.

Either way, this is yet another reminder that people are turning to marijuana alternatives because of the prohibition on weed, which has killed no one and probably won't send users to the hospital racked with seizures. In fact, many people, including President Obama, say that real marijuana is safer than alcohol. Regulating marijuana and setting legal standards for it, like in Colorado and Washington state, could help prevent harmful substances from hitting the market.

"This is a pure side effect of prohibition," UCLA professor Mark Kleiman, who advises Washington state on drug policy, told the Daily Beast. "It may not be a good enough reason for getting rid of it, but it's certainly a reason."