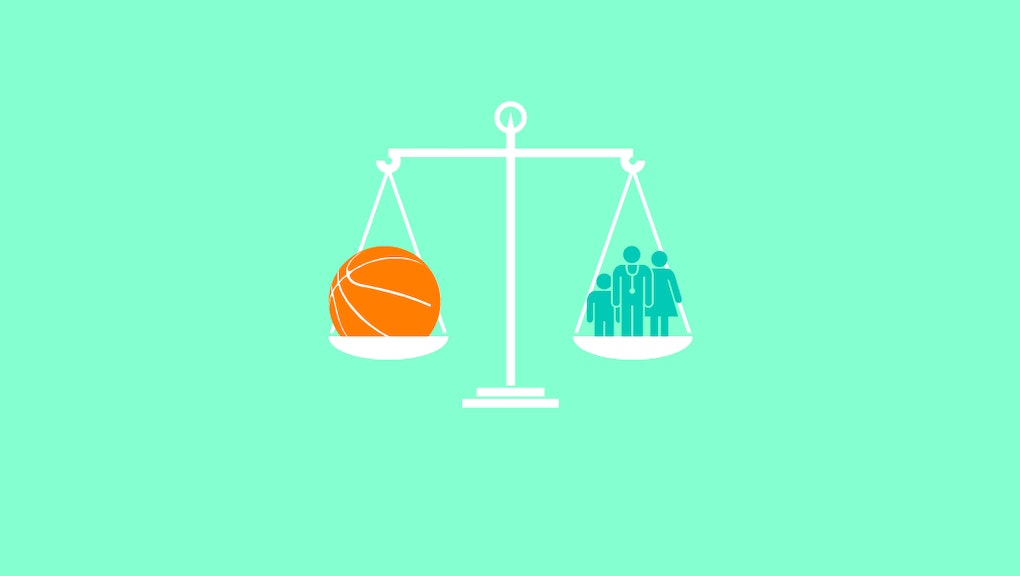 Why Donald Sterling Went Viral And Institutional Racism Didn't, According to Science

Unless you live under a rock, or don't go on Twitter (pretty much synonymous these days), you've heard about Donald Sterling. Immediately after a tape of the Clippers' owner making racist remarks was released by TMZ, social media outrage poured in. The news cycle squeezed every minute they could out of the scandal as a recording of Sterling going on about 'owning' his black players made headlines around the world. Even this week, his latest comments about how Magic Johnson should be "ashamed" of his HIV status have dominated our newsfeeds. But while the Sterling brouhaha was escalating, the Supreme Court announced a pivotal ruling upholding Michigan's affirmative action ban. And barely anyone talked about it.

In case you missed it: The Supreme Court decided that voters should be allowed to ban the use of affirmative action in public university admissions. Including Michigan, eight states currently ban affirmative action. The recent ruling creates a path for more states to consider similar legislation that prohibits the use of race in the admissions process at public colleges. The hard truth is that states with legislation banning affirmative action (like California, Florida and Michigan) have witnessed a sharp drop in black and Hispanic enrollment at their most prominent universities.

Judging by how much people talked about Sterling on social media, Americans care about protecting racial equality. And the implications of the affirmative action decision on racial equality were arguably much bigger then Sterling's private comments. So why did we spend all our time talking about the latter?

According to science, one piece of the puzzle may rest in the way that humans relate to controversy. Most people think that the more controversial a topic, the more buzz it will generate. But recent research from Wharton professor Jonah Berger and PhD student Zoey Chen reveals that our common intuition is missing a key part of the story.

In another study, Berger and Chen asked students to engage in conversation on a variety of topics with anonymous participants. They again found that topics of moderate controversy yielded the highest likelihood of discussion:

What both studies show is that our common intuition — that controversy increases conversation — is right, but only up to a certain point. After moderate levels of controversy, additional controversy actually decreases the likelihood of discussion.

So what's going on here?

In the case of Donald Sterling, the controversy was easy to discern. In-your-face racism, like a wealthy white man jabbing about his black team like it's some kind of plantation, is clearly bad. It's not complicated, and as a result is actually less controversial to talk about — all your friends are likely thinking the same way, so posting a link expressing outrage over Sterling's comments isn't likely to spark much debate. In comparison, a program like affirmation action, one that protects against more pernicious and less visible types of racism, is much more elaborate. That complexity allows for more polarizing opinions, which evoke greater passion, and ultimately make the topic much more controversial and uncomfortable to talk about.

Conflict increases the level of discomfort. We avoid that discomfort because it is based in feelings of social rejection and interpersonal conflict, two things nobody wants to deal with. Translation: Once things get too real, we prefer to go back to our cat videos.

So while the affirmative action had more wide-ranging implications, we stuck to Donald Sterling. Meanwhile, as a result of the Supreme Court's decision, thousands of students of color may not get the opportunity to go to college. Sadly, it seems that this systemic problem may not be getting much attention any time soon.

This article was co-authored by Elizabeth Plank and Adam Jaffe, the Director of Analytics at PolicyMic.