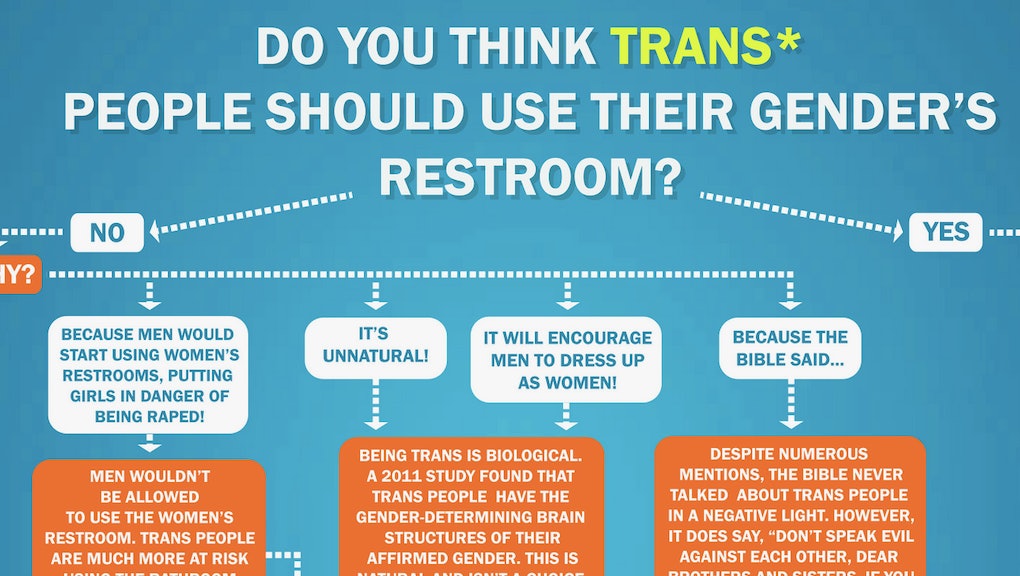 Which Bathroom Should a Trans Person Be Allowed to Use? Check This Chart

Trans Student Equality Resources, a group that's trying to make people aware of trans discrimination, has come up with a helpful chart for anyone confused as to why trans folks should be allowed to use the bathroom of their gender.

Currently there are an estimated 700,000 transgender individuals in the U.S., according to a 2011 report by the Williams Institute School of Law at UCLA, and there are likely to be many more who go unreported. California, Colorado, Hawaii, Illinois, Iowa, Maine, Maryland, Minnesota, New Jersey, New York, North Carolina, Oregon, Vermont, Washington and the District of Columbia also have laws specifically designed to protect transgender citizens from harassment or discrimination, although these protections vary greatly by state.

That still means that in the majority of states, transgender students and adults have no such protections.

Much of the court battles so far have centered around the issue of public accomodations policy. According to the Transgender Law Center, "any place that provides goods and services to the general public is considered a public accommodation... Transgender and gender nonconforming people often experience discrimination in their communities when accessing public accommodations including being refused service, being treated differently than their non-transgender peers, or being victims to harmful verbal and physical violence when simply trying to carry out their daily activities." In the context of trans youth, this debate often centers around public accomodations such as restroom facilities and lockerooms.

California has been at the forefront of this push for trans equality, successfully passing and then defending legislation that allows transgender students to play on the sports teams and use the bathrooms that correspond with their gender. That bill, passed last year, gives students the right to facilities in line with their gender identity, regardless of how school paperwork may describe them. In Maine, meanwhile, the state Supreme Court ruled ealier this year that transgender students should be similarly allowed to use the bathroom that corresponds with their stated gender identity.

The most common arguments raised against such inclusive legislation are that allowing trans people their right to public facilities of their choice is "so confusing" and "opens the door for predators," in words of one mother and grandmother who worked to repeal California's legislation. But these kinds of damaging and discriminatory myths have been debunked time and again.

The fight to keep trans individuals from gender-specific bathrooms has long been used as a tool to marginalize and exclude certain groups from participating in public spaces. But it doesn't have to be this way. Hopefully increased education and awareness campaigns like those spearheaded by Trans Student Equality Resources will help change the way Americans think about transgender rights in America. As the flow chart notes, it's not about giving anyone special privileges: It's just what a civilized human being should do.