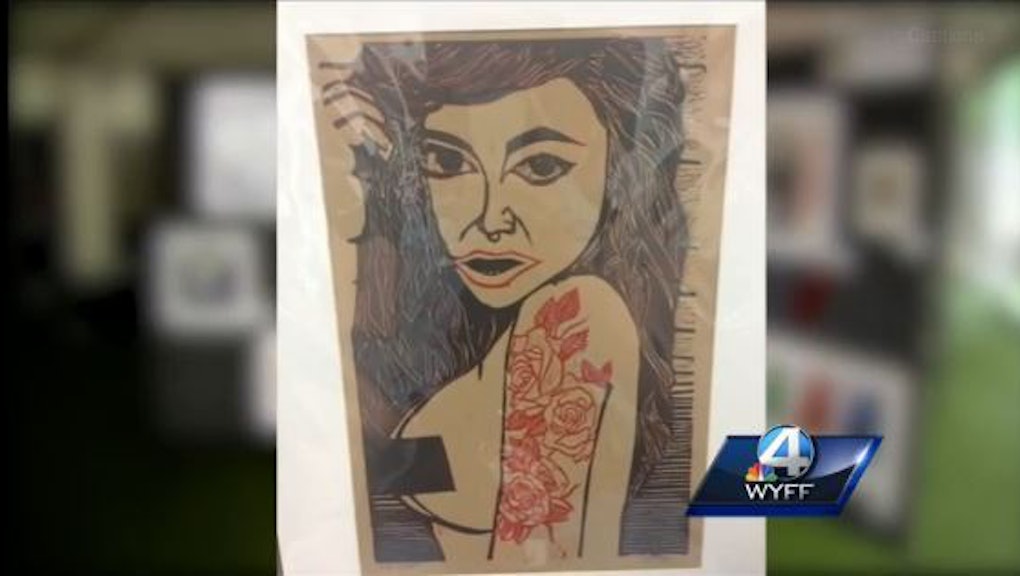 Gracie Holtzclaw, a senior at a South Carolina high school, was excited to learn that her artwork would be included in a county-wide exhibition. That feeling would be short-lived, however, as two days before the event, Holtzclaw's piece was unceremoniously pulled from the showcase.

What was so "inappropriate" about this young woman's piece that it warranted such censorship? A powerful image designed to raise awareness and spark debate about the misinformation surrounding sexual assault.

Titled "Rape Culture," Holtzclaw's print features a naked tattooed woman with a black censorship bar across her breasts. Holtzclaw told WYFF4 that the print was inspired by her own experience as a victim of sexual assault. The artist explained that she wanted to take a stand against a culture that tells women and men to cover up or take responsibility for being assaulted.

I started at an early age at a Christian school, locally, and we were always taught that it was our responsibility as women to cover up and be modest, and if a man was to ever get aroused or turned on or be interested in us, it was our fault... Eventually, I had gotten sexually assaulted. It was true when it happened. Everyone blamed me for it and told me it was my fault, and that just led the way into this art piece.

The irony of citing impropriety to censor a piece of art that speaks out against the consequences of sexual censorship was seemingly lost on the district spokesman, however. "This piece, for both title and content, was determined to be inappropriate for the District Showcase because the artwork is on display during a community event and can be viewed by small children," the spokesman told WYFF4.

Sadly, students and children are not immune to sexual assault because of their age; as Tara Culp-Ressler points out at Think Progress, some of the most infamous rape cases — not to mention cover-ups — in recent years have occurred among high schoolers.

And it's not just an issue of adults abusing minors or men assaulting women. A recent study showed that 1 in 10 youths between 14 and 21 years old admitted to committing sexual violence. Among the perpetrators, 50% blamed the victim, 60% said no one ever found out and fewer than 2% reported being arrested. This just goes to show that continued efforts to raise awareness of sexual violence and victim-blaming are important, even — and especially — among youths. The educational system should not be one that teaches people how to avoid unwanted sexual advances, like what Gracie Holtzclaw was taught, but rather one that tells perpetrators what kind of behavior is strictly unacceptable.

There's no reason at all that young people shouldn't be the ones to spread this message; high school students have been influential in changing the conversation about rape culture (and civil rights and LGBT equality etc.) before, despite attempts by authorities to censor them.

Silencing these students is not a wise idea, nor is censoring Holtzclaw's "Rape Culture" print, an artwork that highlights the need to speak out against injustice, while at the same time uses imaginative tools to engage others on important, if sometimes uncomfortable, issues. Isn't that, after all, the point of art? Rape culture may still be something many people clearly struggle with, but that doesn't mean they should attempt to stifle the next generation's attempts to talk about it.