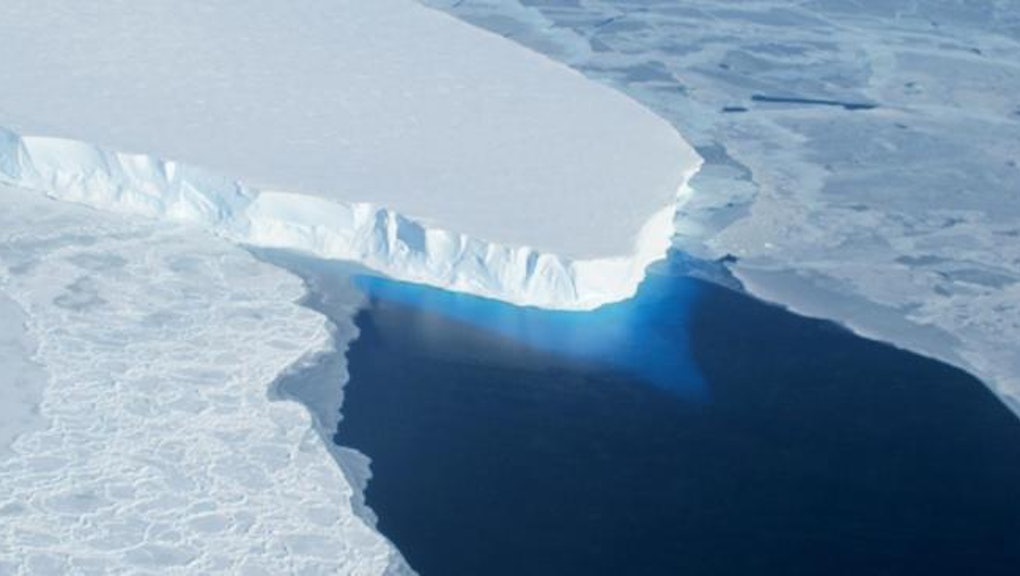 The news: A new joint study from NASA and the University of California, Irvine, has shown that the total collapse of large parts of the Western Antarctic ice sheet has begun and now appears totally unstoppable, indicating that a catastrophic 10-foot rise in global sea levels over the next few centuries may be inevitable. Calculations show the Thwaites Glacier — a receding chunk of ice supporting the rest of the much larger West Antarctic ice shelf — will be gone within a few hundred years, and after it, the whole region.

"This is really happening," NASA polar ice expert and researcher Thomas P. Wagner told the New York Times. "There's nothing to stop it now. But you are still limited by the physics of how fast the ice can flow."

"Scientists said the ice sheet was not melting because of warmer air temperatures, but rather because of the relatively warm water, which is naturally occurring, from the ocean depths. That water is being pulled upward and toward the ice sheet by intensification of the winds around Antarctica.Most scientists in the field see a connection between the stronger winds and human-caused global warming, but they say other factors are likely at work, too. Natural variability of climate may be one of them. Another may be the ozone hole over Antarctica, caused by an entirely different environmental problem, the human release of ozone-destroying gases."

Uh-oh. Yes, this is bad news. Scientists have essentially declared that the climate-change bottle has been uncorked and we are rapidly entering unfamiliar territory.

10 feet may not sound like a lot. But a rise of that size could devastate coastal cities. Here's what New York looks like with a six-foot sea level rise:

The total amount of land area lost would be pretty destructive on its own. (JFK International Airport would essentially cease to exist.) But with sea level rise of just five feet, even routine storms could cause as much devastation as Hurricane Sandy. Long-term, the only solution to mitigating massive danger to Eastern coastal cities may be surrounding them with storm surge barriers. The long stretches of sandy coastline between them (New Jersey, Maryland, the Carolinas, and Florida) will be even worse hit.

What to do: Nothing can prevent the collapse of the West Antartic ice shelf. Glaciologist Ian Joughin says any action would be "too little, too late" and "There's no stabilization mechanism" that could reverse the shelf's decline.

"The chain reaction is at a point that is unstoppable," said NASA's Jet Propulsion Laboratory researcher Eric Rignot.

Previous estimates put the potential rise in sea levels at 1-4 feet, an upper limit more than twice as high as the last official estimate in 200. Now it seems an even higher rise over the next few centuries is totally inevitable. Coupled with the increased length in droughts already noted by climate scientists, rapidly rising land temperatures, and the increased potential for disastrous storms and freak weather that accompanies hotter weather, the human species seems like it might be in for a rough couple hundred of years.