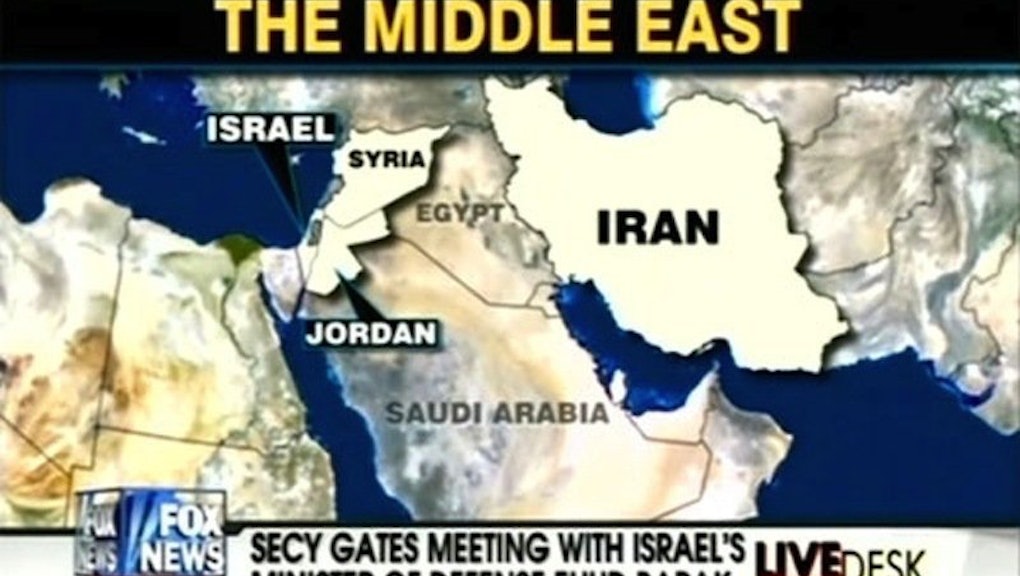 Let's face it: Americans have a bad reputation when it comes to knowing a thing or two about the world around them.

One year ago, on an international test designed by the Organization for Economic Cooperation and Development, Americans scored well below many of our peers. A 2014 National Science Foundation found that 1 in 4 Americans don't know that the Earth revolves around the sun.

One of our biggest and mostly highly rated news services, Fox News, isn't helping the "Americans are ignorant" stereotype when they air images confusing cities, states and whole countries. The Internet started tracking Fox News' mistakes, starting with a few big bloopers in 2004 amid the presidential campaign frenzy.

At one point, though, even Fox News had enough of its own mistakes. In 2009, Fox's leadership issued a statement on the network's repeated errors, promising better coverage from then on.

But the media company continues to make basic mistakes. Most recently, Fox News apologized for airing pictures of Asians in its South Korean ferry coverage that had nothing to do with the tragedy. And this past year, the network aired completely misleading infographics on Obamacare, although that's hardly a surprise. But mistaking Iraq for Egypt? That's something else.

Millions of Americans watch Fox News, and their repeated gross geographic mistakes aren't helping our — and their — reputation. Do viewers not notice them, or do they just not care? Here are nine geography mistakes Fox has broadcasted to the world. Brace yourself.

In 2011, coverage of Japan's nuclear power plant scare listed Shibuyaeggman as a city. Shibuyaeggman is not a city, but the name of a nightclub.

3. Bulgaria is Serbia, and Serbia is Hungary.

In 2012, Fox placed Bulgaria where Serbia is, and Serbia where Hungary is.

In July 2009, when covering then-Secretary of Defense Robert Gates' meeting with Israel's Defense Minister Ehud Barak, a map of the Middle East showed Iraq as Egypt.

The July 27, 2012, broadcast of Happening Now located anchor Greg Burke in Oslo, Germany. Oslo is the capital of Norway.

The network's coverage of a 2012 bomb threat at the University of Texas Austin included some faulty geography. First, it labeled Arkansas as Missouri.

7. Alabama and Mississippi are the same thing.

Then, Fox News switched Alabama and Mississippi on the U.S. map. If we can't get American geography right, how can we expect global geography to be correct?

8. Sydney is in the north of Australia.

In item #8, the article previously stated the map places Hawaii incorrectly on the map. However, the placement of Sydney, Australia is incorrect as it is placed in the north of the country when it is in the south.