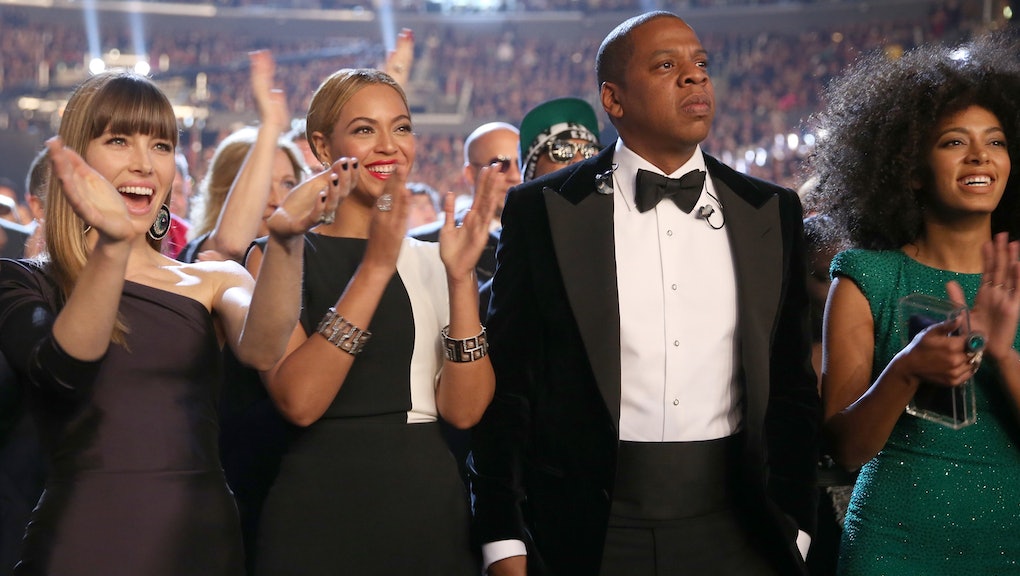 If You Loved the Jay-Z and Solange Fight, You Should See These Photos

By now, most people who pay attention to pop culture have heard of the video of Beyoncé's sister Solange Knowles attacking Jay-Z in an elevator. It's been played over the weekend ad naseum, generating hundreds of articles and blog posts, speculating on everything from how Beyoncé feels about it to what the craziest theories on Solange's motivations were.

But despite likely costing millions of dollars in media work hours and usurping real stories from the news, watching Knowles and Carter probably hasn't made you a more well-informed person. So in the interest of balancing it out a little, here are the six top photos of recent news stories you should know about:

Turkish miners anxiously awaited news of the fate of up to 130 coworkers trapped in a massive mining disaster in Soma, Turkey, where emergency workers on Tuesday were facing a toxic mix of carbon dioxide and carbon monoxide while attempting to extract them. Over 270 have died in the country's deadliest mining accident on record.

Armed gunmen triumphantly announced the victory of separatist referendums in the eastern Ukrainian regions of Donetsk and Luhansk. On Monday, pro-Russian groups that organized the vote claimed 89% of Donetsk voters and 96% of Luhansk voters approved of secession from the Ukraine. Already, heavily armed gangs of Russian-friendly militants are asking for the two regions to be assimilated into territorial Russia.

Soldiers stand guard in Gamboru village, Nigeria, where suspected Boko Haram militants carried out an unprecedented attack on May 5 that killed 300+ people and razed at least 1,000 shops. Tensions in the country have risen sharply as people throughout the West African nation have become outraged over the government's inability to fight the militants, who are still holding 276 kidnapped girls at gunpoint weeks after a raid on a school in the northeastern village of Chibok.

Pictured is West Antarctica's Thwaites Glacier, where climate change may have irreversibly damaged the entire region's stability. A joint study by NASA and the University of California, Irvine revealed that large chunks of the Western Antarctic Ice Sheet have already begun to collapse. The Thwaites Glacier will be gone within a few hundred years, and with it, the entire Western Antarctic.

"This is really happening," NASA polar ice expert and research Thomas P. Wagner told the New York Times. "There's nothing to stop it now. But you are still limited by the physics of how fast the ice can flow."

Experts predict that a catastrophic global rise in sea levels of 10 feet or more is now totally inevitable.

Federal Communications Commission (FCC) Chairman Tom Wheeler's net neutrality plan is falling into "chaos." Supporters of an open internet are accusing the FCC of arranging a pro-ISP pay-to-play scheme where content producers would be forced to pay ISPs large amounts of money for premium access to customers. Vitriolic criticism has spilled in from Internet companies, startups, venture capitalists, consumers, interest groups, and high-profile members of the tech industry.

A local officer stands by in Carlsbad, Calif. as wildfires continue to rage out of control across the state. Record heat and an ongoing drought have contributed to more than 1,350 California wildfires so far this year, nearly double the average of 700. Lead scientists have said that intense droughts across the globe are linked to global warming and climate change caused by the massive amounts of atmospheric carbon generated by industrialization.