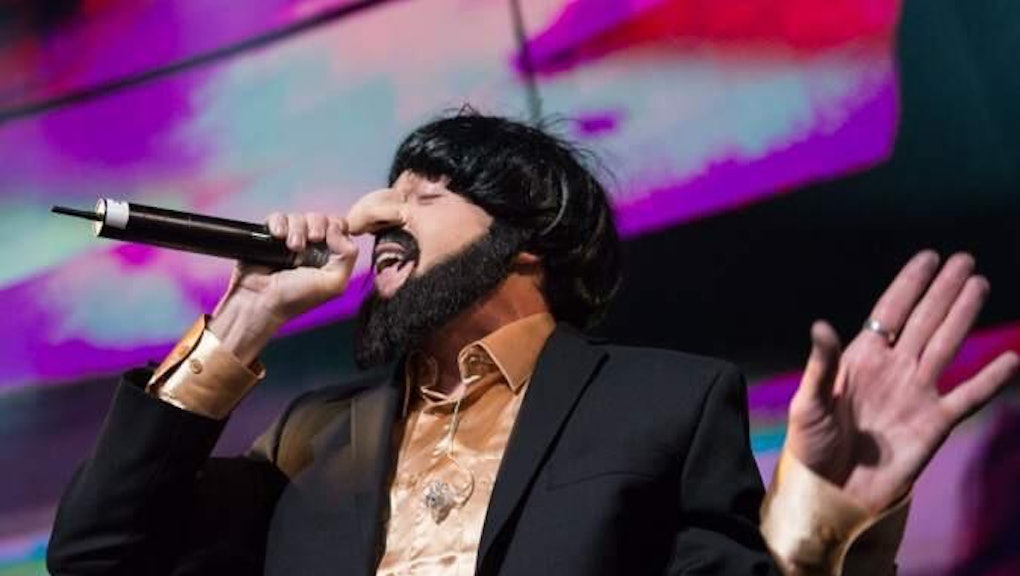 Almost four months ago to the day, rapper Macklemore was on stage making history at the Grammys. He had already won four Grammys, and he stood beside Queen Latifah wearing a Texas necktie, rapping the verses to his pro-gay right song "Same Love," while Queen Latifah married 34 couples — some gay, some straight — on live television.

28.5 million people watched gay marriages that night. Between that number and the lyrics of his vibrantly progressive debut record Macklemore has become the prodigal son of socially conscious hip-hop. But he's given his fans a real reason to question that.

On Sunday, when Macklemore appeared on stage in his home city of Seattle, Wash. he was wearing a different sort of costume. Usually, when he raps his first major hit "Thrift Shop," he wears a leopard-print fur coat to mock hip-hop materialism. He appeared on stage dressed as anti-Semitic stereotype, rocking a dark wig, a long hooked prosthetic nose, and a fake beard to sing his song "Thrift Shop." He turned a song written to critique materialism into an offensive parody of stereotypical Jewish frugality, and revealed himself to be a completely clueless and insensitive.

It almost goes without saying, but Twitter was outraged, with comedian Seth Rogen delivering one of the most biting critiques:

Macklemore defended himself by claiming ignorance:

His words rings hollow, though. The similarities between his costume and offensive caricatures are undeniable even if unintentional. These caricatures run through the bleakest periods of Jewish discrimination — they are a people with grossly exaggerated hooked noses and scraggly beards, viciously hording money. The accompanying "Thrift Shop" song choice and the following pseudo bar mitzvah joke make it difficult to believe that he was completely oblivious to what he was doing.

There's a strong case against him, but he really may be unintentionally offending here. He could well be talking about his beard; maybe he did just decide to join a witch's nose and a goofy beard just for the fun of it. It wouldn't be the first time that Macklemore has revealed his bumbling, buffoonish side. Two months ago, he posted a video of himself urinating in a public bathroom, while singing a song about putting the toilet seat down for ladies, joking that every toilet seat put down was a victory for social justice.

But that's just it — Macklemore's always talking social justice. He should know a seriously offensive costume when he sees one.

Macklemore is likely not an anti-Semite, but the costume is still offensive. An artist who positions himself as being actively socially progressive should be more conscientious of the way he presents his art. It matters to people because these are issues that matter. A man who began his career as Professor Macklemore should know better.