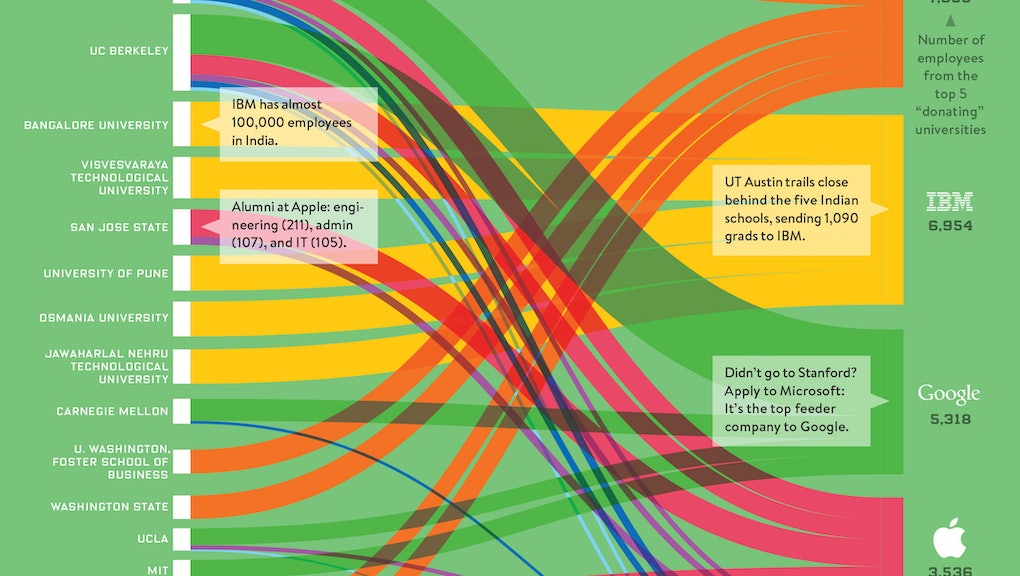 Stanford Is No Longer the Feeder School Into Apple, Facebook or Microsoft

If you're a new graduate, there is much to worry about: you have to face a mountain of student debt, a sluggish job market and a workforce that is increasingly giving up hope on finding employment.

But not all hope is lost. The tech sector — that shiny citadel of Silicon Valley — is still the fastest growing sector of American economy, and there are increasing opportunities for young, tech-savvy people with a head for business. And if you happen to have graduated from one of these institutions — well, you may have a head start.

For those interested in a career in tech, Wired combed through countless LinkedIn accounts and put together this handy chart to illustrate where top American tech companies' recruits graduate from. Stanford seems like an obvious feeder school for the Valley, but you'd be surprised to learn that it's not the number one school on this list; in fact, it's the University of Washington, which is the biggest recruiting ground for Microsoft.

And as for Google, Stanford and UC Berkeley are big feeder schools; but you have other opportunities later on down the road even if you don't graduate from these schools. For instance, Microsoft is the top feeder company to Google, so it's a good idea to build your resume there before you apply for a job at the search giant.

Ultimately, you will get hired based on the strength of your talent — but you can't ignore the strong alumni connections that are forged between certain universities and companies, or the extra recruiting effort that companies undertake at certain feeder schools. In this competitive economy, a leg-up can take you a long way, and the tech sector is no exception.