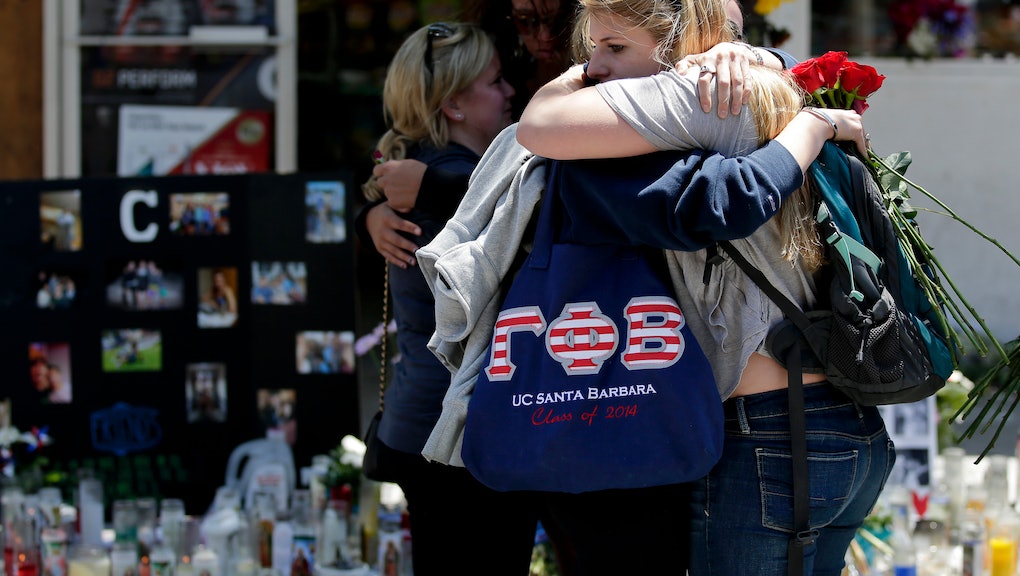 Just as past school shootings in America, the media has reacted by isolating the event as a monstrous and heinous act with no precedent. Rather than seeing Elliot Rodger as a product of society, the media has depicted him as a bloodthirsty madman, a mere glitch in the system. And yet the facts show a very different story.

Judging by the chilling YouTube video Elliot Rodger left behind, the gunman knew exactly what he was doing when he went on a shooting rampage with a semi-automatic. Frustrated by the fact that women, inferior creatures he felt like he was entitled to, rejected him romantically, he decided to get even. An excerpt from the video and a transcript from the Daily Kos show how deeply misogyny informed his worldview.

"I will punish all of you for it," he said before erupting in an almost satanic laugh.

"On the day of retribution, I will enter the hottest sorority house of UCSB, and I will slaughter every single spoiled stuck up blonde slut I see inside there. All those girls that I've desired so much, they would have all rejected me and looked down upon me as an inferior man if I ever made a sexual advance towards them. While they throw themselves at these obnoxious brutes. I'll take great pleasure in slaughtering all of you. You will finally see that I am in truth the superior one. The true Alpha Male."

What happened in Santa Barbara is nothing less than a hate crime, and yet mainstream news outlets are distilling the issue to "mental illness" and "premeditated mass murder." Although we should be shocked by Elliot Rodger's actions, we should not be surprised. In fact, most school shootings share chillingly similar characteristics. It's time we stop treating these incidents as anomalies and start recognizing the deep societal issues at play.

All but one of the mass murders in the U.S. over the last 30 years has been committed by men. The fact that gender is often omitted from the story speaks to how we still see the masculine as the irreproachable and invisible standard. As Michael Kimmel notes in his extensive research on school shootings, if the genders were reversed and most school shootings were committed by women, you'd bet gender would be part of the analysis.

We often instead shift the conversation to "mental illness" and describe shooters as madmen, while the characteristics they exhibit are often an extension of toxic masculinity ideals that are institutionally reinforced.

Details are still emerging, but according to the Daily Kos, Elliot Rodger subscribed to many Men's Rights Activists' (MRA) websites and may have adopted their radical ideology about women. The comments that motivated his killing spree were not far from many of the ones that are openly made by men in those communities. Even in the aftermath of the tragedy in Santa Barbara, a pick-up artist group (many of which often classify as MRAs) left a horrendous comment publicizing their services, as if their view of entitlement to women were valid in the first place.

2. Most school shooters are white

School shooters aren't just mostly male, they are also overwhelmingly white. Over the course of the last three decades, 90% of school shootings in high-school or elementary school settings were committed by someone white. As Michael Kimmel notes, white men who commit mass shootings want to take their own life as well as the lives of others around them. Kimmel describes this as a video-game-esque ploy where the shooters thinks, "If I'm going to die, then so is everybody else, they seem to say."

3. Most victims of school shootings are female

Although we often talk about the fact that men perpetuate most violent acts, we rarely acknowledge the other side of that equation: Women are most often victimized by men.

4. Many school shooters target females who have rejected them in the past

A study that looked at 15 school shootings between 1995 and 2001 found that romantic rejection was a common feature in most gun-related incidents. It is not uncommon for perpetrators to target ex-girlfriends or classmates who have refused advances. Elliot Rodger cited this frustration openly and specifically went after "sluts" who weren't interested in him.

5. Most gunmen exhibit a large sense of entitlement

Like many other school shooters, Elliot Rodger displayed a colossal sense of entitlement in his unsettling manifesto. He describes his inability to attract women as something he needed to "punish" them for. He describes the fact that women are not interested in him as an "injustice" and a "crime" because he is the "perfect guy." In an attempt to prove that he is the "alpha male," he decides to slaughter them. He believes he is entitled to women's bodies and, when denied access, he retaliates. "It's not fair. You girls have never been attracted to me. I don't know why you girls have never been attracted to me, but I will punish you all for it," he says.

This kind of attitude toward females can be seen in bullying patterns too. Although we tend to believe that girls bully girls and boys bully boys, cross-gender bullying is much more frequent than we think. When it occurs, it is often "unpopular boys" who are not deemed to be the Alpha Male by their peers who bully "popular girls." These boys seem to use bullying to prove their manhood.

We live in a society where being white and male affords one with countless privileges and, for some, a toxic sense of entitlement. As Michael Kimmel explains, "righteous retaliation is a deeply held, almost sacred, tenant of masculinity: if you are aggrieved, you are entitled to retribution. American men don't just get mad, we get even."

6. Many school shootings could qualify as hate crimes against women and girls

"You’re women, you’re going to be engineers. You’re all a bunch of feminists. I hate feminists."

This is what Marc Lépine said before killing fourteen women at a school in Montreal in 1989. Since then, similarly chilling school shootings have specifically targeted women and girls. In 2012, for example, when a 42-year-old man entered Oikos University, he only targeted women and killed six females. The only male casualty was the person driving the car he carjacked.

Although these were classified as school shootings, they are should also be considered hate crimes against women.

Although the gender of all the victims in Santa Barbara is not yet known, Elliot Rodger's motives seem to have been rooted in a profound hatred for women. Despite having killed three men, his intent to "slaughter" female students at the sorority house he entered were detailed in a gruesome 140-page manifesto released online. So far, two women have been reported dead, with more victims still in serious condition.