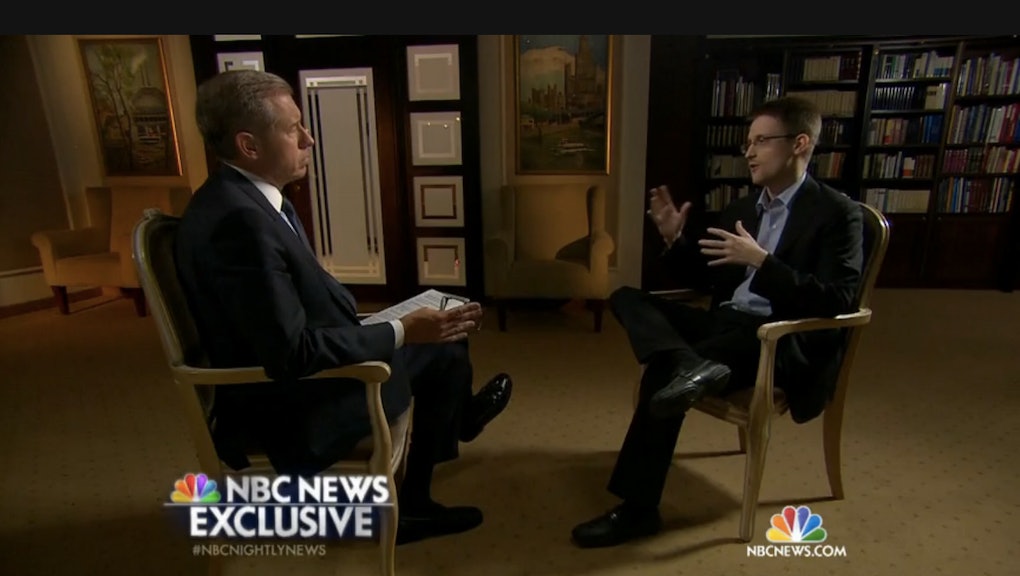 The news: Ever since his infamous NSA leaks, Edward Snowden has been plagued with rumors that he is a spy. In a new interview, the whistleblower comes forward and indicates that he may in fact have been involved in espionage — but not for the side you might think.

On Tuesday, NBC News uploaded a segment of its exclusive sit-down with Snowden, who is currently in Russia under temporary asylum. In the interview, Snowden addresses his pre-leak career and suggests that his involvement in the American intelligence community may have been deeper than what officials have led the public to believe.

"I was trained as a spy in sort of the traditional sense of the word, in that I lived and worked undercover overseas — pretending to work in a job that I'm not — and even being assigned a name that was not mine," Snowden told anchor Brian Williams. "So when they say I'm a low-level systems administrator, that I don't know what I'm talking about, I'd say it's somewhat misleading."

The background: Snowden's claims do not fit with the administration's narrative, namely that he was just a lowly IT guy who went rogue. When news of Snowden's flight first broke, President Barack Obama suggested that it wasn't even worth it to chase him down: "I'm not going to be scrambling jets to get a 29-year-old hacker," he said at the time.

But as the breadth and gravity of Snowden's leaks made headlines, the White House soon changed its tune. And as China and Russia facilitated the whistleblower's flight, the administration began taking a hard-line stance against countries and human rights organizations that sympathized with Snowden.

"Those groups do important work, but Mr. Snowden is not a human rights activist, or a dissident," White House press secretary Jay Carney said roughly a month after Obama's statement. "He is accused of leaking classified information, has been charged with three felony accounts, and should be returned to the United States where he will be accorded full due process."

Since then, top military brass has referred to Snowden as "a traitor," and just last month, former Secretary of State Hillary Clinton questioned his choice of asylum and suggested that the leaks may have had a negative impact on American national security.

"I think turning over a lot of that material — intentionally or unintentionally — drained, gave all kinds of information, not only to big countries, but to networks and terrorist groups and the like. So I have a hard time thinking that somebody who is a champion of privacy and liberty has taken refuge in Russia, under Putin's authority," Clinton said while speaking at the University of Connecticut in April.

Why this is important: According to Snowden, the portrayals put forward by the American government — that of a disgruntled computer technician or a treasonous hacker with an agenda — are inaccurate. Rather, he paints himself as an analyst who had access to high-level, confidential information and who grew disillusioned with the intelligence community and decided to share what he knew.

And that's precisely the image that the Obama administration wants to prevent from spreading: A bumbling IT guy or a dangerous hacktivist is one thing, but an average government employee who decided to turn against his country? That's plain embarrassing.

Earlier this week, Snowden's lawyer indicated that there were still ongoing discussions between Snowden and the American government to negotiate his return. At the time, it seemed as though the Obama administration simply wanted to see the whistleblower behind bars, even with a reduced sentence. But if Snowden's claims are indeed true, there may be another motive at play: to prevent someone with high-level American intelligence from falling into another country's hands. And given the long list of countries that have offered Snowden permanent asylum, they may want to act fast.