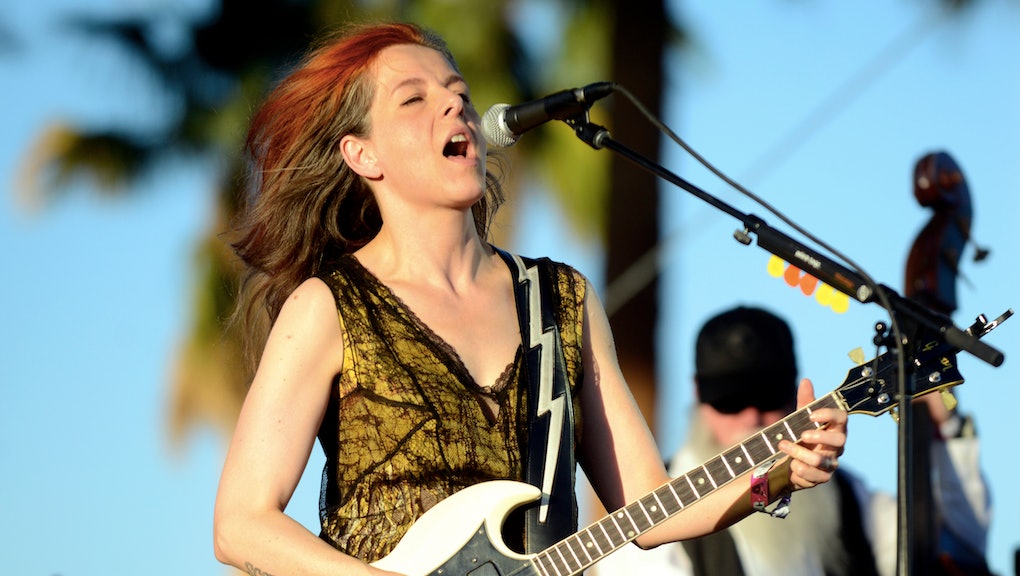 Case's anger is justified, because Playboy's gender-stereotyped take feels like it was written in 1960 rather than 2014. One exemplary line reads: "More thoughtful and mature and funnier than the typical female artist types, she's also not trying to ape the hunter-gatherer characteristics of her male counterparts." The point is clear: Case is great, for a girl.

Case is wrong, however, in saying that we should never celebrate a woman's accomplishments as they relate to her gender. Doing so can be a way to highlight women's voices in male-dominated fields. Problems arise when we look at women's art solely through the lens of their apparently inescapable femininity — yet that's what we do, nearly all the time, across almost every medium.

Last year, for example, Wikipedia sparked an outcry when its editors began systematically moving female writers from the category "American novelists" to a new list of "American women novelists." Wikipedia was not using this as an opportunity to celebrate women's writing; it was using it as an organizational hack to break up what had become a long, unwieldy list, and sending its readers a simple message in the process that "novelist = male." Author Meg Wolitzer railed against the change and pointed out what's wrong with general designation of a "women's fiction" category when she told NPR, "I mean, what is women's fiction? Do these books have anything in common, or is it just that the authors were all at one time or another in possession of a uterus?"

The same thing has happened in the TV world, the most recent example being near-constant comparisons of Comedy Central's hit Broad City to HBO's Girls — two very different shows being held side by side because they are comedies about young women in New York City. Blogger Sarah Lozano sums up what's wrong with this comparison nicely: "It's like saying South Park and The Simpsons are the same things, because they’re both adult animations. Worse it's like saying Star Trek and Star Wars are alike because they're both set in space. Ask any fan and they'll write you an essay on why you're wrong."

When the gender of the person in question is not specifically relevant to the topic at hand, this labeling is misguided at best; relegating women's work to its own sub-category implies that all work created by women shares some essential quality, and also that it is inherently different from (and often lesser than) men's work. Most disturbingly, the clarification that something was made by a woman — be it in the world of literature, film or music — is often viewed as a turn-off as well.

Here's where things get tricky, though: Done properly, the recognition of women artists as women can be a real force for good, too. Case was rightfully outraged, but her wholesale dismissal of the designation "women in..." isn't an answer. That's not because gender has any particular bearing on the quality of someone's work — it's because so many fields remain dominated by men and their tastes that it's sometimes necessary to remind the Playboy's of the world that women can and do make great art.

Case is a talented woman in an industry that too often treats women as sex objects first and artists second. Pointing out that she's a woman, in addition to being a musician, doesn't have to mean exploring her music through the limiting lens of gender; it can be a way to actively support and promote women's work.

Playboy messed up (really, though, what did we expect when its review was tweeted in between shots of women celebrating "hump day"?). But when used to amplify women's voices in male-dominated spaces and to challenge broader conceptions of how and what an artist should be, looking at women artists as just that has the potential to be deeply empowering. It's a fine distinction, but an important one.