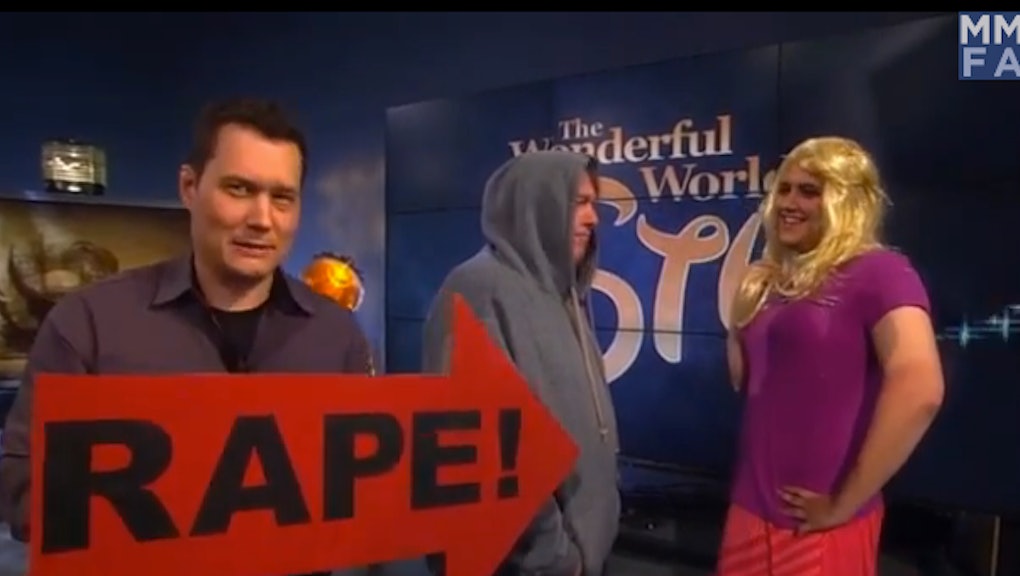 Glenn Beck is known for being controversial, but the conservative shock jock and his staff at The Blaze have reached an all-time low with the release of a disgusting skit that makes light of — wait for it — efforts to reduce sexual assault on college campuses.

Because if there's one thing rape survivors need, it's to be mocked and beaten down by a bunch of right-wing white dudes on conservative television.

The Blaze's Stu Burguiere leads the deeply ignorant segment, which is focused on the White House's claim that 1 in 5 college women report experiencing completed or attempted sexual assault since entering college. Rather than include actual facts and figures, Burguiere spends most of the video arguing semantics and making light of sexual assault through cartoonish "RAPE!" arrows and offensive caricatures acted out by hair-twirling men in drag.

Specifically taking aim at the 2007 Campus Sexual Assault Study and the 2010 National Intimate Partner and Sexual Violence Survey (NISVS), Burguiere first argues that something is rape only if the victim explicitly uses the term. "What's going on here is the president is saying these women were raped," Burguiere says in one his many utterly misguided sound bites. "And these women are saying they weren't."

Except that's not what's going on here on at all. Rape is one of the most underreported crimes in the world, and, as I've written about before, many survivors don't report because they don't realize they've been raped in the first place. Sexual harassment, abuse and violence have become so normalized that many girls brush such treatment off as "boys being boys."

One would assume that the wording Burguiere seems to take such umbrage with exists because many victims still think of rape only as something violent that happens at night, in the bushes, by a stranger. This lack of understanding as to what actually constitutes rape and sexual assault leads many men and women to grapple with feelings of self-blame and guilt in isolation, and prevents many perpetrators from being brought to justice. That is why surveys may use more descriptive than legalistic language in surveys of sexual assault — not to coerce people into thinking they're victims, but to aid them in recognizing when they actually are.

Things just get worse from there. Burguiere next cherry-picks a question from the NISVS that he believes is particularly confusing (not to mention funny): "When you were drunk, high, drugged, or passed out and unable to consent, how many people ever had sex with you?"

Conveniently glossing over the bit about someone being "unable to consent" and incredibly citing beer commercials as evidence, Burguiere tells the viewer, "News flash! I hate to say it, but it is possible to have consensual sex while drunk or high." He continues, clearly amused with himself, "If you eliminate sex while drunk or high, you eliminate about half the sex in the entire United States."

No one is saying that sex after alcohol is automatically rape, and yet a similar, and equally incorrect, argument was made by A.J. Delgado in her piece "Crying Rape" in the National Review Online — meaning this misconception (really, derailment) isn't just some fringe argument. To be absolutely clear: Yes, you can have sex while drunk or high. No, that is not rape. There's a huge difference between going home with someone after tossing a few back and having sex with a person who is too inebriated to say yes. We're all grown-ups here. Glenn Beck, and all of America, really, needs to know the difference.

Sadly, that's not even the worst part of the video. That distinction belongs to a segment in which Burgiere attempts to prove that "this survey was designed to massively inflate the number of [sexual assault] victims," by having a hoodied "rape expert" idiotically proposition a giggling woman (played by another colleague in drag).

Except, it's not. Again, Burguiere fails to back up his assertions with actual statistics, instead erroneously lumping all forms of sexual assault and coercion together with rape. In fact, while the survey did ask people whether they had sex with anyone who threatened them emotionally or lied, the survey did not classify such instances as rape. As Amanda Marcotte writes in Slate:

[The NISVS] put [such instances] in the entirely separate category of 'sexual coercion.' ... The [NISVS] covers a wide variety of abusive and violent behaviors, including stalking and domestic violence. The idea is to get a generalized view of how coercion and abuse play out in relationships, so questions about these milder forms of coercion are posed along with questions about more serious affronts. It's dishonest to claim the NISVS called 'telling lies' a form of rape.

For additional clarification, this is an actual chart from the study:

Beck has responded to the backlash to the video by saying that the alleged inflation of statistics "cheapens the horror of real rape" and makes "every college-age male into Genghis Khan." Tearfully admitting that his father was a rape survivor, Beck continues, "Don't you ever preach to me about what I can say and cannot say about rape ... Don't you ever try to tell me what victims should or should not feel."

But he's completely missing the point. In making light of campus sexual assault, this video is telling victims of rape — yes, real rape — that their experiences and feelings are invalid. Things like the White House's task force have nothing to do with turning all men into "Genghis Khan"; they're about supporting victims and more actively engaging men in these conversations. The Blaze reaches 1.4 million people on Facebook alone, and when so many are working so hard to educate men and women about what consent actually means — to prevent future crimes — the spread of this sort of misinformation is not just in poor taste. It's dangerous.