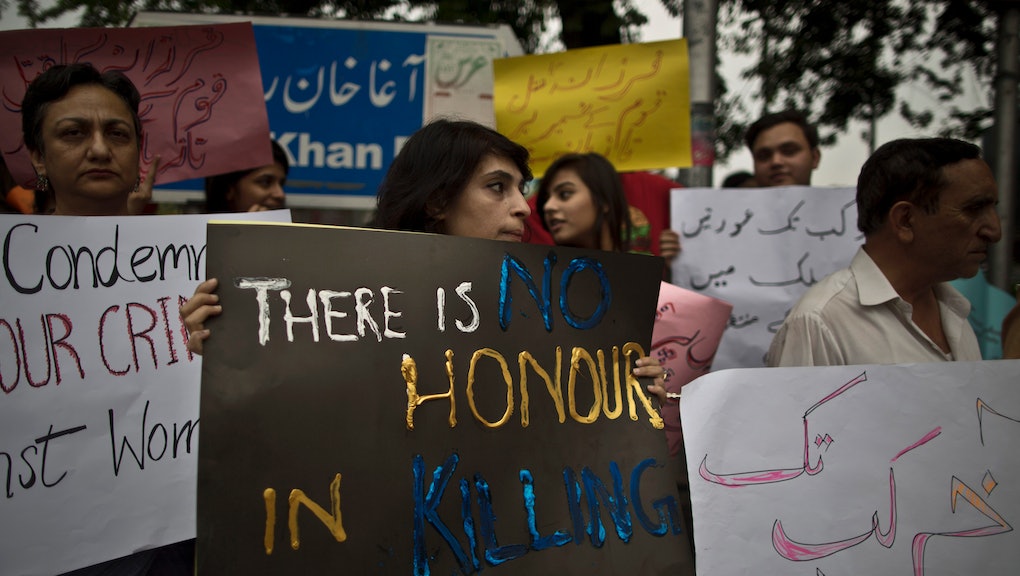 What the Western Media Gets Completely Wrong About Honor Killings

Last week, horrifying news came out of a small village just outside of Lahore, Pakistan: Farzana Parveen, 25, was brutally murdered outside a courthouse by an angry, small mob of her own relatives, while a group of 30 others, including police, watched.

Angered by her marriage to a man they did not approve of, Parveen and her husband, Muhammad Iqbal, were attacked with sticks and bricks. While Iqbal survived the attack, Farzana, who was pregnant, did not survive. The story took an even more morbid turn when Iqbal revealed that he killed his first wife in order to marry Farzana.

Image Credit: AP. Muhammad Iqbal sits in an ambulance, next to the body of his murdered wife, Farzana Parveen.

Then, just a day later, more terrible news came from the Asian subcontinent: Two young Dalit girls, aged 14 and 15, had been gang-raped, killed and hung from mango trees in the town of Katra in the Indian province of Uttar Pradesh. When the father of one of the girls, who were cousins, had reported the two missing to local police, the authorities ignored his concerns.

And just as it goes with these tragedies, the subsequent conversation focuses on pinning this sort of violence on the primitive nature of a culture and a type of hatred for women that is seemingly intrinsic to them. It is never about the actual factors — the weakness of governance and police institutions, the limited or no access to education and the general failure of the rule of law — that allow the most vulnerable in society (poor women) to be abused. Instead, it's about the factors that make it easier, for us anyway, to understand the headlines.

These aren't the first instances of rape and murder where the subcontinent and its "culture" have come under media and worldwide scrutiny. In 2012, India (and Indian men in particular) was caught in the global spotlight of criticism with the gruesome gang rape and murder of an anonymous 23-year-old woman known simply by the pseudonym "Damini." The international outcry prompted protests across several of India's urban centers and led to sociological inquiries into the nature of the Indian man and Indian sex culture in online opinion spaces. India, some argued, had a "woman problem."

Pakistan, too, has often received attention for so-called "honor killings" and "honor-based violence" — weak terms that simultaneously exoticize and obscure violence against women and the factors that mitigate its cultivation. The "backwardness" of tribal culture and the supposed acceptability of violence championed by the imposition of Islamic law are called in as the primary culprits.

But in reality, the only "culture" to blame here is a culture of impunity toward violence against women, which exists in the West, too.

The recent American coverage of 22-year-old Elliot Rodger's murderous rampage just outside UC Santa Barbara's campus is testament to how a domestic conversation on violence against women is near-impossible to have in a nuanced, accurate, non-sensationalist manner. Rodgers was explicit in his reasoning for wanting to "slaughter" all women: He hated them for, as he believed, denying him his entitlement to sex; he was the "perfect guy" and no woman could see that. Media coverage and even the local authorities, however, near-absolved Rodgers' misogyny extremism by labeling it as an act of "mental illness." And this wasn't the first time they did that.

When a 16-year-old girl was raped in 2012 by two high school star football players in Steubenville, Ohio, some in the media lamented the two boys' loss of a "promising future." When the decades-long child sex abuse scandal at Penn State University broke out in 2011, the focus was on the "tragic" fall from glory of the revered coach, Joe Paterno.

The recent murders and rape of women in South Asia — the ones to make it to our newsfeeds, anyway — are abhorrent and also the result of a culture of impunity for the safety and worth of women, specifically poor women. The real scary thing should be, however, that that very same culture isn't so far from home.