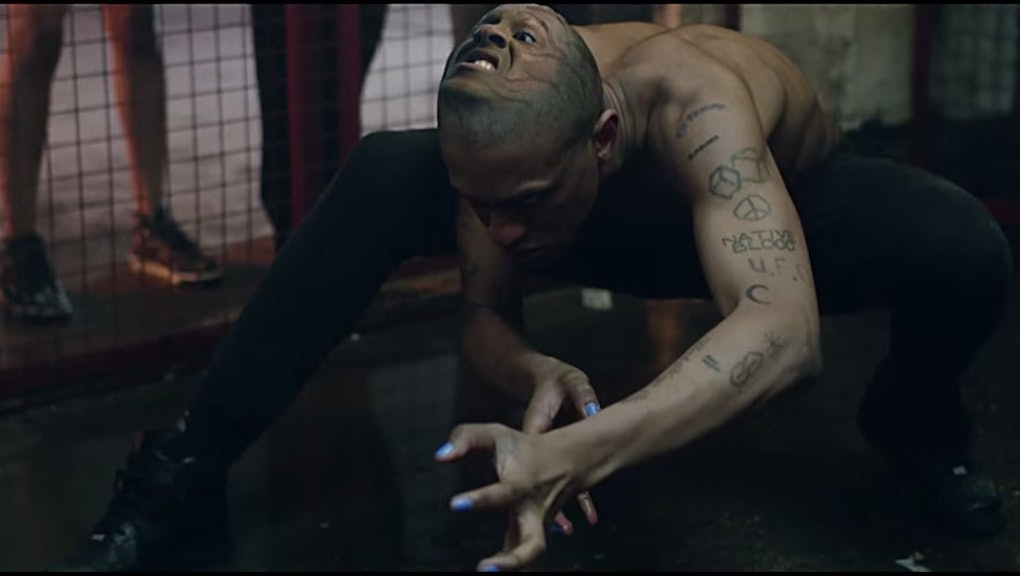 Last week, queer Brooklyn rapper Mykki Blanco released her music video for "She Gutta." The film features burning crosses, footage from drone cameras of children running through streets and plenty of violence. But compared to Blanco's video for "The Initiation," in which the rapper mutters pitch-shifted Latin spells while sprouting a second face on top of his head, it was nothing.

Music like this isn't exactly what most people think of as music. It terrifies, but it doesn't soothe or inspire. Yet audiences increasingly seek scary music. Once a subgenre of rap, horrorcore has moved increasingly into the mainstream through up-and-coming acts like Blanco or, more prominently, acts like Odd Future (who make scary threats to the people who call them horrorcore) or Kanye's now-infamous Yeezus. But there's a deep-seated reason we seek out this kind of music — why it feels so good to be terrified by grinding bass and pitch-shifted voices. Our brains have evolved over millenia to bring us to the point where we can truly and honestly say "I liked Yeezus."

Sound and music are actually uniquely capable of inducing terror because there's an evolutionary advantage to being sensitive to sound. Even though humans have highly-developed visual faculties, our eyes only work well in the daytime. It is much more likely that we will hear a dangerous predator creeping up on us before we see it. So our ears have special pathways to the fear-producing centers of our brain. These pathways enable us to produce immediate surges of adrenaline at the first snap of a twig, the sound of a window breaking in the next room or Kanye West bellowing "I am a GOD" on a pair of Beats headphones. Then, we run.

So why is that enjoyable? It's because that fight or flight response also comes with a big rush of dopamine, a chemical that controls our feelings of pleasure and well-being in the brain. Hollywood's sound engineers are masters of manipulating this feeling of fear and then release. That creeping quiet right before the monster strikes is so unnerving because our ears are searching for ways to assess the threat. Once the fright is through, listeners are left riding an incredible dopamine high. That's why turning the sound off effectively anesthetizes horror films. Observe:

Music, fear and pleasure have always been related, then. Scientific studies have found that animals with a stronger ability to distinguish pitches also have a heightened ability to specialize their emotional responses to given situations. There is a direct link between our ability to interpret pitch variations and our ability to feel. Dissonant music puts our pitch-interpreting abilities to the test because they're unfamiliar. We get a cognitive workout struggling to derive an appropriate emotional response to such a challenging group of tones. And when all that tension gets released back into a more harmonic or normal passage, we experience a tremendous rush.

And, as with many fundamental human behaviors, that impulse is strongly related to our sex drive. Psychologist Arthur Aron performed a study in 1974 in which he forced subjects to face a very common fear — the fear of heights. Half of the participants had to cross a deep chasm via a precarious suspension bridge, while the control group walked across a low, safe bridge. When participants successfully crossed their bridges, they were met by a beautiful female researcher, who asked them to tell stories based on an image prompt. The men who crossed the terrifying suspension bridge included a lot more sexual imagery in their pieces and were more likely to call the female researcher to ask for information about a "follow-up" to the study than those who crossed the safe bridge.

There is something incredibly sexy and challenging about being afraid. It's why most horror movies have at least one gratuitous sex scene, and why the sexual imagery in a grating song like Kanye's "Blkkk Skkkn Head" feels intuitive.

But everyone has a different tolerance for these things, and certainly not everybody likes Yeezus. But on some fundamental level, when music scares us, that's because we want to be afraid. It feels good to let loose.