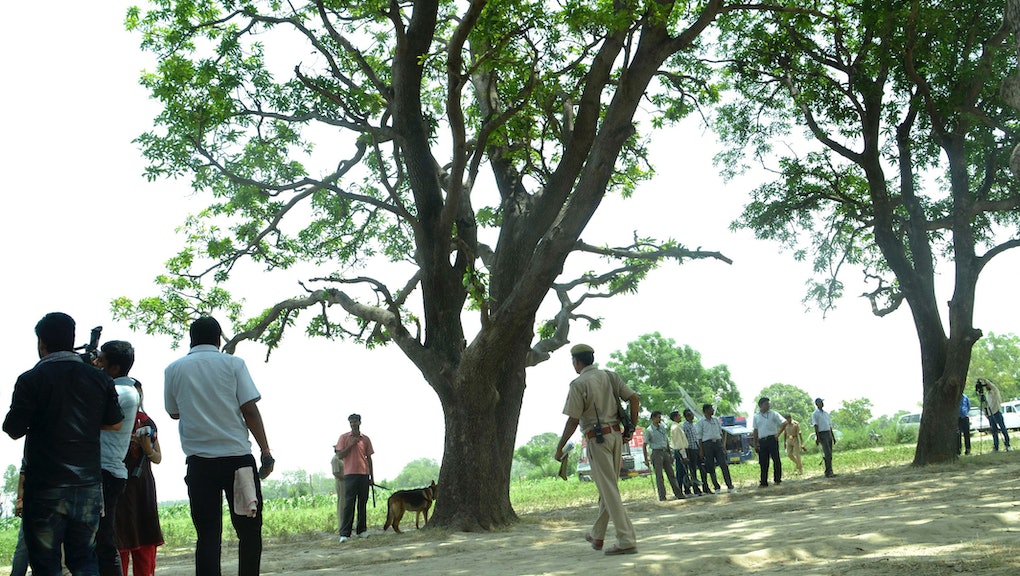 What the Media Keeps Getting Wrong About India's Rape Crisis

Horrific images of two teenage girls, their limp bodies swinging from a mango tree in Katra village in northern India, have made international headlines recently. These two "low" caste Dalit girls were allegedly abducted while relieving themselves in a field at night, and were subsequently gang-raped and lynched by men from their village.

The police ignored the initial kidnapping of the cousins, 14 and 15, so to protest against police apathy and inefficiency, the girls' relatives did not allow officers to take down the bodies from the tree until they were reassured that the case would be investigated properly, and the suspects were arrested.

Image Credit: AP. A candlelight vigil and protest in New Delhi, against the gang rape and lynching of two teenage girls in Katra.

The grim picture of the lifeless girls swaying under the tree's wide foliage has become symbolic worldwide of a brand of sexual violence that has rocked headlines in the past few years. But a single image hardly ever tells the entire story.

It's always the most violent and horrific attacks that manage to become news abroad, and unfortunately, the quick explanations for this brand of violence are boiled down to notions of culture, oftentimes using lazy stereotypes to shade in the details. This is inaccurate, and ignores the realities of violence against women in India.

Image Credit: AP. Women shout slogans during a protest against the rapes in New Delhi.

For those consuming news about India in the Western world, the last time sexual assault in India made the mainstream news in a big way was when a young woman was gang-raped and fatally tortured in a moving bus in Delhi in December 2012. The coverage at the time labelled Delhi as the rape capital of India and India as the country with a "cultural problem" of misogyny. It is perhaps surprising, then, that despite the endemic violence against women in India as relayed by Western media, there haven't been any big news splashes on rapes in India since December 2012 (coverage of other cases, such as the rape in Kolkata in 2013, the rape of a photojournalist in Mumbai and the recent marital rape case, has been far and few in between).

In Western media's sporadic and reductive coverage, the idea that India is a country plagued by rampant, "extreme" sexual violence becomes an all-too-familiar trope. Take, for example, the Huffington Post, which said that the tragedy has "recast a light on rampant sexual violence in the country," or the Guardian, which described it as "the latest in a series of incidents in India involving extreme violence against women."

This focus on "rampant" and "extreme" simultaneously manages to overstate and understate sexual violence in India. On the one hand, the Western media alleges that India has a "cultural problem" when it comes to violence against women; on the other, it refuses to take notice of rapes and sexual violence, let alone sexual harassment, that are not "extreme" enough to make headlines.

This scandal mentality is problematic not only for denying women's experiences of sexual violence in the developed world, but also for minimizing the pervasiveness of violence against women in India. The reality is that the sort of violence faced by women, particularly in a country as large as India, hinges on a wide range of factors that are usually left out of the narratives around these attacks.

The two girls were abducted while relieving themselves in the fields at night, because like millions of families in India, they did not have a toilet at home. Meanwhile, an urban Indian might not fear rape when using the toilet in her apartment, but she might risk it when she gets the auto-rickshaw from her office to home. An Indian high-flying executive might not worry about being groped on the bus when in her chauffeur-driven car, but she may be assaulted in her boss's private office.

And this is the problem: Singling out horrifying incidents glosses over the varied experiences of sexual violence in India. Not highlighting and challenging "low-level" violence — groping, pinching, stalking, threatening — because it's not outrageous enough sends out the message to both women and men that the line of acceptability can be pushed and toed.

When the two teenage girls first went missing, their family approached the police, but the police ridiculed them and did nothing for more than 12 hours. Perhaps the girls had been harassed by these men in their village before, but never thought of reporting it, because they were aware of the police's apathy and the lack of weight their complaint would carry. Despite stronger laws against sexual violence following the December 2012 gang rape, including punishment for stalking, it took the girls to be gang-raped and lynched before the state and the media took notice.

The rapes of the teenagers should definitely bother us, but not just for the brutality and extremity of lynching, which makes for watchable news.