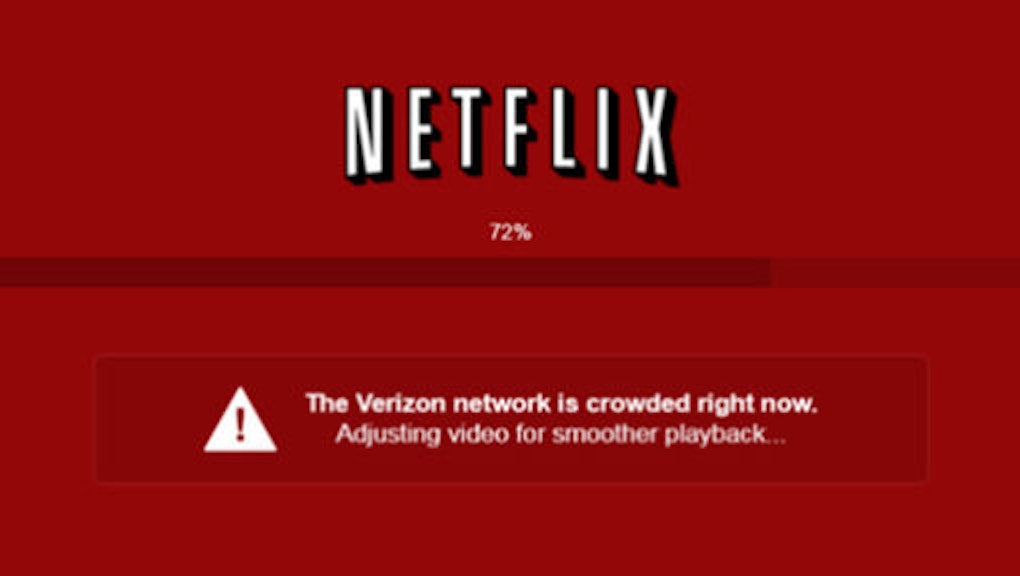 The news: The war between Netflix and Internet service providers (ISPs) reached a new height — or shall we say, a new low — on Thursday as Verizon threatened the streaming giant with a lawsuit, all because of a pop-up message.

Earlier this week, Netflix began displaying a rather passive-aggressive message to customers who were experiencing slow streaming speed. Some people received notifications that their ISP of choice — Verizon, AT&T and others — was "crowded right now," and it felt as though Netflix was squaring the blame on them.

Obviously, Verizon was not going to take the challenge lying down. It took just one day for the telecom to issue a cease-and-desist letter demanding that Netflix take the message down and provide a list of customers who received it.

"Failure to provide this information may lead us to pursue legal remedies,'' warned Verizon general counsel Randal Milch. "There is no basis for Netflix to assert that issues with respect to playback of any particular video session are attributable solely to the Verizon network."

But Netflix is treating the letter as another example of Verizon's bulldozing tactics. "This is about consumers not getting what they paid for from their broadband provider,'' Netflix spokesman Jonathan Friedland said. "We are trying to provide more transparency, just like we do with the ISP Speed Index, and Verizon is trying to shut down that discussion."

What are they arguing about? This is all part of Netflix's escalating fight with the ISPs — Verizon is just the latest opponent.

For months, the video streaming company has been taking the Federal Communications Commission and ISPs to task over net neutrality regulations. Netflix was one of the more than 100 tech companies that sent a letter to the FCC to criticize its proposal for "fast lane" Internet, which would allow ISPs to charge more for tiered, premium service. The company has publicly attacked the proposed Comcast-Time Warner merger over fears of monopoly, and has rallied its users and shareholders to stand up to the big-time telecoms.

But while Netflix might look like it's fighting the good fight for a democratized Internet, it has a financial stake in the outcome as well: in recent months, the company's service has been held hostage by ISPs, which demanded higher pay to stream the site's data-heavy video. Netflix had to sign a new, more expensive deal with Comcast and Verizon to get its speed back up — as depicted in the graph below:

So Netflix is not fighting the ISPs for an altruistic reason; nonetheless, its interests are aligned with the consumers'. Lack of protection for net neutrality has already shown that ISPs can arbitrarily raise prices and force content providers to cough up more money — or else. That's not a business negotiation, but a mob shakedown, and if companies like Netflix keeping meeting their demands, it's the customers who will have to pay the deferred cost so that Orange is the New Black loads properly.