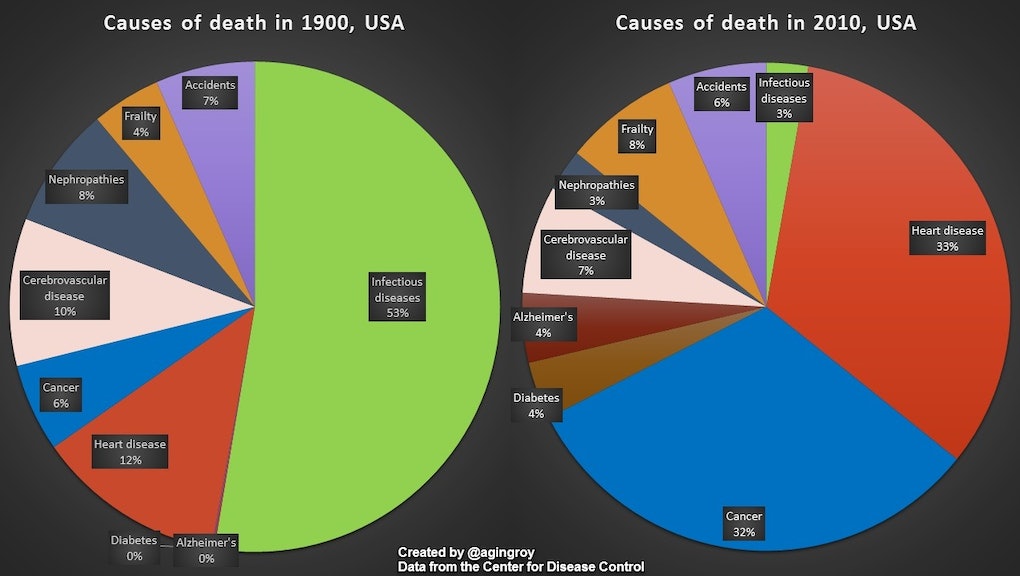 How Americans Died in 1900 vs. Today, in One Chart

In the U.S., average life expectancy rates are the highest they've ever been at roughly 79 years, according to the CIA, which is almost double the average back in 1900, which tallied in around 47 years. As a nation, we're living longer, but when we are dying, we're dying of different diseases than our turn-of-the-century ancestors.

Created by Oxford University Ph.D. student Avi Roy, this visualization utilizes data from the Centers for Disease Control and Prevention to map out the causes of sickness-related deaths in 1900 and in 2010 in the U.S.

What am I looking at? By painting a picture of how we're dying now versus 110 years ago, there are a number of trends that can be identified.

To start, it's clear that diagnostics have greatly improved and people are simply living long enough to get certain diseases instead of others.One hundred years ago, scientific technology wasn't in the same place to deal with a number of what are now considered simple-to-treat infectious diseases.

Additionally, as a number of new vaccines were introduced over the years, diseases like measles, mumps and whooping cough started to fade away (though, thanks to some anti-science people, they're making a comeback). These factors explain how infectious diseases went from the by-far biggest cause of death in America to a relatively minor one today.

Causes of death like diabetes and Alzheimer's were nearly non-existent in 1900, partially again because other health problems would have overridden them, but also because the cause of death would be have ascribed to something else. Regarding Alzheimer's specifically, because the disease is overwhelmingly diagnosed to people over 65, most Americans simply weren't living long enough to suffer from it.

New culprits: Longer lifespans and better treatment of infectious diseases are also the likely culprits behind the rises in heart disease and cancer. Now that people are living longer and less worried about simpler diseases, people are in a greater position to suffer from these problems, which now combined make up 65% of death in America. Looking at this map from Slate, it's clear these are America's worst killers.

Because of the less advanced understanding of the human body and health, it's possible that some of the CDC's numbers aren't totally accurate, but that can be at least partially attributed to the science. Not knowing what a certain illness or disease was could have led to its classification among the broad "infectious disease" category.

Clearly, scientific progress has made great leaps since 1900 (for example, it wasn't until 1901 that Karl Landsteiner discovered the existence of different human blood types). But perhaps nothing more clearly demonstrates this than our causes of death over time. Though terrible diseases like cancer and heart disease ravage the country, at least your doctor isn't prescribing you a course of bloodletting.